Is race war in America inevitable?

I saw this on JPFO


Several friends and I have talked about this for the past 15 years or so..  My friend Shell had coined a phrase "Balkinization" back in the mid 90's
to describe the fracturing of America along racial lines.  When the common glue of our language and customs are cast aside in the name of cultural communism diversity, people no longer have that common bond.  Also until recently we as Americans believe that we exceptional, but now due to cultural marxism diversity and affirmative action, we are told that we are to blame for most of the worlds ills.  When a people believe that they can do anything, they can, when they are told that they cannot, they won't.  In the 1800 and most of the 1900,s we were told that we had a manifest destiny
I do differ with the author of this book I believe that "new africa" if it happens will not be in the part of the south that is Louisiana and Mississippi, part of Tennessee and heading to Illinois.  But that is my opinion. due to population shifts.


"History is littered with wars which everybody knew would never happen."
Enoch Powell, ex-member of the British Parliament. 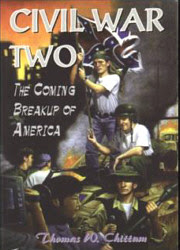 Thus opens Thomas Chittum's disturbing book Civil War II. With chilling precision, Chittum outlines the realization that America is headed the way of the Soviet Union and Yugoslavia … Balkanization, or, as the subtitle to the book proclaims, The Coming Breakup of America. If our illustrious President wants us to "dialogue" about race, we'd better face the lessons of history that Chittum identifies in this book. You may not agree with Chittum's conclusions, but every American, of any race, should be familiar with the disturbing similarities between the bloody paths other nations have followed and the path America seems to be blundering along.
Chittum is a military analyst who has had hands-on experience with war, specifically civil wars. He fought for the U.S. Army in Vietnam in the '60s, the Rhodesian Territorials in the '70s, and with the Croatian Army in the '90s.
Apparently, multi-cultural, multi-racial, and multi-ethnic democracies don't last very long, if they even get started in the first place. The minute a single race, religion or ethnic group loses a large majority in a nation, that nation begins to undergo internal fracture. Chittum points out that the fall of the Soviet Union had as much to do with an incredible growth of Islamic forces in the various conglomerates of the Soviet Empire as did the arms race with the West. In the case of America, we shouldn't "celebrate diversity," we should fear it.
Civil War II will start in the American Southwest. Actually, it has already begun. It is called the "Reconquista," or in English, the Reconquest. An estimated two million illegal aliens, mostly Mexicans, have now infiltrated and occupied a huge swath of American soil that stretches from Los Angeles to New Orleans and up into New Mexico. Mexican and Latino radicals have already given this nation-to-be a name: "Aztlan." A beachhead has been established. Mexico will erupt into a revolution within the next 20 years. This revolution will either be brutally put down, as in the recent Chiapas uprising, or it will succeed and a new, likely Marxist, government will take over. In either case, further millions of Mexicans, attempting to escape the bloodshed and even more depressing poverty, will flee north across the American border and into the Southwest. The conflict between the whites and the Hispanics will be exacerbated by the fact that one group speaks English and the other Spanish. One group is brown and the other is white. The inevitable "them vs. us" division will occur because the opposing forces can be immediately identified by skin color and/or language.
So re-draw your map of 21st Century North America with "Aztlan" occupying the territory (plus a little extra) that was once Northern Mexico before the "Gringos" stole it. Toss in Southern Florida, because the Cubans are there to stay.
Malcom X, and now Louis Farrakan, have called for a "Black Homeland." Demographics are beginning to outline the shape of this second nation-to-be. Middle class and working class blacks are moving back to the Old South in increasing numbers. As the Reconquista progresses, blacks in Southern California will be stuck between a rock and a hard place; a growing resentment against the Hispanic tidal wave will be mixed with the age-old resentment against the white race. Patience and compassion go out the window when social misery meets ethnic and racial diversity. This is simply a pragmatic, coldly realistic lesson of history. All liberal, social engineering mumbo jumbo aside, when the fecal matter hits the fan, people prefer to be with their "own kind." So draw in "New Africa" on your map of 21st Century America. This will be most of the deep South.
North of New Africa and Aztlan will be an all-white nation stretching to the Canadian border or perhaps blended with several provinces of Canada. In 1992, the white race was 75% of the American population. If one were to travel through only the rural Northern U.S.A., one would likely assume that this is a nation of exclusively white people. Minorities have historically occupied enclaves in cities in the North. In 2050 the white race is expected to have been reduced to 52% of all Americans. Non-white immigration and the greater birth rate of blacks and Hispanics are fueling this trend.
There is a problem that prevents this demographic transition from remaining peaceful. The Mexicans want that land back. They will take it back, not simply ask. Black and white property owners in the fermenting nation of Aztlan will not likely relinquish their property without a fierce struggle. Likewise, southern whites, some of the most irascible critters on Earth, will not gently surrender their property to waves of black refugees. As the bloodshed against whites by blacks and against blacks by whites increases in the South, the black enclaves in Northern American cities (i.e., ghettos) will erupt into street warfare.
The armies are already in place. Our federal government estimates that 500,000 young men, predominantly black and Hispanic, are members of street gangs. These fellows have guns, money and a highly-organized hierarchy, because, as Chittum perceptively points out, the leadership of gangs is decided by cunning, street-smart business acumen (the drug trade), and a merciless willingness to eliminate rivals for power. The leadership of street gangs is Darwinian, while the leadership of our police and military agencies has to do more with whose ass you kiss than whose as you kick. Given equal armament, the street gangs are potentially better warriors.
Don't get mad at Thomas Chittum for his pragmatic insight. His book is controversial and opinionated, but it is not a racist screed. You just might as well get mad at the weatherman who tells you a hurricane is coming. Instead, read the book. Read it as soon as you can, and think long and hard about what is said. Civil War II is available from American Eagle Publications ($16.95, priority post and handling included), POB 1507, Show Low, Arizona 85901, 800-719-4957. Or order it from your local book store (ISBN#0-929408-17-9)
Posted by MrGarabaldi at 12:28 PM