E.U Agrees to a bailout of Greece to the tune of 172 billion EURO 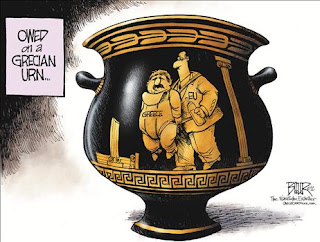 I was reading this article, I have been harping on debt almost as soon as I started blogging.  The E.U thinks that they bailed out Greece, but they basically kicked the can down the road.  Greece will not implement the austerity measures, the politicians have promised soo much free stuff to the population, now the bill is coming due and the population are angry.  They still want all their "free stuff" that has been promised.  The same thing will come here in a few years when the democrat base want their free stuff and the spigot shuts off.
Something that I noticed in this article is that the government will legislate to force the bondholders to eat the loss.  This disturbs me on several levels  The government will legislate you to lose your money to accept a political settlement?   What happened to the rule of contract law? What about the indenture terms?  The government by imperial fiat made a decree and removed the collective action clause.   What does this do for the bond market?  I guarantee private investors will dump bonds as soon as they are able.  People buy bonds for investments and as a way to save their money in a volatile market.  After this and the imperial edict, they will bail.

By Annika Breidthardt and Jan Strupczewski
BRUSSELS (Reuters) - Euro zone finance ministers agreed a 130-billion-euro ($172 billion) rescue for Greece on Tuesday to avert an imminent chaotic default after forcing Athens to commit to unpopular cuts and private bondholders to take bigger losses.
The complex deal wrought in overnight negotiations buys time to stabilize the 17-nation currency bloc and strengthen its financial firewalls, but it leaves deep doubts about Greece's ability to recover and avoid default in the longer term.
After 13 hours of talks, ministers finalized measures to cut Athens' debt to 120.5 percent of gross domestic product by 2020, a fraction above the target, securing a second rescue in less than two years in time for a major bond repayment due in March.
"We have reached a far-reaching agreement on Greece's new program and private sector involvement that would lead to a significant debt reduction for Greece ... to secure Greece's future in the euro area," Jean-Claude Juncker, who chairs the Eurogroup of finance ministers, told a news conference.
Greece will be placed under permanent surveillance by an increased European presence on the ground, and it will have to deposit funds to service its debt in a special account to guarantee repayments.
The 5 a.m. deal (0400 GMT) was hailed as a step forward for Greece, but experts warned that Athens will need more help to bring its debts down to the level envisaged in the bailout and will remain worryingly "accident prone" in coming years.
By agreeing that the European Central Bank would distribute its profits from bond-buying and private bondholders would take more losses, the ministers reduced Greece's debt to a point that should secure funding from the International Monetary Fund.
Italian and Spanish bond yields fell amid relief among investors that a threat to the wider euro zone had been avoided, although expectations of an agreement had been largely priced into foreign exchange and stock markets.
"It's an important result that removes immediate risks of contagion," Italian Prime Minister Mario Monti told a news conference.
"A nightmare scenario was avoided," said Greek Finance Minister Evangelos Venizelos in Athens. "It is maybe the most important (deal) in Greece's post-war history."
While the deal provides time for the euro zone to put new crisis measures in place over the coming months, it means Greece will struggle for years without economic growth.
The austerity measures imposed on Athens are widely disliked among the population and will put pressure on politicians who must contest an election expected in April.
Further street unrest could test politicians' commitment to cuts in wages, pensions and jobs. Greece's two biggest labor unions called a protest in Athens on Wednesday.
An opinion poll taken just before the Brussels deal showed that support for the two mainstream parties backing the rescue had fallen to an all-time low while leftist, anti-bailout parties showed gains.
Anastasis Chrisopoulos, a 31-year-old Athens taxi driver, saw no reason to cheer the deal.
"So what?" he asked. "Things will only get worse. We have reached a point where we're trying to figure out how to survive just the next day, let alone the next 10 days, the next month, the next year."
Conservative leader Antonis Samaras, a strong contender to become next prime minister, said the rescue package's debt-reduction targets could only be met with economic growth.
"Without the rebound and growth of the economy ... not even the immediate fiscal targets can be met, nor can the debt become sustainable in the long-term," he said during a visit to Cyprus.
Parliaments in three countries that have been most critical of bailouts - Germany, the Netherlands and Finland - must now approve the package. German Finance Minister Wolfgang Schaeuble, who caused an outcry by suggesting that Greece was a "bottomless pit," said he was confident it would be passed.
STUCK IN TRAGEDY
Many economists question whether Greece can pay off even a reduced debt burden, suggesting the deal may only delay a deeper default by a few months.

"I don't think we should consider that they are cleared of any problems, but I do think we've reduced the Greek problem to just a Greek problem. It is no longer a threat to the recovery in all of Europe, and it is another step forward."
Jennifer McKeown, senior European economist at Capital Economics, said: "The austerity measures it will have to implement and increased monitoring by the troika amidst public outrage will make things harder and drive it deeper into recession. There is a risk of a euro zone exit later this year."
A return to economic growth in Greece could take as much as a decade, a prospect that brought thousands onto the streets of Athens to protest on Sunday. The cuts will deepen a recession already in its fifth year, hurting government revenues.
"We sowed the wind, now we reap the whirlwind," said Vassilis Korkidis, head of the Greek Commerce Confederation. "The new bailout is selling us time and hope at a very high price, while it doggedly continues to impose harsh austerity measures that keep us in a long and deep recession."
EXTRA RELIEF
A report prepared by experts from the European Union, European Central Bank and International Monetary Fund said Greece would need extra relief to cut its debts near to the official debt target given the worsening state of its economy.
If Athens did not follow through on economic reforms and savings to make its economy more competitive, its debt could hit 160 percent by 2020, said the report.
"Given the risks, the Greek program may thus remain accident-prone, with questions about sustainability hanging over it," the nine-page confidential report said.
The beefed-up monitoring of implementation of the reforms could bolster accusations among some Greeks of interference in domestic affairs but some critics say that is essential.
Dutch Finance Minister Jan Kees de Jager, one of Athens' most strident critics, told Dutch news agency ANP he had bargained hard for the permanent monitoring mission.
"This program is not something to cheer about," he said.
BOND SWAP
The accord will enable Athens to launch a bond swap with private investors to help put it on a more stable financial footing and keep it inside the euro zone.
About 100 billion euros of debt will be written off as banks and insurers swap bonds they hold for longer-dated securities that pay a lower coupon.
Private sector holders of Greek debt will take losses of 53.5 percent on the nominal value of their bonds. They had agreed to a 50 percent nominal writedown, which equated to around a 70 percent loss on the net present value of the debt.
Juncker said he expected a high participation rate in the deal, a view echoed by the German banking association.
Greece said it would legislate to allow it to enforce losses on bondholders who do not take part voluntarily.
Euro zone central banks will also play their part.
A Eurogroup statement said the ECB would pass up profits it made from buying Greek bonds over the past two years to national central banks for their governments to pass on to Athens "to further improve the sustainability of Greece's public debt."
The ECB has spent about 38 billion euros on Greek government debt with a face value of about 50 billion euros.
The private creditor bond exchange is expected to launch on March 8 and complete three days later, Athens said on Saturday. That means a 14.5-billion-euro bond repayment due on March 20 would be restructured, allowing Greece to avoid default.
The vast majority of the funds in the program will be used to finance the bond swap and ensure Greece's banking system remains stable; some 30 billion euros will go to "sweeteners" to get the private sector to sign up to the swap, 23 billion will go to recapitalize Greek banks.
A further 35 billion or so will allow Greece to finance the buying back of the bonds. Next to nothing will go directly to help the Greek economy.
(Additional reporting by Luke Baker, Julien Toyer, Robin Emmott in Brussels, Daniel Flynn in Paris, Terri Kinnunen in Helsinki, Sarah Marsh in Berlin, Harry Papachristou and George Georgiopoulos in Athens, and Michele Kambas in Nicosia; Writing by Giles Elgood; Editing by Pau
Posted by MrGarabaldi at 10:48 PM