25 years ago "Tear down this wall" 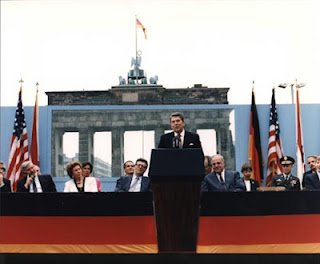 Twenty Five years ago, Ronald Reagan said six little words that would change the world: “Mr. Gorbachev, tear down this wall!”  They were spoken by a man with great respect for freedom and liberty and belief that America could lead the world to a time of peace without the threat of nuclear annihilation from Soviet Russia.

Twenty-five years ago today, President Ronald Reagan stood in West Berlin on a temporarily erected platform. The gray buildings of Soviet-dominated East Berlin were visible through the Brandenburg Gate behind the podium.
Standing inches away from the tangible manifestation of the Iron Curtain, Reagan faced the crowd of West Berliners in front of him and the Western world beyond. But his real audience was behind him, behind the curtain: He spoke to the millions of people in Central and Eastern Europe held captive by the wall, and he spoke to the Kremlin, addressing Soviet General Secretary Mikhail Gorbachev himself.
In his rhetorically masterful speech, Reagan made the economic case for freedom and the security case for Western resolve, but his main argument was a moral one. He stated flatly the problem of U.S.–Soviet relations: “Our differences,” Reagan said, “are about liberty.”
It was his spiritual case for freedom (“This wall will fall, for it cannot withstand faith; it cannot withstand truth. The wall cannot withstand freedom”) that carried Reagan’s appeal to theSoviet Union. Without that moral force, his stringent demand to tear down the wall would have sounded odd and hollow. Indeed, his demands of Gorbachev did sound odd and even downright dangerous to many U.S. foreign policy experts in the State Department and Reagan’s own White House. Several times prior to delivery, experts and staff had attempted to cut out or water down these now immortal lines:

At these words, the crowd exploded into cheers. They were not idealizing the persona of Reagan. They longed for freedom. They aspired to the idea and model of liberty that Reagan’s America represented.
Winston Churchill had first recognized the Soviet’s menacing consolidation and control of territory following World War II and coined the phrase “Iron Curtain” to describe how Moscow had cutoff half of Europe from the West. With similar foresight, Reagan recognized the Iron Curtain’s impermanence.
In this, Reagan was squarely at odds with the best foreign policy minds to be had in America, but the experts were wrong. Two years later, the wall came down; the Soviet Union dissolved.
Reagan’s speech at the Brandenburg Gate is a testament to the truth that bold and hopeful words are worth very little without great actions behind them. In essence, Reagan’s explicit challenge to Gorbachev was the culmination of six years of Reagan’s foreign policy strategy, which was guided by his realization that America’s material and moral interests were at stake.
Reagan worked to bring all aspects of American statecraft to bear on the ultimate goal of defeating the ideology of communism and the menacing state apparatus that subjugated whole nations in its cause. In all of this, Reagan tapped into a noble tradition of U.S. foreign policy and sought to reestablish America’s proper role in the world.

Posted by MrGarabaldi at 4:08 PM