I hope this is a referendum for November.  I remember when Senator Scott won in MASS, it was a portend of the 2010 elections.  I am hopeful that this is a prelude for the bloodbath in November for the Democrats.

By Rachel Rose Hartman | The Ticket – 2 hrs 5 mins ago 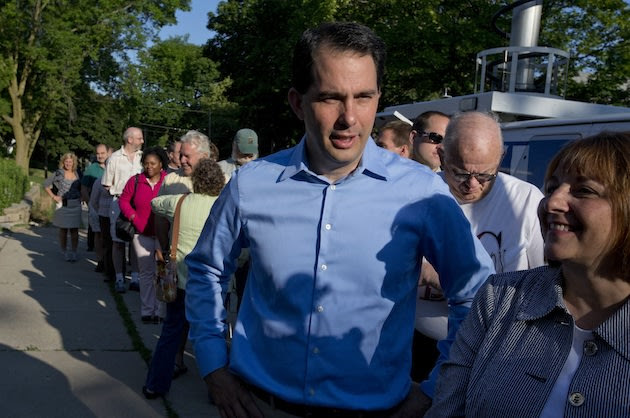 Walker (Morry Gash/AP)
Wisconsin Gov. Scott Walker retained his governorship Tuesday night, besting Democrat Tom Barrett in a race that was a referendum on Walker's decision to take on public employee unions.
Walker led Barrett, who was the governor's 2010 opponent and is the current mayor of Milwaukee, 61 to 39 percent with 25 percent of precincts reporting.

A Walker win is a huge coup for the tea party movement, which rallied tea partyers across the country, as well as for fiscal conservatives and reform-minded Republicans.
Walker was targeted last year for a recall by state and national labor groups, progressives, students and others who viewed his decision to push for an end to collective bargaining by state public employee unions as an attack on middle class America.
"Tonight, Wisconsin voters rewarded political courage," Republican Governors Association Chairman Bob McDonnell said in a statement. McDonnell highlighted Walker's efforts as an attack on the "status quo" and against "unsustainable entitlements and long-term fiscal liabilities" and hailed the governor's actions to close the state deficit, reduce property taxes and improve schools. "His actions have made Wisconsin stronger today, and tomorrow. And they have improved the lives of the citizens of Wisconsin."
Walker's efforts in Wisconsin drew support from the tea party, fiscal conservatives and many prominent Republicans across the country who personally and financially supported the governor in his recall race. Walker raised more than $30 million for the recall, according to estimates, compared to $4 million raised by Barrett, and Walker had several heavy-hitting outside groups in his corner, including the billionaire Koch brothers, who head up a nonprofit called Americans for Prosperity.
While Walker received public support from figures such as Mitt Romney, New Jersey Gov. Chris Christie and House Budget Chairman Paul Ryan, Democrats did not flock to Barrett's campaign.
Though Bill Clinton did campaign for Barrett, Barack Obama did not--a decision Republicans pointed to as evidence of Barrett's weak standing. The president's campaign this week offered last-minute get-out-the-vote messages for Barrett via Twitter and via a campaign video, though it did not feature the president.
The win by Walker will be viewed as a significant blow to big labor, which has been fighting stories of the movement's demise. Polls, campaign finance figures and anecdotal evidence consistently showed Republicans winning an advantage in terms of voter enthusiasm and energy.
Posted by MrGarabaldi at 11:10 PM