The American president is supposed to be ramrod tall and proud to walk and be an American,  he represents the best of us especially overseas.  We are Americans we bow to no one.  We have done more for the world than anyone.  We are the beacon of freedom in the world we show what people can do when they believe in themselves.   Now we elected this hack who started his presidency on the great American apology tour...Really?   He wants to reset the relations with the  Soviets Russians, we have seen how that works....Russia will not abandon an ally, Syria despite having their internal problems.  Well we under Obungler threw Egypt under the bus,abandoned a staunch ally now Israel and the United Stated will have to deal with the fact that the Muslim Brotherhood is in control of Egypt.  Israel is basically alone because of the Obungler effect I am sure that they have doubts about the support of their most staunch ally the United States.  Something the Taiwanese are figuring out also.  This is what happens when you elect amateurs to the white house. 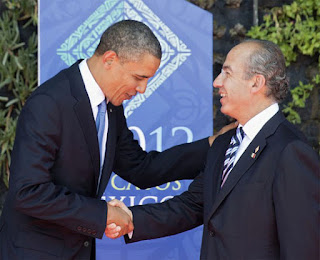 this from weasel zippers

Mexican President Felipe Calderon(R) welcomes US President Barack Obama prior to the opening of the G20 Leaders Summit in Los Cabos, Baja California, Mexico on June 18, 2012. World leaders struggled Monday to inject confidence into the global economy at a G20 summit in Mexico dominated by a spiraling European debt crisis that is spooking markets and paralysing growth. (AFP PHOTO / PAUL J. RICHARDS)