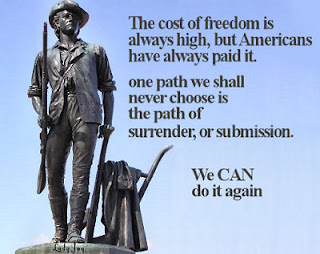 Remember the series, "Why we fight," put out in WW2 to remind the Homefront that we were "ALL-IN" on this one? It appears that many Americans need a reminder that the Constitution IS NOT a suicide pact and that North Dakota's recent act to try and ban ALL property taxes was the right thing to do.  After all, is it MY property? If so, WHY is the government taxing it? If it is MY property, then how can the State take it if I miss paying the "rent" on it? Property tax is a scam foisted on Americans by corrupt State and Local governments.
"Government is not reason, it is not eloquence, it is force; like fire, a useful servant and a fearsome master." George Washington
John Locke's theory of government was the basis for going to war with Great Britain in that citizens willingly give up a portion of their freedom in order to form a government that can carry out the things that an individual cannot do for themselves, i.e., repel an invasion, form trade with another country, law enforcement on a grand scale, form a standing army and navy, etc. In return for granting this power from the people to the government, the government is then obligated to act in a manner that benefits the society as a whole. For example, the government ensures that America is a stable country and not likely to be invaded and this benefits the whole of society but there will be those who succeed and those who fail and it is not the job of government to pick the winners or losers therein. In other words, the government serves the people by giving them a place to exercise their rights and not the other way around. Thus when King George III violated the "contract", the revolution was on.
Now today, we have a totalitarian federal government in place that seeks to ban whatever they disapprove (oil drilling in various states) of AND they pick the winners and losers, i.e., GM, Solyndra, and in doing such, have voided contracts with, say, the bondholders of GM who were bilked out of their investments by Obama and the Federal Government, who had NO BUSINESS interfering therein and then turning right around and giving taxpayer funds to Solydra, who then donated it back to the Obama campaign, and then called for bankruptcy. The problem here is that petty tyrants and tax and spenders like the corrupt and criminal Congcritter Conyers think, as he put it, "that the government is empowered to do anything it deems necessary or useful under the "good and plenty" clause."
If Memory served....there ain't no such clause in the Constitution...

Why we fight back is that the tyrants are "inside the wire" and we can no longer rely on the Fourth Estate to expose the menace because they are PART of the menace. There is a reason that guns and ammo have been flying off of the shelves since 2008 and it is partly because Obama is a gun-grabbing, Operation Fast and Furious knowing, Sarah Brady loving, son of a bitch but moreover, because Americans KNOW and FEEL that our heritage is LIBERTY and FREEDOM, that OUR RIGHTS that were bequeathed to us by our Founders and every man/woman who donned a uniform are under attack. Furthermore, that LIBERTY AND FREEDOM are our BIRTHRIGHT so long as the Stars and Stripes flies over the Republic and there remains one patriot who holds up a musket and yells towards their oppressor, "I WILL NOT COMPLY!"
The Declaration of Independence turned the world upside down in that Jefferson declared that individuals are sovereign and moreover, they are supreme to the government, which is subordinate to the citizens of the nation. Indeed, the Federal Government is subordinate to the individual states according to the Tenth Amendment, yet 100% of the Democrat party and about 50% of the GOP have probably never read it. We are endowed with certain fundamental and inalienable rights granted by our Creator, not from Lord Barry or Cass Sunstein (Regulatory Czar) or any other government bureaucrat! Our rights exist independently of government and not because of government and this aggravates anti-freedom clowns like Obama. Government exists to protect the FREE exercise of these rights against the dregs of society (criminals) or invaders who would then run roughshod over the people's Right to LIFE, LIBERTY, and the PURSUIT of HAPPINESS!
People bitch about Mayor Bloomberg banning salt, transfat, cigs, 32oz sodas but on the local scale, HE CAN! He is a flaming asshole and an idiot but IF the people don't like it, they are free to LEAVE New York and New York City, which they have by the millions (unfortunately taking their stupid liberal ideas with them and polluting other states but that is for another essay). THAT is the great experiment the Founders wanted! California sucks because they tax the hell out of you AND tell you that YOU cannot smoke in your own house...? LEAVE for a better state. But what happens when the Federal Government usurps their duty to protect the free exercise of our rights and becomes a tyrant? Then it is clear that, "whenever any form of government becomes destructive of these ends, it is the right of the people to alter or abolish it, and to institute new government, laying its foundation on such principles and organizing its powers in such form, as to them shall seem most likely to effect their safety and happiness..." We are thus free to fight back and WE HAVE, at the polls in 2010, in Wisconsin, and the coming landslide against Democrats in November 2012!
Obama condemned the Constitution because, as he put it, it is "a charter of negative liberties" that tells the government what it cannot do, not what it can do! The wannabe dictator misses the ENTIRE POINT that if a certain power is not enumerated in the Constitution, then the government is not permitted to exercise it. Indeed, the Bill of Rights ARE further restrictions on the government, not a grant of our rights! WHY are there armed IRS agents? WHY are there ARMED EPA agents? WHY is the government using drones to spy on Americans going about their lawful business on dairy and cattle ranches? The EPA is an illegal agency and it can be argued that the IRS is as well, since we've only had income tax since fascist dictator Woodrow Wilson and a compliant Democrat Congress/Senate passed the 16th Amendment, some call it illegally ratified. WHY is Congress not acting to cease and desist this nonsense?
This is why the ProgStats (progressive statists) and liberals want to shred and render the DOI, the Constitution, and the Bill of Rights into little strips of paper because THEY EMPOWER US to fight back. For example, Indiana recently passed a law where a homeowner can shoot police UNLAWFULLY entering their domain! F*cking "A" skippy. If the police enter a man's castle with a "no-knock-no warrant" search they deserve to get a belly full of lead. HOWEVER, if they follow the Fourth Amendment and other proscribed laws, then they can LAWFULLY and RIGHTFULLY enter a home. The Fourth Amendment LIMITS the actions of the police and government on the US Citizenry and rightly so. That is why it is SO IMPORTANT that when stopped by the police and they ask to search your car, you tell them NO and to get a warrant IF they have probable cause.
Why we fight is because we know in our hearts and by historic examples that Democracies always decay into a tyranny run by a despot who oppresses the people to remain in power and ALWAYS usurps their God-given right to Freedom and THIS we do not want to pass on to our children and their children. Once again, it must be noted that the Founding Fathers gave us a Republic and NOT a Democracy, as the Left always tries to say we are. If Americans fought back and demanded a repeal of the 16th and 17th Amendments, we would be well on the way to returning America to a strong Republic we used to be. It puts power BACK into the hands of the people and the sovereign States where it belongs and WEAKENS the Federal colossus.
"We have no government armed with power capable of contending with human passions unbridled by morality and religion... Our Constitution was made only for a moral and religious people. It is wholly inadequate to the government of any other." John Adams
"God, Guts, and Guns made America free. Let's keep all three." Bumpersticker in the 70's

Posted by MrGarabaldi at 6:52 PM