I pulled this off Yahoo News and cut and pasted it.  It has information that I never knew about.  I thought it was ironic that I saw this on Yahoo News. 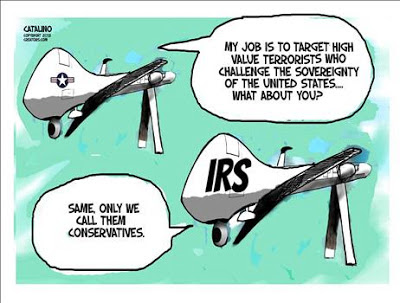 Whatever the motivations for the IRS targeting conservative groups, it has drawn condemnation from across the political spectrum. Liberals also worry the scandal will feed right-wing paranoia of government. But for conservatives, fear of federal agencies is rooted in history, not hysteria.

By Nicole Hemmer | Christian Science Monitor – 5 hrs ago
Last week’s revelation that the Internal Revenue Service targeted conservative groups was met with near universal disapproval. The IRS singled out organizations with words like "tea party" and "patriot" in their name for scrutiny. In the words of Treasury officials, this focus was clearly “inappropriate.”
What’s less clear is whether the IRS’s motivations were partisan or practical. Were they deliberately trying to stifle conservative voices? Or were they simply using a shortcut to weed out new political groups who don’t meet tax-exempt status? Whatever the motivations, the results have drawn condemnation from across the political spectrum. But criticisms from the left have also been tinged with concern about how the episode would bolster the conservative argument against big government.
Many liberals worried the IRS scandal would feed what one Democratic aide called “the right-wing paranoia that the government is out to get them.” MSNBC host Chris Matthews grumbled recently, "They always expect the worst." But for conservatives, fear of federal agencies is rooted in history, not hysteria.

Fifty years ago this month, journalists Donald Janson and Bernard Eismann published “The Far Right,” a catalogue of conservative organizations across America. Raising the alarm about the coming conservative threat was something of a cottage industry in the early 1960s. “The Far Right” would share shelf-space with books like “The Radical Right” and “Danger on the Right.” But what separated “The Far Right” from the rest was its revelation of the Reuther Memorandum.
Commissioned by Attorney General Robert Kennedy and penned by labor leader Victor Reuther, the 24-page memo detailed “possible Administration policies and programs to combat the radical right.”
Reuther defined the “radical right” as “bounded on the left by Senator Goldwater and on the right by [John Birch Society founder] Robert Welch.” And he suggested plenty of ways for the government to curtail the right’s influence, from putting conservatives on the attorney general’s subversive list to using the Federal Communications Commission to limit their airtime.
But the administration’s real power, Reuther argued, lay with the IRS. Conservative media and organizations needed money to function. Therefore, “action to dam up these funds may be the quickest way to turn the tide” against right-wing groups.
He called for revocation of organizations’ tax-exempt status, a tactic similar to the approach which the IRS is currently under fire for possibly employing. Reuther also suggested the IRS investigate corporations that advertised in right-wing media, contending they were peddling propaganda rather than selling products.
Finally, Reuther hinted conservative donors and media personalities should be audited, noting “there is the big question whether [they] are themselves complying with the tax laws.”
While it is unclear whether the memo served as the basis for policy, during the Kennedy administration the IRS cracked down on “ideological organizations” and the FCC targeted conservative broadcasters.

When conservatives learned of the memo’s existence in 1963, they began to see their audits and increased regulation as part of a larger effort to silence right-wing voices. Writing about the memo soon after it was made public, the National Review’s editors remarked, “[I]t is chilling to reflect on the fact that the machinery for intimidation, for discretionary harassment, is right there and in perfect running order.”

That machinery – the federal bureaucracy – was conceived by the Progressives (and the goo-goos, their “good government” predecessors) as a haven from political influence rather than a repository of it. They believed that through civil-service reform they could create government without politics.
But as conservatives (as well as many on the left) have been constantly reminded – in battles over the Fairness Doctrine and tax-exempt status and subversive lists – power is never neutral.
In 1971, well before Americans were aware of the Nixon administration’s weaponized bureaucracy, conservative newspaper publisher Eugene Pulliam ran a lengthy ad in the Washington Post to make just this point.
Pulliam argued America had a three-party system: the Republicans, the Democrats, and the Bureaucrats. And the Bureaucrats, he said, were the “strongest and most powerful” because they are accountable to neither politicians nor public opinion.
Pulliam had a point. There were limits to what Nixon could make the IRS or the FBI do (and it’s hard to imagine a president trying harder than Nixon to make the bureaucracy bend to his will). Nor could the Reuther Memorandum transform the federal government into an efficient conservative-crushing machine. But it made clear that the right couldn’t count on the neutrality of the bureaucracy.
Yet the current IRS scandal demonstrates how far conservatives have come in 50 years. In 1963, the Reuther Memorandum gained traction in conservative media but nowhere else. It barely merited a mention beyond right-wing publications and broadcasts.

Today, the IRS story – whether it turns out the IRS had partisan intentions in discriminating against right-wing groups or not – is at the center of national debate. As it should be. However Americans may disagree about the role of government, the dangers of politicized bureaucracy are not necessarily the fever-dreams of a paranoid mind but appear to be one of the troubling realities of modern governance.
Nicole Hemmer is a research associate at the United States Studies Centre at the University of Sydney. She also teaches history at the University of Miami.
Posted by MrGarabaldi at 12:03 AM