The IRS suppressed the Romney vote

I pulled this off Rush's website.  It pertains to the other posts that I have posted(pardon the pun) in the past week.  I have heard the people from the I.R.S. say " it was low level operatives" that did it.  Well that was crap.  It was sanctioned by the upper staff and management of the agency.  Between the union offering their support and the upper management backing the play, it was open season on the TEA PARTY and other groups.  Really...Do you know a  bureaucrat that would stick their neck out?  Not a chance..being a bureaucrat. they learn to blend in, not make waves...Don't do more than anybody else...Unless it was sanctioned and encouraged.  Let this continue, lets keep digging.  The article is from Rush, The cartoons are from me. 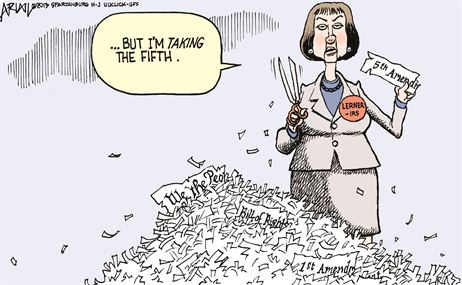 Windows Media
BEGIN TRANSCRIPT
RUSH: If you're just really hankering to write some e-mails to people about your true thoughts of the IRS, this is the day to do it.  They're furloughed.  This is May 24th, the IRS is furloughed today because of the sequester, and then of course Monday is Memorial Day, they're not working.  You might have an entire weekend where you can unload. Plus Lois Lerner, in the, whatever it was, three or four years, it's now scrolled out of my vision, Lois Lerner was paid something like $780,000 over four years, or three years, where she was engaged in all of this activity that was aimed at denying tax-exempt status to Tea Party groups.  Salary and bonus.  She was earning more than members of Congress.  She was earning more than some senators, some committee chairmen.
And now she's been placed on administrative leave.  Do you know what that means?  Paid vacation.  Not paid leave.  Paid vacation.  Lois Lerner.  So the IRS, it's the first day of the Memorial Day weekend, and everything's pretty much changed its vibe.  There isn't a whole lot of going on.  Everybody psychologically, mentally, already is engaged in the long weekend.  Look, Lois Lerner from 2009 to 2012 earned about $780,000.  That was for a job well done.  Paid more than $740,000 between 2009 and 2012, which is the period that the IRS was targeting the Tea Party.  Her salary, therefore, averaged more than $185,000 a year, which is higher than congressmen and senators.  On top of that, she received more than $42,000 in bonuses.

But if she helped Obama get reelected -- two days ago, three days ago, folks, I spent a lot of time -- by the way, I've now seen this reported in a number of places, and again, it's cutting edge stuff.  We've been talking for the longest time about the phenomena of the 2012 election.  Obama got millions fewer votes in 2012 than he did in '08, but so did Romney get many million fewer votes than did McCain.  And up until this IRS scandal hit, the analysis of Romney's low vote turnout centered on white voters.  There were supposedly four million white voters who just didn't show up.  And then people began to offer their theories, me included, as to why, based on that statistic.
And you remember the theories; they ran the gamut.  Well, a lot of these people were conservative and didn't like Romney, he wasn't conservative enough, and so they sat it out.  Another explanation was these people, they're the backbones of the country. They're the ones getting up and going to work every day. They're the ones losing their jobs. They're the ones that are trying hard to improve, play by the rules, and nobody's paying attention to them.  Everybody's focused on the illegals. Everybody's focused on gay marriage. Everybody's focused all these other things, "to hell with it," and they just stayed home.
Now we know it may have been all that, but there was also vote suppression. That's what this IRS scandal is, folks, voter suppression.  This election, the 2012 election honestly deserves an asterisk next to it.  Lois Lerner and the IRS made sure -- oh, and here's another thing.  It is still going on.  Don't think that it's ended.  Let's say you're a Tea Party group and you're applying for tax-exempt status.  You don't have to be denied in order to be discriminated against.  What if your application has been in for years and it's still open and you just haven't heard?  It's the equivalent of being denied.  You still can't get into action, you can't get you can't get into gear.
So this partisan attack on Tea Party and other conservative groups concerning tax-exempt status is still going on.  There are groups who have applications in, and they're just languishing, no action has been taken.  So the IRS doesn't have to flat-out deny you your status.  They can just delay the approval.  So you're sitting out there in limbo.  And that is continuing to happen.  And the upshot of it is that a lot of Tea Party money was never raised, and therefore was never spent on this campaign.  A lot of Tea Party enthusiasm was tamped down.  A lot of religious Tea Party groups never got into gear. They were never authorized to. They were never authorized to start.  They needed to be able to fund-raise in a tax-exempt way in order to get starts and they weren't.
There is no question about it now.  That's what this is all about.  There was a flat-out effort to suppress the conservative vote in this election while everybody was listening to the allegation that conservatives wanted to suppress the black vote or the gay vote, all the attention focused on photo ID, to be able to vote.  The Democrats, "That's racism. That's an effort to suppress the black vote."  You remember all during that campaign the Democrats worried about Republican vote fraud and suppressing the vote.  Well, where it really happened was the government, the IRS, another political arm of the Obama regime literally suppressing conservative voting, fundraising, and turnout.

You know, even I end up taking too much at face value.  The reason that I thought all of the pre-election polling in 2012 was wrong was 'cause they were using '08 turnout for their models.  And I was sitting here telling you, all frustrated, "What about 2010?  Does nobody remember the 2010 midterms?"  The 2010 midterms, the Democrat Party got smoked, and it was the Tea Party that did it.  The Democrat Party got smoked all the way down to local elections, where they got beat.  I think the Democrats lost close to 700 seats nationwide, including the Republicans taking back the House.  It was of a huge turnaround in 2010.  It was massive.  And I just naturally concluded that that turnout would show up again in 2012 because what was it that inspired that turnout?
Obamacare.  And the stimulus.  And every other assault that Obama had made on this economy in this country.  Nothing had changed.  It had only gotten worse.  And I kept looking at these pre-election polls which show Obama winning by five or six, said this doesn't make sense to me.  The election happens, I look at the exit polling data: "55% still blame Bush for the economy." When I saw that, I knew it was over. Five o'clock exit poll, I knew it.  And then the other question that sealed it for me was: "Cares about people like me."  That one broke out 81 to 19 for Obama.  And that was the five o'clock exit poll.  It's over.  The whole night then, everybody kept waiting for Ohio as the last chance.
So the election's over, we're analyzing it, talking about this, "What happened to the 2010 turnout?"  Now we know, folks, now we know.  The Democrats did take note of what happened to 'em in 2010.  They did take note of what the Tea Party did, and by God, they made sure they weren't gonna be able to do it in 2012, and they did.  And those pre-election polls that were using a 2008 turnout for their modeling.  And you remember we would marvel here at the samples that would have Democrats plus 11 and plus eight, and they were basing that on what happened in 2008, and nothing changing in 2012.  So what about 2010?  I said, "Now, 2010, especially, there wasn't even a Republican on the ballot."

There wasn't a Republican issue on the ballot.  There wasn't a single thing on the ballot that would unite and inspire Republicans.  What that 2010 turnout was about was stopping Obama.  I thought, "Well, those people are gonna show up again."  And then we were told "Nope, Romney made 'em stay home."  That never made sense to me.  I'm sorry, it just never made sense to me.  I never understood intellectually how people who were so opposed to Obama in 2010 because of what was happening to the country could, in two years, end up having more dislike for Romney.
That just didn't fit.  But we didn't know then what we know now.  We had to accept that explanation, and I'm feeling like an idiot here for doing so.  'Cause now we know there was utter -- there's no other way to describe this.  It was pure, utter voter suppression.  That's what the IRS was doing.  It was no different than what the New Black Panther Party did at places in Philadelphia.  There was voter intimidation there at those polling places.  So this is really serious stuff.  And it's not getting traction really beyond the political class.  Not yet, be honest about it, low-information voters, the polling data anyway says they don't care, who knows.  But I'll tell you, I never forget that Thomas Edsall piece.  I quoted this over and over, New York Times column.  It was in November of 2011, which they admitted that Obama was gonna abandon the white working class vote and try to suppress it.
That's what the purpose that column was.  They came out and said what they were going to do.  They were going to try to depress and dispirit the conservative vote while giving up on the white middle class vote.  They were gonna give up on getting the vote, but they were gonna do what they could to make sure they didn't show up, and they did.  It was just another form of election fraud.  Now, in hindsight, nothing you can do about it, other than learn from it in the future, but it really is maddening. 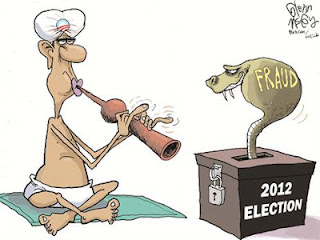