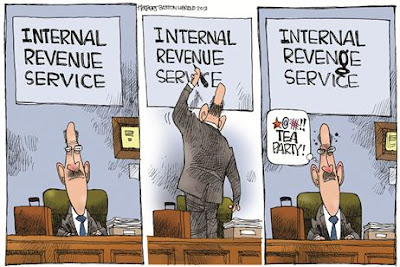 So, here we have the IRS leaking information to the media. Confidential tax data that found its way to Romney's opponents and into the hands of Harry Reid "The word’s out that he hasn’t paid any taxes for 10 years. Let him prove that he has paid taxes, because he hasn’t." Reid on the Senate floor, August 2012. Let us not forget that in 2010, Obama's economic adviser  Goolsbee stated to reporters that Koch Industries did not pay any corporate taxes! This, of course, is not public information and Obama trotted out Baghdad Bob to lie that Goolsbee misspoke. Good God folks, the US Treasury Department was in on it, the Department of Justice was in on it, the White House was in on it, the Department of Labor was in on this, funneling applications from TEA Party folks into the crapper. God only knows who else was involved and what offices THEY are from.
How many voters were swayed by this leaking confidential information, thinking Romney was some rich guy in the 1% while ignoring the fact that not only is Obungler in the 1%, HE IS BACKED BY THE .01%, i.e., Soros, Bloomberg, Spielberg, Hanks, and the rest of the Hollywood Limo Libs! How many American Conservative voters were disenfranchised by the tyranny of the White House and Obama's minions? How many Conservative activists were denied their right to work for the candidate of their choice and who ended up staying home instead of being out rallying the base? How many Tea Party participants were tyrannized into silence by being targeted for audits by the Infernal Revenge Service?
There can be no doubt that election 2012 was gamed and rigged by the community organizer and his Alinskities Axelrod, Jarrett, and the rest of the Chicago gang and since it was "mission accomplished," they got their reward by fat bonuses and went back richer to liberal sewers like Harvard.
FACTS TO PONDER:
1.   The IRS targeted over 500 conservative groups going back through TWO election cycles by illegally obtaining information on donors, volunteers, members, speakers, and anyone else connected.
2.   The IRS, with help of other agencies, gathered all social media, emails, phonecalls, and other media, for use by the Obama Cartel.
3.  The IRS targeted pro-life groups which denied them their First Amendment right to protest abortion clinics or other "democrat" interests.
4.  The IRS targeted Christian Ministries who spoke out against the Left, including Billy Graham.
5.  The IRS targeted Conservative Jewish groups who were pro-Israel.
6.  The IRS illegally provided confidential tax infomration to ProPublica, a left-wing organization who then disseminated the information to other groups.
7. The IRS also illegally released the confidential donor lists and other data on Romney donors.
8. The Obama campaign outed the top eight Romney donors and they were then audited.
9.  The chief of the IRS division,Lois Lerner, blamed two "rogue" agents yet her name appears on MANY letters sent to the Tea Party groups and not just out of Cincinnati but also California and the District of Corruption.
10.  NOW, four agents from the Ohio office have said that they were just following orders. (HINT: That did not work in Nuremberg.)"Dienst ist Dienst..."
There can no longer be any doubt that Election 2008 and Election 2012 were as rigged at Election 1960, oddly enough which hinged on...Chicago... 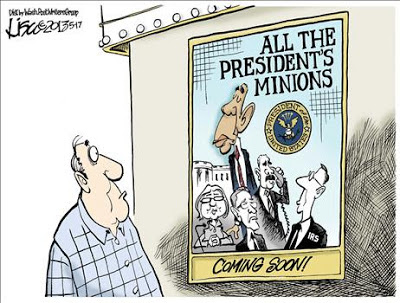