I am putting this on the scheduler so I can get a couple in the cloud so if I am running late, it will automatically post.  I remembered this song on MTV, and I really liked it, It told a story and the video followed the song.  I would make parallels between the Western Nations and the Soviet Block with this video.   I remembered seeing the strange leather hats that the dancers wore and it wasn't until I went to Germany then to Holland and went Window Shopping that I saw the hats and remembered the strange hats from the video.   Funny what one recalls. 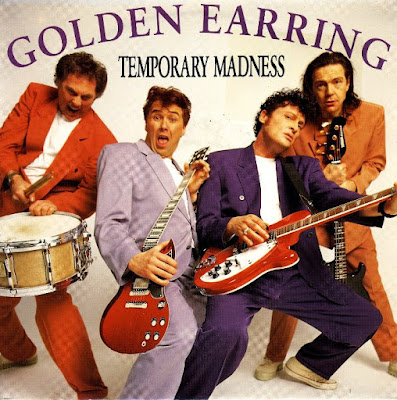 "Twilight Zone" is a 1982 hit by the Dutch band Golden Earring. It was written by the band's guitarist George Kooymans, who got the inspiration from a book by Robert Ludlum, The Bourne Identity. "Twilight Zone" appears on their 1982 album Cut and pays tribute to the 1960s television series The Twilight Zone. It was the group's sole Top 10 Pop single on the US Billboard Hot 100 and hit No. 1 on the Billboard Top Album Tracks chart, the band's only No. 1 hit in America.
The spoken lines in the introduction and first verse (ending with "the gun is still warm") and the backing vocals in the chorus are performed by Barry Hay. Hay also sings lead on the second half of the verses. Kooyams sings the lead for the first half of the verses and the lead in the chorus.

The music video, directed by Dick Maas, features a storyline with lead singer Barry Hay as an espionage agent who is apprehended by three henchmen (played by the other members of the band).
The music video was one of the first to feature a cinematic storyline and dance choreography and was a hit on the fledgeling MTV network, helping the song to become the second international hit for the band. Golden Earring followed the success with an extensive tour of the USA, Canada and Europe. MTV commissioned the band to shoot a movie of the final 'homecoming' concert of the tour in the Netherlands. The concert film, also directed by Dick Maas, included a brief introductory segment which was an extension of the Twilight Zone video. The concert was released in 1984 as Live from The Twilight Zone along with an album of the concert titled Something Heavy Going Down : Live From The Twilight Zone, it aired on MTV and was published as video on VHS, Beta and Laserdisc. To date this concert is regarded as one of the best live shows of the band.
The Cut album cover's iconic image of the jack of diamonds playing card being shredded by a bullet is used in the video and represents the life of the rogue agent.