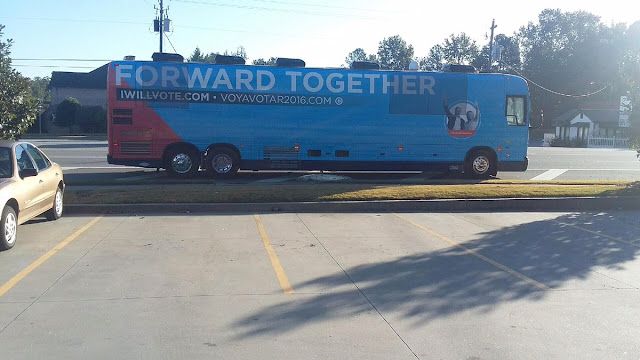 LAWRENCEVILLE, GA (CBS46) - Lawrenceville police are investigating a claim that involves a Democratic National Committee tour bus illegally dumping human waste into a storm drain between campaign stops.
The incident happened on Grayson Highway Tuesday morning after the bus left a campaign stop near the Gwinnett County Board of Elections Office where hundreds of voters were lined up to take part in Early Voting.
Police say when officers arrived on the scene, toilet paper was scattered on the roadway near the storm drain, there was a foul smell.
Mike Robins, manager of a nearby business, took several photos of the tour bus dumping waste into the storm drain. In the pictures, a liquid can be seen coming from the bottom of the bus.
According to Robins, a hazardous materials crew responded to the location and collected the waste to keep more of it from entering the storm drain.
"I don't care who you are. I don't care if you're Hillary Clinton. I don't care if you're Donald Trump. I don't care who you are, you don't throw human waste down a storm drain," said Robins. "Waste water just dumping all out in the street, poured out in the storm drain, and at this time I've got my cell phone out and I'm taking pictures cause I don't care who you are. That's just wrong."
CBS46 reached out to the DNC, which issued the following statement:


This was an honest mistake and we apologize to the Lawrenceville community for any harm we may have caused. We were unaware of any possible violations and have already taken corrective action with the charter bus company to prevent this from happening again. Furthermore, the DNC will work with the Georgia Department of Natural Resources, as well as local and state officials to determine the best course of corrective action.

Now if us "little people" had done that, we would have the EPA on us like a ton of bricks...because we are citizens and not government.   Now if the Government makes a mess....nothing will happen...remember the huge EPA mess, the one that the EPA drilled where they were not supposed to, then broke through, caused a huge spill that polluted 3 states and the Navaho Nation's water.  Yep that one....After a year + of stalling, blowing off the IG and a myriad of other things, the person that caused the spill, noting happened to him.  If it was a company or a person....aw crap, we would be inundated with lawyers and investigators and any environmental group would be having a field day....but they make a mess.....move along.....move along..nothing to see here

And something else I will discuss....

Millennial...you know the people that overwhelmingly supported Bernie and now support Hillary....Yep them.....Apparently there is an article out there that the large percentage of the millennials...support socialism and communism... 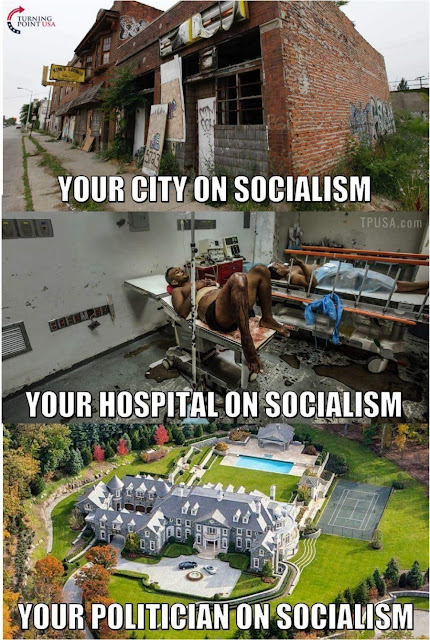 The Victims of Communism Memorial Foundation, citing survey results released on Monday, blames widespread ignorance for the relatively positive views millennials have toward socialism and communism.
Of the 2,300 Americans polled by YouGov, 80% of baby boomers and 91% of the elderly agree with the statement that “communism was and still is a problem” in the world today. Millennials? Only 55%.


‘An emerging generation of Americans has little understanding of the collectivist system and its dark history.’

Furthermore, almost half of Americans between the ages of 16 and 20 said they would vote for a socialist, while 21% would go so far as to back a communist.
Capitalism, on the other hand, is viewed favorably by 64% of those over the age of 65, compared with only 42% of millennials.
In fact, more than half of millennials say the economic system works against them, while four out of 10 call for a “complete change” to ensure that the highest earners pay their fair share.
Read: If socialism is incompatible with markets, how can Nordic stocks perform this well?
There’s a lack of historical perspective, according to the foundation, that the survey showed among a big chunk of the younger generation. For instance, a third of millennials say they believe more people were killed under George W. Bush than Joseph Stalin.
As far as familiarity with historical figures, this chart sums it up:


“One of the concerns [the foundation] has had since its establishment is that an emerging generation of Americans has little understanding of the collectivist system and its dark history,” said Marion Smith, executive director of the organization. “Unfortunately, this report, which we intend to release on an annual basis, confirms this worrisome impression.” 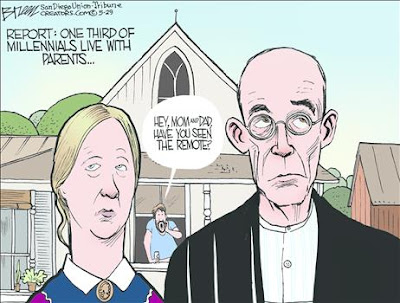 Now I am disturbed, it shows how deep  the rot is in the educational system when people in the ivory towers are able to indoctrinate generations of students on a system that is a failure and their belief is that one day we will get the right people in there and it will finally work.  The problem is that as Margaret Thatcher stated "The problem with socialism is that one day you will run out of other peoples money".
I remembered "Communism" and "Socialism" and what it did, I saw East Germany that had to build a wall to keep people inside so they wouldn't flee to the west for Freedom.  When I was in Berlin in 1987 I saw the lack of hope the crushing of the spirit that communism brings and the only people that seem to get ahead in communism and socialism are the leaders, every one else pays the price. 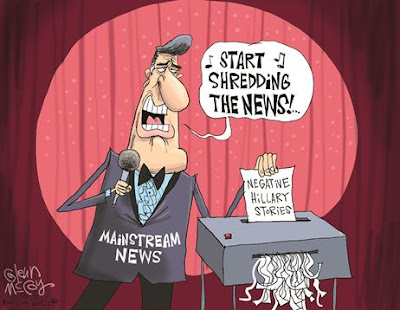 Now back to politics,  A couple of GOP election offices have been vandalized, the one in North Carolina was burned down and a note was spray painted on the wall "NAZI Republicans get out".   And in Delaware, a GOP office had their windows busted down.  Now it is funny that the democrats are always blaming the conservatives for violence but they are the ones causing it from interrupting rally's for Trump to vandalism of vehicles, and many other things...I have never seen the emotions as inflamed as they are now and I blame the media for that, they have as a group overwhelming are in the bag for the democrats.   It is funny that something that is supposed to be protected in the U.S Constitution, the 1st amendment is being used by the statist to suppress the opposing candidate and it is troubling that more people are not aware or flat don't care.  I truly fear for my country and what my son will have to deal with as an adult.

Posted by MrGarabaldi at 8:05 AM