The pic was compliments of Irish, on 2 different days...The rant was something I used on a couple of post on Facebook when I got tired of the self important opinions of people that were dog piling on Trump and giving Cankles a pass.  Perhaps I got unfriended but at this stage I don't care. 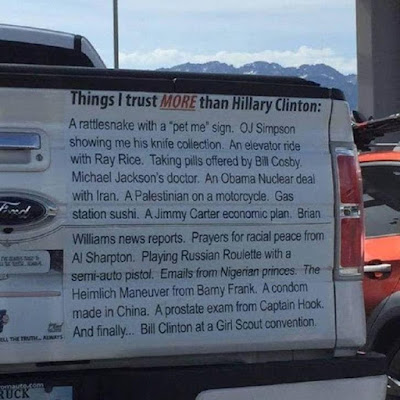 So, Trump used some "locker room language" 11 years ago, in a private, all male group, when he was a private citizen.  Putting it into perspective, it's not like he compromised national security by using an illegal private server while in public office; left 4 men to die in Benghazi; perjured himself before congress; sold arms to ISIS; ran a pay-for-play scheme while in public office; trashed and harassed his spouse's rape victims; defrauded the earthquake victims in Haiti; stole property from the White House; was involved in Chinagate, Filegate, Travelgate, and White Water; was involved in illegal election fundraising; was involved in insider trading of cattle futures; hid and lied about his health while running for POTUS; is associated with the Muslim Brotherhood; and has left a trail of dead bodies behind him.  I ain't a fan of Trump but I even less of a fan of Hillary. 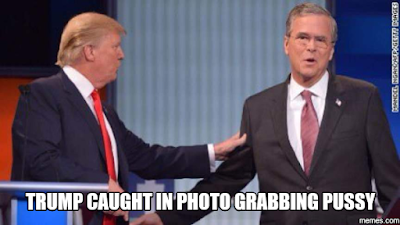 Posted by MrGarabaldi at 4:02 PM