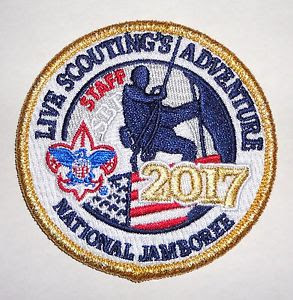 I had to withdraw when there was a discrephancy in my vacation and I didn't have the time like I though I did.  I really wanted to attend.  Oh well, I will try to attend in 2021 and hopefully Donald Trump will be reelected.    Here is the speech that President Trump gave to the National Jamboree.

President Trump on Monday recounted a story about real estate developer William Levitt as he provided advice to Boy Scouts at the organization’s national jamboree.
Speaking to the crowd in West Virginia, Trump described a party he attended where he saw Levitt after the developer had a series of failed business endeavors in the later portion of his life.
“And in the end he failed and he failed badly. Lost all of his money. He went personally bankrupt. And he was now much older.
“And I saw him at a cocktail party and it was very sad because the hottest people in New York were at this party,” Trump explained.
“And I see sitting in the corner, was a little old man who was all by himself. Nobody was talking to him. I immediately recognized that that man was the once great William Levitt of Levittown.”Trump said he went over to Levitt to introduce himself and ask him what happened in his failed business attempts.
“And he said, ‘Donald, I lost my momentum. I lost my momentum.’ A word you never hear when you’re talking about success,” Trump said.
The president used the anecdote as a means to encourage the Boy Scouts, telling the crowd to “never quit, never give up.”
“He lost his momentum, meaning he took this period of time off long, years, and then when he got back, he didn’t have the same momentum,” Trump added about Levitt.
“In life, I always tell this to people. You have to know whether or not you continue to have the momentum. And if you don’t have it that’s OK.”
Posted by MrGarabaldi at 12:00 AM