Today on the way home, I gotten a messenger from the Diva of hotness, my favorite Blog Babe sent me a messenger with these articles attached to it and she had asked my opinion.  The first one was an apology from Boy Scouts of America apologizing for President Trump's speech, the second thing was an opinion piece from a commenter at FoxNews.

Scouting Family,
In the last two weeks, we have celebrated the best of Scouting at our 20th National Jamboree with nearly 40,000 participants, volunteers, staff and visitors. The 2017 National Jamboree has showcased and furthered the Scouting mission by combining adventure and leadership development to give youth life-changing experiences. Scouts from Alaska met Scouts from Alabama; Scouts from New Mexico met those from New York, and American youth met youth from 59 other countries.
Over the course of ten days, Scouts have taken part in adventures, learned new skills, made new and lasting friendships and completed over 200 community service projects that offered 100,000 hours of service to the community by young men and women eager to do the right thing for the right reasons.
These character-building experiences have not diminished in recent days at the jamboree –  Scouts have continued to trade patches, climb rock walls, and share stories about the day’s adventures. But for our Scouting family at home not able to see these real moments of Scouting, we know the past few days have been overshadowed by the remarks offered by the President of the United States.
I want to extend my sincere apologies to those in our Scouting family who were offended by the political rhetoric that was inserted into the jamboree. That was never our intent. The invitation for the sitting U.S. President to visit the National Jamboree is a long-standing tradition that has been extended to the leader of our nation that has had a Jamboree during his term since 1937. It is in no way an endorsement of any person, party or policies. For years, people have called upon us to take a position on political issues, and we have steadfastly remained non-partisan and refused to comment on political matters. We sincerely regret that politics were inserted into the Scouting program.
While we live in a challenging time in a country divided along political lines, the focus of Scouting remains the same today as every day.
Trustworthiness, loyalty, kindness and bravery are just a few of the admirable traits Scouts aspire to develop – in fact, they make up the Scout Oath and Scout Law.
As part of our program’s duty to country, we teach youth to become active citizens, to participate in their government, respect the variety of perspectives and to stand up for individual rights.
Few will argue the importance of teaching values and responsibility to our youth — not only right from wrong, but specific positive values such as fairness, courage, honor and respect for others.
For all of the adventure we provide youth such as hiking, camping and zip-lining, those activities actually serve as proven pathways and opportunities to develop leadership skills and become people of character.
In a time when differences seem to separate our country, we hope the true spirit of Scouting will empower our next generation of leaders to bring people together to do good in the world.
Yours in Scouting,
Mike

The time has come for every red-blooded, God-loving patriot to sever ties with the Boy Scouts of America.
On Thursday the Boy Scouts (and those who identify as Boy Scouts) took it upon themselves to apologize for President Trump’s speech delivered to some 40,000 people at the National Scout Jamboree.
In doing so the leadership of the BSA has brought shame and disgrace upon what was once a storied and revered organization.
“I want to extend my sincere apologies to those in our Scouting family who were offended by the political rhetoric that was inserted into the jamboree. That was never our intent,” BSA Chief Scout Executive Michael Surbaugh wrote.

He went on to say the BSA regrets “that politics were inserted in the Scouting program.”  You can read his entire screed by clicking here.
Who – exactly – was offended by the president’s remarks?
He was greeted with a tremendous welcome – thunderous applause and cheers. Thousands of scouts chanted his name. If there were those who took offense, their numbers were considerably small.
Quite frankly, I contend the only people truly offended by the president’s remarks were liberals, the Mainstream Media, Hollywood starlets and BSA leadership. And I suspect they were more offended that Trump’s name elicited cheers while former President Obama’s name elicited jeers – with great gusto.
Surbaugh went on to write in a lengthy blog posting that the Boy scouts have “steadfastly remained non-partisan and refused to comment on political matters.”
That is a patently false statement.
The adult leadership of the BSA has allowed the organization to become a playground for the gender and sex revolutionaries. In January, the BSA sacrificed its last vestige of integrity on the altar of political correctness by allowing girls who identify as boys to join scout troops.
And where was the BSA leadership when the Mainstream Media compared the president’s speech to a Hitler Nazi Youth speech?
So spare us the righteous indignation, Mr. Surbaugh.
I would urge every parent with a child in the Boy Scouts to consider an alternative scouting organization – Trail Life USA. Trail Life is a faith-based scouting program that stands on a firm foundation.
There was a time when the Boy Scouts of America taught young boys and young men to make moral and ethical decisions. But those days are long gone. 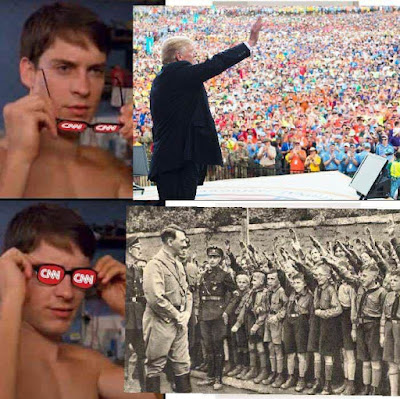 Now I will give my opinion, the Boy Scouts are wrapped in the culture war, the BSA tries to remain non partisan, but the Left views the Boy Scouts as "traditional American values" and like all Marxist, they strive to wipe out the collective history of a people to insert their own values.  The Boy scouts are collateral damage in a culture war that has seen a lot of changes and not all of it good.  The Left has a "Take No Prisoners" attitude and the right tries to "get along" and make compromises to appease the left, but the left is never satisfied.  The goal of the left is to totally remake America in their own twisted image that bore little resemblance to the America that did exist at one time.  If a people don't know their traditions and past, they are easier to manipulate and control and to the left, it all boils down to control.  They know what is best for for the rest of us, and if we would only get with the program the great utopia will arrive.
Now to the letter from the Scout Executive.  He should not have apologized, I am sure that the corporate donors put pressure on him because the left is big on organizing and boycotting and controlling the outrage machine.  Now that they apologized, the left smells blood in the water, now the BSA will have to do something to "atone" for the great sin and deviating from leftist cultural dogma.  Like I said, the Chief Executive should not have apologized, he needs to realize that to the left, there is no "non partisan", if you ain't with their agenda, then you are to be crushed or forced to heel and toe the line.   The Boy Scouts will have to start developing a backbone, if they espouse traditional values than they need to stand by the traditional or timeless values, then they need to develop a spine and realize that they cannot appease the militant left.  Many people put their kids in the Boy Scouts so they learn traditional or timeless values that have stood the test of time.  Values that have been generational are in danger of being wiped out in the name of political correctness and
being eradicated on the alter of cultural Marxism.
Posted by MrGarabaldi at 10:38 PM