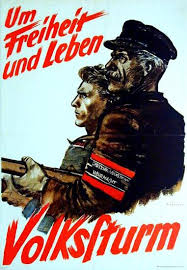 In the summer of 1944, Adolf Hitler’s monstrous dream of an eternal empire began to collapse. Five years after his invasion of Poland had plunged the world into war, his opponents landed in northern France beginning a swift, destructive advance toward Germany. To the south, Allied forces were already clawing their way up Italy, while in the east, the long and bloody struggle of the Russian front had turned around and Soviet forces were advancing.
Hitler’s approach to military strategy had never been grounded in reality. With his life’s work threatened, he took desperate steps to avoid losing the war.
Re-manning the West Wall
The Siegfried Line, also known as the West Wall, was a massive network of defenses on Germany’s border with France. Built between 1936 and 1939, it included concrete bunkers, trenches, and anti-tank barriers. 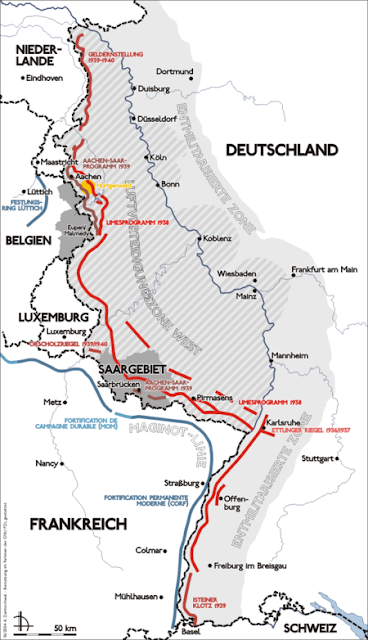 Once Hitler had conquered France, the line became unnecessary as a western defense. Supplies and soldiers were moved out, and the doors were locked.
Four years later, with the Allies coming, things changed. Hitler ordered troops to reoccupy the line. They hurried to replace rusted parts and cut back overgrown ground. Using the West Wall, they held up the Allies for six months around the Franco-German border. However, with Allied forces advancing on every front, a localized defense line was nowhere near enough.
To ensure that the full resources of the Reich went into its defense, Hitler began closing down things he considered unimportant. Theaters and music halls were closed. The only publishers allowed to continue were those publishing school textbooks and Hitler’s Mein Kampf. The only parts of universities that kept going were the medical schools. 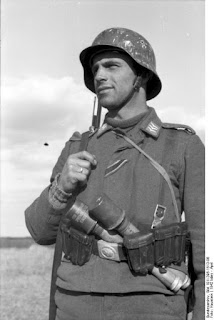 Luftwaffe PFC in a Ground Division
With hundreds of thousands of Allied troops on their doorstep, the Germans needed as many men on the front lines as they could get. One solution was to take them from elsewhere in the military. Pilot training programs were shut down, and ships were mothballed; the war at sea had become irrelevant. Their crews, along with those of the U-boats, were diverted into the infantry.

One of Hitler’s grandest schemes was Operation Herbstnebel or Autumn Fog.
It was to be a powerful counterattack in the west. Pouring out of the forested Ardennes, German troops would punch a hole through the Allied lines, splitting the British and American forces. Like the bold attacks early in the war, it would leave the enemy reeling and give Hitler an edge.
However, it was not the early war. Hitler’s lieutenants tried to talk him out of the attack. They realized they did not have the fuel, weapons, or manpower to succeed against the Anglo-American forces. 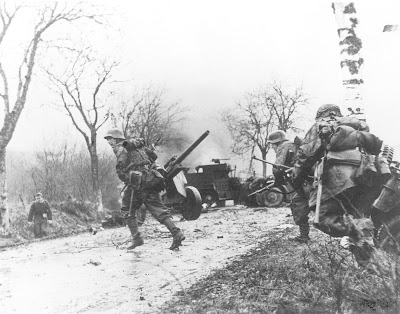 Hitler was not to be dissuaded. On December 16, the attack began. Within days, it ground to a halt, bogged down in the Battle of the Bulge. Hitler had spent an enormous proportion of his reserves and gained very little. Most of it was retaken within a week.
Young Boys and Old Men 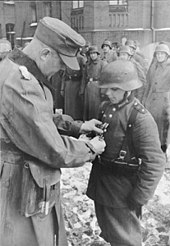 Running out of able-bodied fighting men, Hitler turned whoever was left into soldiers. Ill and injured soldiers were forced into new units. One was the “ear and nose” battalion, in which orders often had to be given in sign language. The old men of the Volkssturm, a force similar to Britain’s Home Guard, were mobilized. Weapons were given to the Hitler Youth.
In Hitler’s view, any German who could fight should fight.
The more desperate things became, the further Hitler sank into a delusion that he could hold onto territory just by ordering it. He refused to allow withdrawals, even tactical ones that might have earned German forces an advantage. Surrenders were a complete anathema. In East Prussia, the Po Valley, Bregenz, and other places across Europe, German soldiers faced a choice between mutiny and a futile death. Soldiers and civilians alike died needlessly in their thousands. 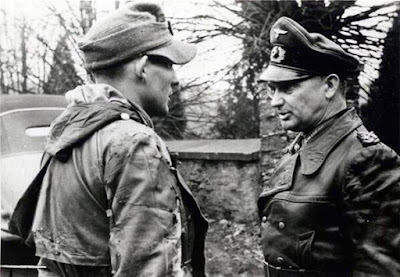 Field Marshall Model (Hitlers Fireman)  He would go from theater to theater and restore the front after a catastrophe, was well respected by the allies, but was suspect under Hitler, Field Marshall Model Committed Suicide surrounded in the Ruhr Pocket, rather than surrender
Hitler was unable to believe that any failure was his fault and so laid the blame on his subordinates. He was also unwilling to accept criticism or disagreement. As the failures mounted and the arguments became more heated, he began firing his most senior commanders. Heinz Guderian, one of the greatest tank commanders of the war, was dismissed for a second time. Heinrich Himmler, Head of the SS, was removed from his post as Commander of Army Group Vistula. Herman Göring lost his place as Hitler’s successor; for what that position was worth.
While the ship sank, Hitler reordered the crew.
Contingency for a Split Reich
As the Allies advanced on all sides, it became likely Germany would be split in two. Desperate as the situation would be for that to happen, Hitler was determined they would keep fighting. He made arrangements for the leadership of a physically divided Reich. If the south were cut off, then Field Marshal Kesselring would take over there and continue the fight.
Kesselring was one of the most capable leaders and managers in the whole German military machine, but even he could not have held out for long.
The Alpine Redoubt
The Alpine Redoubt was an old plan. In the event of failure, the last German forces would fall back into supplied and fortified positions in the mountains, where they could keep the Reich alive.
In April 1945, Hitler gave the order.
However, there was no Alpine Redoubt. Unwilling to accept the possibility of defeat, Hitler had done nothing to set up the factories, supplies, and defenses the redoubt needed. The idea of retreating there was a delusion or a lie.
To the end, Hitler’s plans were less about reality and more about the world he wanted to see. 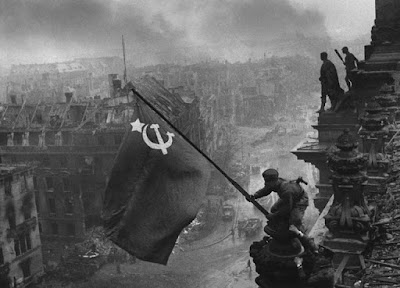