I was on my way home from work and I was listening to my Sirius/XM on the 80's channel and they were doing the playback for the top 40 on this date in 1985(which I consider a good year:).   This song came on and I remember the many comments to the 50's culture.  but I remember a line in the song that is true today as it was back then "The good old days weren't always good./ And tomorrow ain't as bad as it seems."   Be an optimist, the future ain't always gloomy.  Despite the trials and tribulations I see now, I am hopeful that we Americans can pull it together.

"Keeping the Faith" is a song by rock singer-songwriter Billy Joel, released from his 1983 album An Innocent Man. It reached #18 on the main US Billboard Hot 100 chart and #3 on the US Billboard Adult Contemporary chart. The song was the only single from the album that failed to chart on the UK Singles Chart, despite the success of An Innocent Man in the United Kingdom.
"Keeping the Faith" is the last track on and final single from the album and the lyrics sum up Joel's reason for creating the album, which hearkens back to the sounds and style of 1950s and early 1960s pre-British Invasion rock and roll music. 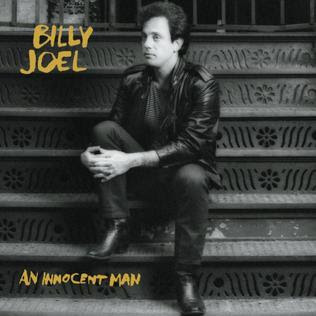 The music video for the song depicts a court trial to determine whether Joel is innocent and is "keeping the faith" (as the song "An Innocent Man" plays in the background.) Richard Pryor makes a cameo appearance at the beginning of the video, standing at the bottom of the courthouse steps, reading a newspaper with the headline "Billy Joel: Guilty or Innocent?". The courtroom audience is populated by 1950s acts on one side, and 1960s acts (including a Jimi Hendrix lookalike) on the other, and shows Joel singing and dancing throughout the video. Joel's wife-to-be Christie Brinkley appears in the video as the "red haired girl in a Chevrolet". At the end, Joe Piscopo makes a cameo, reading a newspaper with the headline "Billy Joel: An Innocent Man!", and he quips to a shoeshine boy, "Keep the faith, kid."
The cover for the single shows an image of Joel and the judge (character actor Richard Shull) in the "jukebox" courtroom from the video.

The song itself is set in the 1980s, with the singer reminiscing about the 1950s' lifestyle. As a result, Joel lists many prominent items of the time, in particular, Lucky Strike cigarettes, chino pants, Sen-Sen mints, Trojan condoms, and Old Spice after shave, as well as many fashion styles common during the time, including matador boots "with the Cuban heel", and the Pompadour hairstyle. At the same time, Joel questions being overly sentimental about the past, singing, "The good old days weren't always good./ And tomorrow ain't as bad as it seems."
Posted by MrGarabaldi at 6:00 AM