I remembered watching a WWII movie in 1977 called "A Bridge Too Far"  I really liked the movie and the sound track was awesome.  I Still hum the soundtrack every once and a while.   I considered a very accurate telling of a battle told in a movie format.  It was neat seeing all these big name movie stars in the movie and I was living in Europe during the time this movie was filmed, I could relate to what I had seen on the screen.  To me this movie was underrated and next to the film "Midway" is one of my favorite WWII movies. 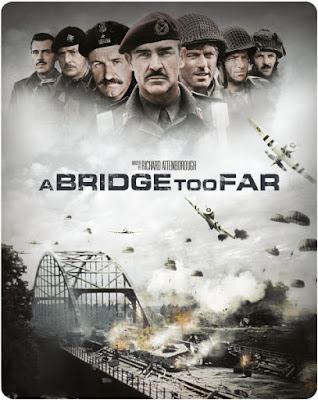 The film tells the story of the failure of Operation Market Garden during World War II. The operation was intended to allow the Allies to break through German lines and seize several bridges in the occupied Netherlands, including one at Arnhem, with the main objective of outflanking German defenses in order to end the war by Christmas of 1944.
The name for the film comes from an unconfirmed comment attributed to British Lieutenant-General Frederick Browning, deputy commander of the First Allied Airborne Army, who told Field Marshal Bernard Montgomery, the operation's architect, before the operation: "I think we may be going a bridge too far", in reference to the intention of seizing the Arnhem bridgehead over the Rhine river.
The ensemble cast includes Dirk Bogarde, James Caan, Michael Caine, Sean Connery, Edward Fox, Elliott Gould, Gene Hackman, Anthony Hopkins, Hardy Krüger, Laurence Olivier, Ryan O'Neal, Robert Redford, Maximilian Schell and Liv Ullmann. The music was scored by John Addison, who had served in the British XXX Corps during Market Garden.

Well the movie made mention of a "Bailey Bridge", and I never knew what it really was..Here is a clip of the bridge mentioned from the Actors "Elliot Gould" and "Michael Caine"


Building the Bailey Bridge over the River Son
This actually showed one being build. 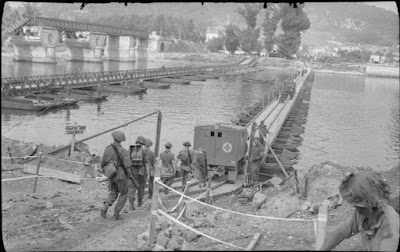 Picture an Allied tank commander in Europe, during Autumn, 1944. Advancing for days, destroying the German resistance. Nothing has been able to stop the invasion; except a blown bridge. Luckily, somewhere back in the supply columns which keep the army going, is a Bailey Bridge.
Donald Bailey, the designer of the Bailey Bridge, was born in Rotherham, in 1901. He received his BA in Engineering from the University of Sheffield in 1923. After graduating, he helped design railway bridges in the 1930s, but by 1940 he was working for the War Department.
In Christchurch, Southern England he and a group of other engineers, comprised MEXE (Military Experimental Establishment). They were designing and testing new engineering equipment for the British Army.

The Army at the time was facing a dilemma. They knew they would be required to fight in Europe, with its various canals, rivers, streams, and lakes. Any one of these could stop an army advancing, and they needed a foolproof way to cross them.
Collapsible and portable bridges had been around for hundreds of years, in various forms. By 1940, however, British weapons were outstripping engineering equipment.
Their tanks weighed more than 40 tons, but the heaviest portable bridge could hold only 26 tons. The Allies would be bogged down and delayed as engineers worked to repair existing bridges or build more permanent ones.

Donald Bailey was being driven back to his headquarters building after a failed bridge test. The world seemed to be collapsing around England, and everything they tried seemed to fail. The War Department was desperate for a reliable bridge. Suddenly, Bailey had an idea. He began sketching it out on the back of an envelope.

It was an amazingly simple design. Prefabricated panels each made up of internal trusses. These were joined by pegs, with large beams running across the bridge’s width. This gave them not only the rigidity needed to span a large area, but they could be assembled with simple tools: sledgehammers, rollers, and wrenches.

Equally important, they were straightforward and cheap to produce. Almost any industrial fabricator could make the panels and pieces necessary, and mass production was a definite possibility. The Bailey Bridge had been born.

In the battlefield these bridges proved indispensable. Field Marshal Montgomery said they were necessary to the speed of the Allied advance during the war. In Italy and Sicily, over 55 miles of bridges were built, spanning everything from stream beds, to the 1,126 ft. Bridge over the Sangro River. The longest, which spanned the Chindwin River in Burma, was 1,154 ft.
After D-day, in France, the low countries, and Germany, Bailey Bridges were consistently used to replace many of the bridges destroyed by the retreating Germans. Famously, the Son bridge was replaced with one during Operation Market Garden, in September 1944; eventually allowing Allied armor to press forward and help seize Nijmegen.

Today Bailey style bridges are a fixture of almost any modern military. The materials have been upgraded, but the basic design, prefabricated, interlocking sections which can be put together a myriad of ways, has not changed.
Their use has expanded to the civilian life, where they are often used for disaster relief and are permanent fixtures in some areas. Bailey might not be the best-known hero from World War 2, but his contribution to the war effort was immense, and his memory, and legacy, can not be forgotten.