First off, my apologies, I inadvertently spent a lot of time at work and were unable to update the blog.  Normally if I am aware of any delays, I will use the scheduler thingie and load some stuff, biut was unable this time to do so.
Those that know me for a long time know that I work in the aviation field, and I work with a bunch of crusty Mechanics and our humor is ribald and politically incorrect as much as the people in HR would wish otherwise.   I had quickly picked up a few things to add to my post. 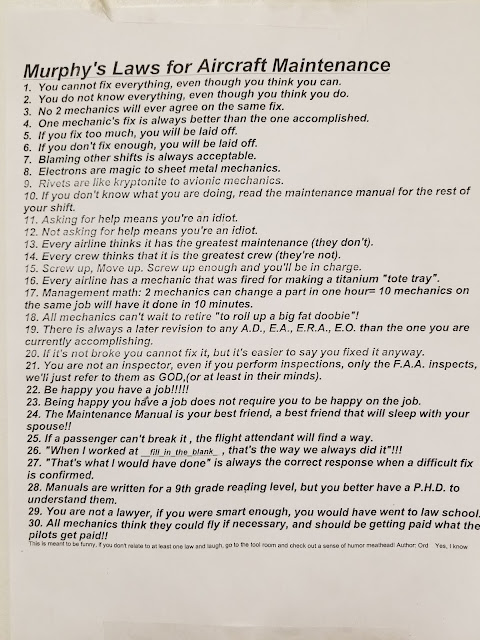 I saw that posted in a leads office and I got a chuckle out of it... 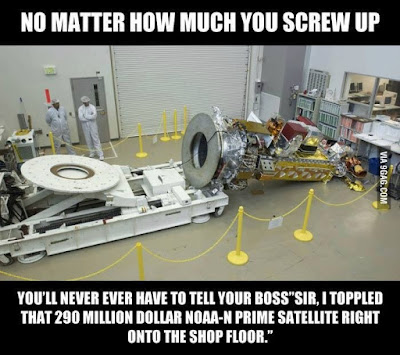 This was on a guys toolbox.....I got a bit of background
Report executive summary
On Saturday, September 6, 2003 during an operation at Lockheed Martin Space Systems Company (LMSSC) Sunnyvale that required repositioning the Television Infrared Observational Satellites (TIROS) National Oceanic and Atmospheric Administration (NOAA) N-Prime satellite from a vertical to a horizontal position, the satellite slipped from the Turn-Over Cart (TOC) and fell to the floor. The satellite sustained heavy damage, although no injuries to personnel occurred. The exact extent of the hardware damage is still being assessed.
The operation scheduled for that day was to shim the Microwave Humidity Sounder (MHS) instrument by removing and replacing the instrument. This operation required the spacecraft to be rotated and tilted to the horizontal position using the TOC. The spacecraft fell to the floor as it reached 13 degrees of tilt while being rotated. The reason was clear from inspection of the hardware: the satellite fell because the TOC adapter plate was not secured to the TOC with the required 24 bolts.
Three days after the mishap, on September 9, 2003, Dr. Ghassem Asrar, NASA Associate Administrator for Earth Science established the NOAA N-PRIME Mishap Investigation Board (MIB) in the public interest to gather information, conduct necessary analyses, and determine the facts of the mishap. To identify the root causes at work in the NOAA N-PRIME Mishap, the MIB undertook two approaches. The first was an extensive analysis of the sequence of events prior to and on the day of the mishap; the planned operational scenario vs. the actual execution; and the planning activities, including scheduling, crew assembly and test documentation preparation. The second approach was to utilize the Human Factors Analysis and Classification System (HFACS) (2000) to provide a comprehensive framework for identifying and analyzing human error. Evidence from a number of sources, including witness interviews, test and handling procedures, and project documents, were used to develop the accident scenarios and populate the HFACS model.
The causes of the NOAA N-PRIME mishap are summarized below. Proximate Cause: The NOAA N-PRIME satellite fell because the LMSSC operations team failed to follow procedures to properly configure the TOC, such that the 24 bolts that were needed to secure the TOC adapter plate to the TOC were not installed.
The root causes are summarized below along the four levels of active or latent failures as ascribed by the HFACS framework.
The TOC adapter plate was not secured to the TOC because the LMSSC operations team failed to execute their satellite handling procedures.
The Responsible Test Engineer (RTE) did not "assure" the turnover cart configuration through physical and visual verification as required by the procedures but rather through an examination of paperwork from a prior operation. Had he followed the procedures, the unbolted TOC adapter plate would have been discovered and the mishap averted. Errors were also made by other team members, who were narrowly focused on their individual tasks and did not notice or consider the state of the hardware or the operation outside of those tasks. The Technician Supervisor even commented that there were empty bolt holes, the rest of the team and the RTE in particular dismissed the comment and did not pursue the issue further. Finally, the lead technician and the Product Assurance (PA) inspector committed violations in signing off the TOC verification procedure step without personally conducting or witnessing the operation. The MIB found such violations were routinely practiced.
You can read the rest of it Here

And finally a bit of wisdom in a placard on a toolbox... 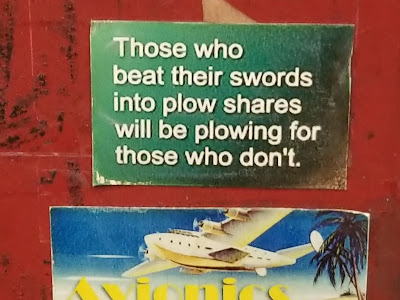 Posted by MrGarabaldi at 8:23 AM

Email ThisBlogThis!Share to TwitterShare to FacebookShare to Pinterest
Labels: humor