I am doing better since my "bout" with the kindneystone, but I was able to continue working.  I will be going to pullapart to get a seat for the F150 and I will be taking the back glass off to re seal the back window because there is a leak, it isn't a bad leak but I want to get it fixed.  I will post in a few days to say how it went.
I heard this song on my Sirius/XM on the way to work and I decided to roll with it.


"Holiday Road" is a 1983 single written and recorded by former Fleetwood Mac guitarist Lindsey Buckingham. The song was written for the 1983 film National Lampoon's Vacation. The song was also used in the sequels National Lampoon's European Vacation, Vegas Vacation, and Vacation. While the song peaked at only No. 82 on the Billboard Hot 100 chart, it has since become one of Buckingham's best known songs. 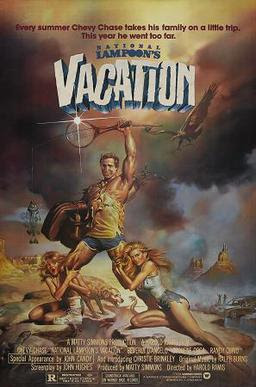 Buckingham released a live version of the song on his 2008 album Live at the Bass Performance Hall.
In July 2015, a remastered edition of "Holiday Road" was re-released on the Vacation soundtrack album and as a digital download along with "Dancin' Across the USA" from the original National Lampoon's Vacation soundtrack.

Posted by MrGarabaldi at 9:32 PM