I decided to roll with this song, I remembered the first time I heard this song at a club in Germany and it was hilarious, I really enjoyed the storytelling.  Granted they call it "Rap" but this was before the "Gangsta rap" took over the urban scenes.  Will Smith has cemented his image as a "clean" image and that image has endured through his movie career.  He is one of the most bankable men in Hollywood, pretty good for a kid that started spinning records.

"Parents Just Don't Understand" is the second single from DJ Jazzy Jeff & The Fresh Prince's second studio album, He's the DJ, I'm the Rapper. The song won a Grammy Award for Best Rap Performance at the 1989 Grammy Awards, one of the two songs to do so before the award was discontinued in 1991. It peaked at #12 on the Billboard Hot 100. The song was released as a single in spring 1988. The song was referenced several times in the television show The Fresh Prince Of Bel-Air. The song was ranked #96 on VH1's 100 Greatest Songs of Hip Hop, and the music video was featured in the 2003 film Malibu's Most Wanted. 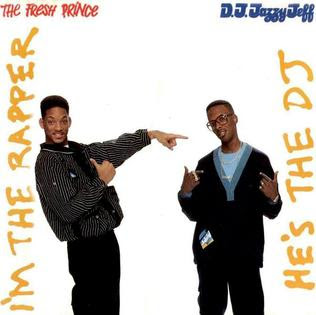 The song's two major verses involve The Fresh Prince's problems with his own parents. The first one is a recollection of when he went school shopping with his whole family at the Gallery Mall, and his mother bought him a whole wardrobe of clothing that was way against his style (getting "Zips" shoes instead of Adidas, bell-bottoms, reversible slacks, etc.) and suffering the inevitable at school the first day. The second verse was of him taking the family Porsche out for a spin while his parents were away, picking up a girl, going to McDonald's, flooring it, getting pulled over for speeding, finding out the girl he picked up was a runaway, getting arrested, then having his parents come home from their vacation to bail him out and severely discipline him on the drive home.