I haven't posted anything from the JPFO in a long time.  I used to post stuff from them when I first started blogging.  I saw this from JPFO.  I have a lot of issues with "Red Flag" laws, it violates due process and some states  and municipalities that are anti-gun use this as an excuse to disarm their citizens. All it takes is someone "hearsay" and they come over and seize your guns and you have to take them to court to try to get your guns back and usually you don't because the system is rigged against you and tilted to the state.

I'm not a fan of red flag laws at all.
On the surface, to be frank, I kind of want to be. I want to find some way to take guns from mass murderers before they do horrible things. On the surface, I really do.
However, the problem is that there's no way to do that without infringing on people's rights. We don't really know who is a mass murderer in the making and who isn't. That means a lot of innocent people are going to be messed with who shouldn't be. Couple that with the whole due process thing, and it's a freaking nightmare.
The problem is that some people don't see that nightmare. They see just the surface, and then they defend the law in print.
The thing is, sometimes, their defense of the law illustrates a lot of the problems with that law. .....

The bottom line is lack of due process - guilty even by heresay, not to mention the extreme risks possible from a dawn no-knock raid when LE 'comes to collect'. Stopping mass murders is one thing, laudable in itself - but deprivation of rights by 'pre-crime' is quite another.

"You don't have to be Jewish to fight by our side."
You just have to love freedom. 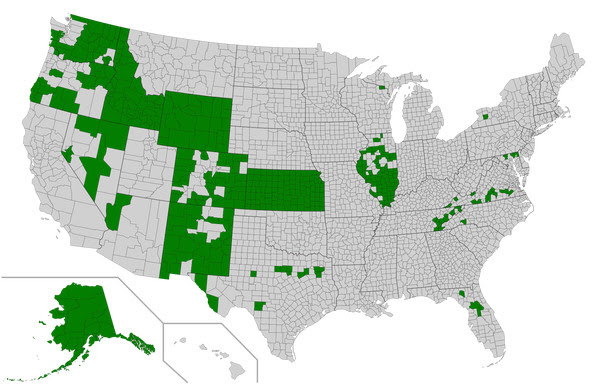 I'm slow, but I eventually put the pieces together. The bad news is that more state governments are infringing on our rights. The good news is that local governments stood up to protect us. We are seeing a large and growing movement across the country where local governments stand up to protect our right of self-defense. We have well established second-amendment sanctuary counties in Colorado, Illinois, New Mexico, and Washington. We're seeing a new bloom of them in other states. The growth is so rapid, that I know the graphic is out of date.
The second-amendment sanctuary movement started years ago. I remember when counties in Colorado said they would not enforce the recently passed magazine capacity limits. There were many downstate counties in Illinois who told the Chicago-controlled legislature that they would 'keep their guns, thank you'. Counties in New York passed second-amendment sanctuary bills after the infamous New York SAFE Act was passed in the middle of the night. .....