It has been a year or two since I have done a "Red Storm Rising" post,. but what prompted this was the spousal unit and I are watching an episode of JAG  and there was a story about a rogue torpedo and it reminded me of the British "SpearFish". it mentioned the speed of the torpedo in excess of 80 MPH's and that will catch a Alfa Class Submarine and the prototype Papa Class  I had just finished reading "Red Storm Rising"  .  What can I say, I like the book.  Tom Clancy was a warrior Bard in my opinion.  But I digress. 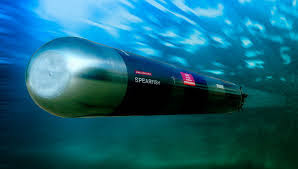 The Spearfish torpedo (formally Naval Staff Target 7525) is the heavy torpedo used by the submarines of the Royal Navy. It can be guided by wire or by autonomous active or passive sonar, and provides both anti-submarine warfare (ASW) and anti-surface ship warfare (ASuW) capability. Spearfish development began in the 1970s, with production starting in 1988, and deployment in 1992. By 2004, they had completely replaced the older Tigerfish torpedo. 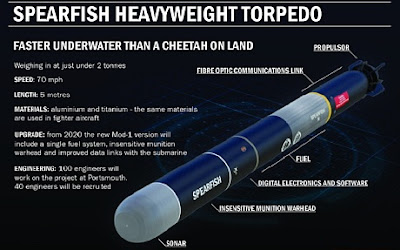 The torpedo is driven by a pump-jet coupled to a Hamilton Sundstrand 21TP04 gas turbine engine using Otto fuel II and hydroxyl ammonium perchlorate as oxidiser. The addition of an oxidiser improves the specific energy of the fuel by reducing the fuel-richness of the Otto fuel. The Spearfish, which are capable of traveling at 80 knots (150 km/h; 92 mph), were designed to catch high-speed, deep-diving Soviet threats such as the Alfa-class submarine. A microprocessor enables the torpedo to make autonomous tactical decisions during the attack. It has a powerful blast warhead, triggered by either contact detonation (against a submarine hull) or an acoustic proximity fuze (for under-keel detonation against ships). A standoff detonation under the keel enhances blast effects against surface ships through the amplification of stress resulting from the interaction of the explosion's products and the flexible structure of the ship.

In a typical engagement, Spearfish will run out wire-guided to the general vicinity of the target and then conduct a covert passive search. The high-capacity guide wire system, specifically designed to match the Spearfish's maneuver and speed envelope, provides two-way data exchange between the torpedo and launch submarine, maximizing the submarine's organic sensor and combat control capabilities.
Once at close range the Spearfish uses active sonar to classify and home in on its target. High-power transmissions and sophisticated signal processing enable Spearfish to accurately discriminate targets from background noise and ensure high resistance to acoustic countermeasures and/or evasive maneuvers
Should Spearfish fail to hit the target on its first attack, it automatically selects an appropriate re-attack mode until it successfully concludes the engagement.

I had fun doing this post :)
Posted by MrGarabaldi at 6:00 AM