It has been an eventful few days.  Super Tuesday recently happened and something happened to the Bernie Express... 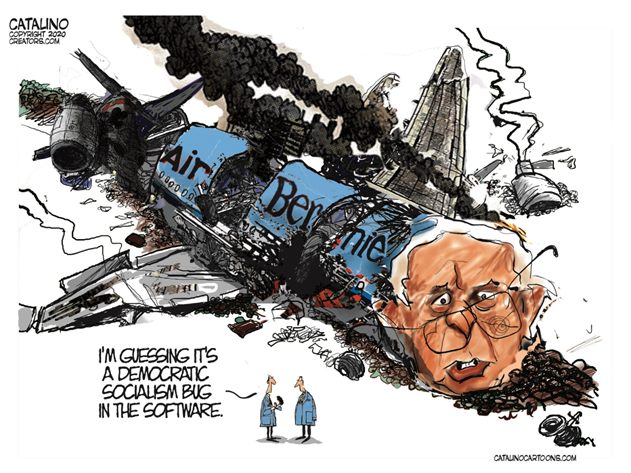 Bernie was ascending and his supporters are all pumped, they had this vision that they saw, the vision that their utopia was coming to fruition.    Back in 2016 I had used this cartoon to describe the political movement...

It took 45 minutes of me going through my "old Pic" folder to find it.
The movement is the same, Both Trump and Bernie supporters are more ardent than the "establishment candidates".  When Bernie gets the shaft at the brokered convention in June, and you know that it is going to happen like it did in 2016 when the super delegates shanked Bernie to give Felonia Von Pantsuit the Nomination to go up against Trump in the 2016 election. 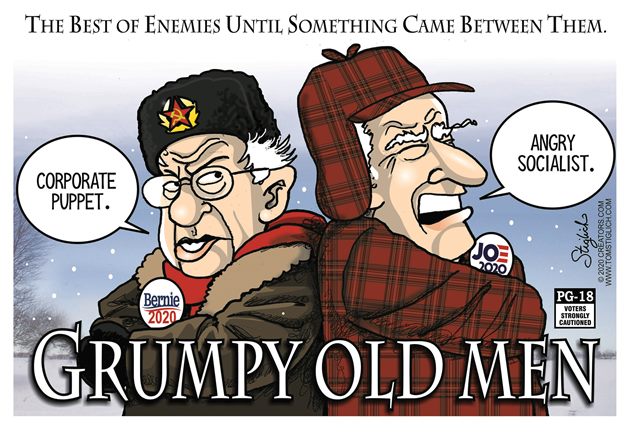 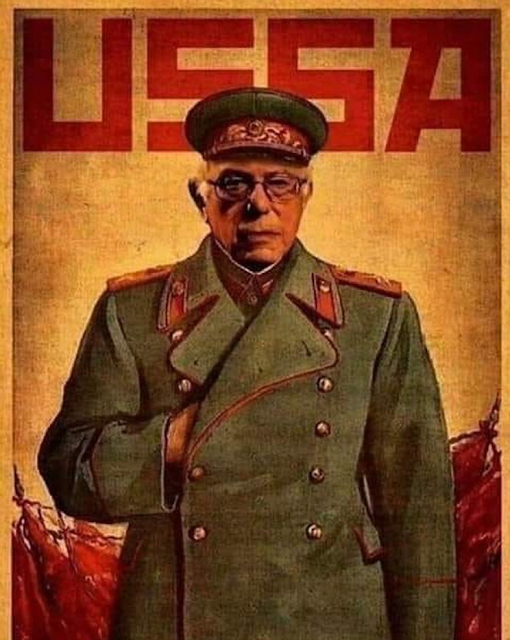 With the exception of his rabid supporters, most of the rank and file democrats have the hebejeebees in voting and supporting a person that is an ardent socialist and they are very uncomfortable with that option, so they are supporting the other old white guy... 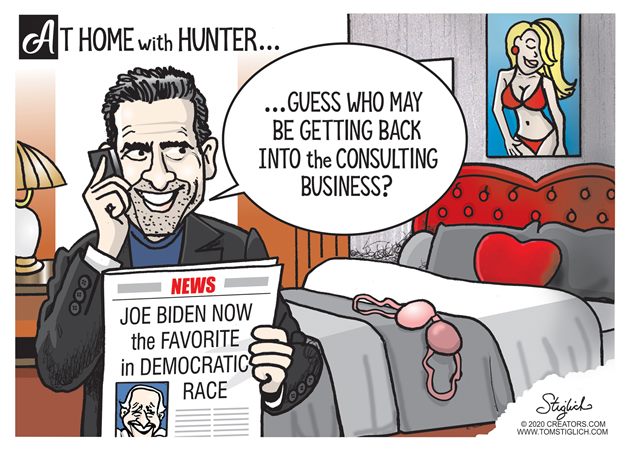 Who has his own baggage besides being in Washington for close to 40 years hasn't done anything of note except create gaffes, and questionable contacts with kids and females and his latest one with the union Ironworker who questioned him on his 2nd amendment policies and Joe called him out on it and threatened to "Take him outside", with the exception of the ideologically pure cost him a lot of union support, they vote with their pocketbook and things have been going good because of Trumps policies. This highlights the problems with the democratic party, they have no depth.  The Party was gutted by Obama and his policies, I and many pundits and political junkies have commented that Obama policies totally gutted the center out of the democratic party, the only ones that survived are the fringes that rode on his coattail.   It will be interesting to see what happens to them after Trump wins in 2020 because of all the crap the democrats have pulled since 2017 have pushed the moderates and independents into supporting Trump.  On the flipside I wonder if the Republicans will have the same problem when Trump leaves in 2024.  And speaking of elections the stock market has been flailing all over the place and the incessant drumbeat of fearmongering by the media has scared the crap out of people. 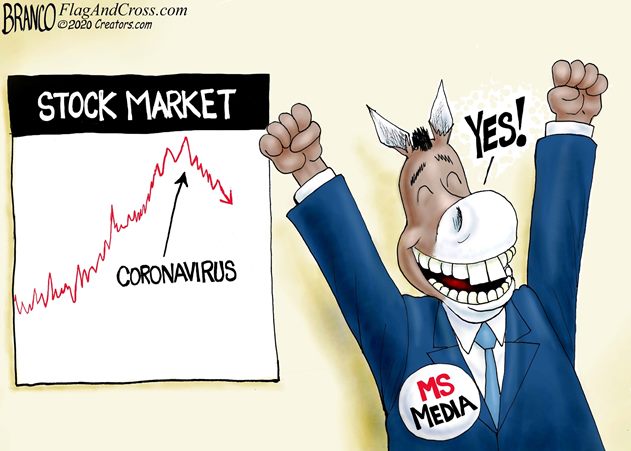 The media is ecstatic, they hope the coronavirus fears continue into the general election so they can use it to flog President Trump.  They gloss over the fact that it was the COMMUNIST Chinese that was responsible for this, the combination of Communist ideology of you can't criticize the actions of the Chinese Government because it is an ipso facto criticism of the Communist party and then you throw in the oriental practice of "Saving Face", and it really blew up and got out of hand. 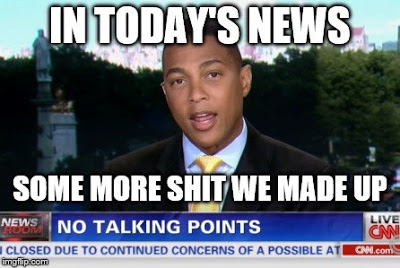 So the media is pushing the frenzy and people are running to the store to buy up all the handsoap and toilet paper.....WTF?     Why?    The Coronavirus is only dangerous to people who's immune system is already in deep doodoo for other reasons but lets scare the crap out of people because it is good for ratings and "Orange Man bad". 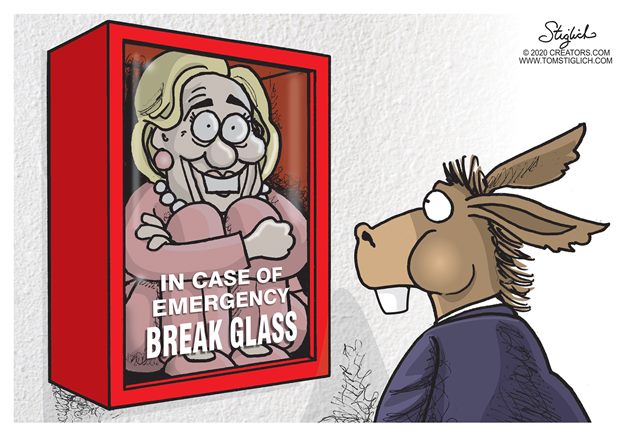 And speaking of the 2020 election, there is talk of the establishment Democrats trotting out the PIAP* to save the party from a sure Trump election win.  To the Party insiders, neither Bernie or Biden have the Moxie to go up against Trump, he would crush them.  They are hoping the 3rd time might be a charm, if nothing else it will bring in the female and Lesbian vote, that neither Biden or Bernie has really energized and optics are very important to the intersectional identity politics of the modern left. 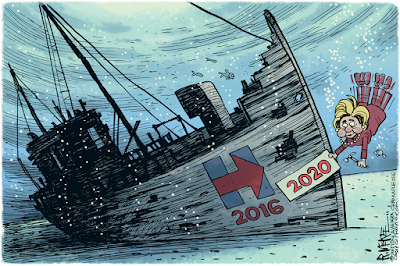 Of course Hillary hasn't squashed the rumors, there are talk about her being a Veep for Biden, and if I was Biden, I would hire a food taster ASAP because I can see another casualty of "Arkancide", and it will be "Madam President", which scares the crap out of me, she is evil personified, totally venal and with no human scruples.
On a personal note, the coronavirus effect has been felt in my industry, my employer is cutting flights and parking airplanes, they are in good shape financially and I don't fear for my job in the near term, but if this goes long term, my job could be in jeopardy and that is the sucky part.  I really don't want to go overseas to do contract work.  My brother had tried to get me to sign up and really make good money using my A&P.  I have resisted this because  my employer pays well but if something happens, then I will have to revisit this.

*Pig in a Pantsuit
Posted by MrGarabaldi at 10:31 AM

Email ThisBlogThis!Share to TwitterShare to FacebookShare to Pinterest
Labels: 2020 elections, musings and rants