I clipped this from SSG , This also was mentioned by the  ILOH at one of my favorite Websites, and he asked a question about people who were good at catching fraud.  Larry was an investigative accountant, and catching people stealing money was a specialty and he was pretty good at catching what he called "Red Flags" and there are a bunch of them, basically statistically impossibilities and he would ask others to vet what he comments and there are others that are more into number crunching than he is and they got more into it and they also agree with what he said and expounded on it.  you can check out on his website for more information.  The problem is that the media is totally in the tank for Biden and are burying the story because it is not in "their" interest to broadcast it. 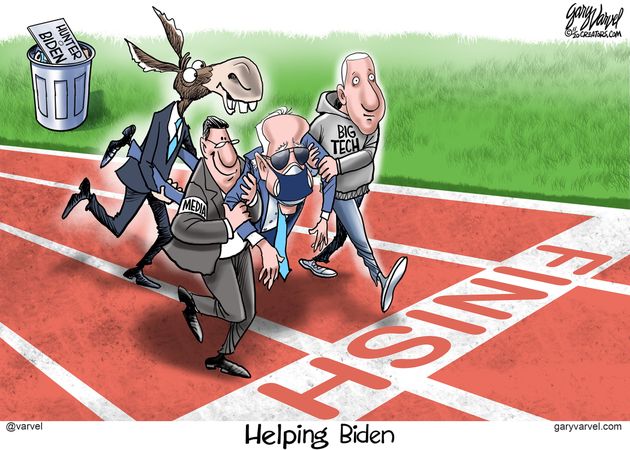 There is a dangerous unknown lurking in the 2020 Election vote count and it could change the results completely. The number of mail in ballots rejected for flaws is incredibly smaller in this election than in either of the previous two national elections.

That question cannot go unanswered if we are to have any confidence the results are accurate.

In the 2018 election 30 million mail in ballots were cast.

“election officials tossed out more than 425,000 mail-in ballots — about one in every seven ballots returned. Again, signature issues were cited for the largest portion of rejections.”

That’s a rejection rate of approximately 1.4% overall. In this year’s election it appears the number rejected will be well under 1% according to experts.

“You’re going to have 80 million absentee ballots cast, and hundreds of thousands may have problems. But 99 percent or more of them will count.”

This New York Times article and its experts offer several theories for why such an epic shift in acceptance rates is happening including changes to state laws. Minnesota no longer requires ballots to be witnessed and Pennsylvania’s Supreme Court ruled that ballots can’t be rejected for signatures that don’t match.

This may get more ballots accepted but it’s impossible to argue it increases the validity of the ballots being counted. It obviously removes important safeguards to a process that already happens without actual scrutiny. When you mail out ballots to every eligible voter as many states did, you have an obligation to ensure that only those completed properly and by the actual voters are accepted.

It is difficult to believe that suddenly this election the voters using mail in ballots suddenly got much smarter and more diligent. There were efforts to explain how to properly fill out the ballots, but anyone familiar with the effectiveness and conversion rates of public service announcements, as I am, will tell you they do not create more than marginal changes to the public’s knowledge or acceptance.

The factor most likely responsible for this change is much less strict enforcement of the acceptance standards and lowered standards of some states. We must conduct a thorough audit of all mail in votes in contested states to ensure that only those which can be positively identified as valid are counted.

A county by county examination in Pennsylvania showed an increase in acceptance rates of 30x historical norms. It is implausible that amazing shift could have occurred without a significant number of improper or even illegal ballots making it through. And there are plenty of witness statements alleging that ballots with obvious disqualifying flaws were put into the count.

The main reason for rejection of ballots in 2018 was signatures missing or not matching. While some of those are simple mistakes on an otherwise valid ballot. Signature issues are major red flags for fraud. The methods used to validate them are based on solid science and if a ballot is rejected for lack of a signature match it is likely someone other than the voter signed it.

While those ballots have historically been rejected it is a clear sign of voting fraud of some sort. This year those ballots are just being added to the mix as are the ones with no signature. This has allowed large numbers of essentially anonymous ballots into the election to be treated as equally verified as an in-person vote.

Another factor has been increased attempts to “cure” ballots with defects by contacting voters and having them fix the issues prior to the ballot being accepted. This is a proper way to ensure that every valid vote is counted, but this seems to have been abused as well.

In what seems to be a clear violation of Wisconsin state law, the elections board there sent out instructions to the election clerks telling them to fix ballot defects themselves.

“Please note that the clerk should attempt to resolve any missing witness address information prior to Election Day if possible, and this can be done through reliable information (personal knowledge, voter registration information, through a phone call with the voter or witness),” WEC wrote. “The witness does not need to appear to add a missing address.”

This is in complete defiance of Wisconsin law which requires the ballot be returned to the voter for fixing.

Wisconsin Statute 6.86 provides that an absentee ballot must be signed by a witness, who is also required to list his or her address. If a witness address is not listed, then the ballot is considered invalid and must be returned to the voter to have the witness correct.

In Wisconsin’s April 2020 primary a significant number of ballots were rejected.

For comparison, about 1.5% of absentee ballots were rejected in the 2019 spring election, while spring votes in Wisconsin netted rejection rates between 2% and 2.5% from 2016 through 2018, according to WEC.”

This shows we could be talking about considerably more ballots affected by this illegal fix than the deficit of 20,000 votes President Trump currently faces. This will also be the case in other states if standards were lowered or ignored to allow ballots into the count that were not properly validated

It is easy to say that this is a positive improvement as it means more people participated in the election. And if all of those additional ballots were valid and lawful votes, that would be correct. But they cannot be. The number of invalid votes increased significantly too. And we must know how much that was before this election is final and certainly before we can decide if widespread mail in voting is trustworthy