I saw this on American Rifleman and since I own both a Garand and a 1903A3 or I did before the tragic kayak accident*sniff*. 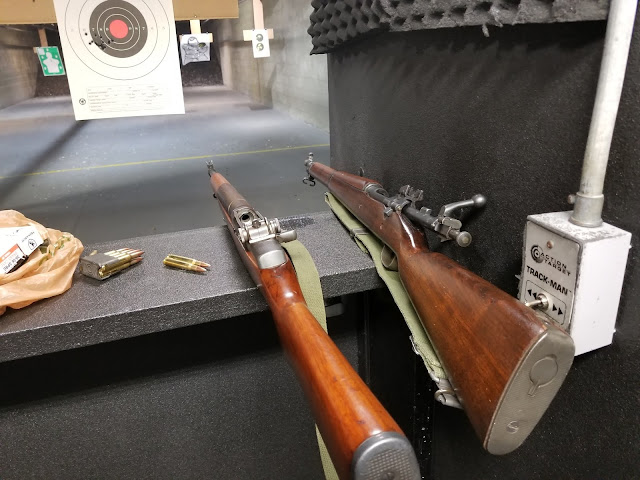 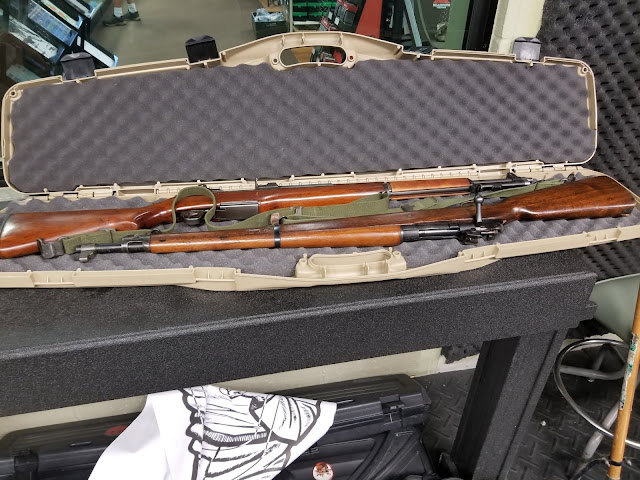 Although the M1 Garand is thought of as being the central American rifle that did all of the fighting during World War II, there was another that armed U.S. fighting forces throughout the conflict. The M1903 did much more fighting between 1941-1945 than we give it credit for, and a commercial manufacturer made most of the examples of the rifle that did that fighting.

Two Remington produced M1903 rifles, with a standard style M1903 in the foreground and a simplified M1903A3 in the background.

Even as the M1 Garand went into production at Springfield Armory in 1937, the old M1903 remained the standard service rifle of the U.S. military. The design had proven itself in combat during the Moro Rebellion, World War I and the interventions in Siberia and Nicaragua. The M1903s that did all of the work in those combat zones were produced at either Springfield Armory or Rock Island Arsenal but, by the mid-1930s, they were reaching the end of their service lives.

A closer look at the Remington M1903 and M1903A3. Note the simplified band, relocated rear sight and redesigned handguard on the M1903A3.

While re-barreling could extend that, there was still another big problem. By late 1939, wars were raging in both Europe and Asia, and it was recognized that hundreds of thousands of rifles would be needed if the U.S. was drawn into either conflict. It was also known that the quantity of M1903 rifles on hand was not nearly enough, and that it would take too much time for Springfield Armory to produce the new semi-automatic M1 in sufficient numbers to meet the needs of a full national mobilization.

A overhead view of the receiver markings on the Remington M1903 and M1903A3.

In an effort to address this potential disastrous shortage of service rifles, the U.S. government issued a contract to Remington Arms in September 1941 to put the M1903 back into production, using the old Rock Island manufacturing equipment. At first, the Remington M1903s generally resembled the rifles produced at Rock Island toward the end of World War I, but then Remington began introducing modifications that were designed to reduce production time and decrease production costs.

Grasping grooves on the stock were eliminated, as well as several unnecessary machining steps, and non-critical tolerances were relaxed. These so-called “Remington-modified” M1903 rifles began entering service shortly after the U.S. went to war, but the model did not last long. As Remington continued to turn out guns, the design was simplified for mass production over and over again until it eventually became an entirely new model.

Soldiers from the 320th Barrage Balloon Battalion are seen here hunting a German sniper at a farmhouse in St.-Laurent-Sur-Mer in Normandy on June 10, 1944. The man at left is armed with an M1903A3 rifle. (National Archives and Records Administration/U.S. Army Signal Corps 111-SC-332023).

On May 21, 1942, more than 8 months after the original contract with the company had been signed, the M1903A3 rifle was standardized. The M1903A3’s design made use of stamped sheet-metal construction for the upper band assembly, the lower barrel band, the front sling swivel, buttplate and trigger housing along with the floorplate. A fully adjustable rear-peep sight assembly was added to the rear receiver band, increasing the rifle’s sight radius by 5”.

Approximately 80 miles north of Lashio, Burma, U.S. Army infantrymen engage Japanese troops in a fight for control of a section of the Old Burma Road. The overland link was a vital supply connection for Allied troops fighting in the China-Burma-India Theater. The man closest to the camera is armed with an M1903A3 rifle that has the word “HELL” etched in the wood of the stock. (National Archives and Records Administration/U.S. Army Signal Corps 111-SC-200054-5).

The Ordnance Department approved the introduction of two-groove rifling for the barrels in October, 1942, and deliveries of the new design began two months later. By the end of World War 2, Remington had produced 348,085 standard M1903 and “Modified” M1903 rifles in addition to over 700,000 M1903A3s. These rifles served from Algeria to Burma—from Peleliu to Salerno.

In this well-known photograph, U.S. Army soldiers – one of whom is armed with an M1903A3 rifle - talk to newly liberated prisoners of the concentration camp at Buchenwald near Weimar in Thuringia.

They came ashore in northern Europe during the Normandy invasion, they crossed the Rhine River and they liberated concentration camps. In fact, when U.S. troops reached the camp at Buchenwald near Weimar, Germany on April 11, 1945, at least one of them was armed with an M1903A3. While the M1 Garand rifle turned-in legendary service during World War II, the M1903 did, too, and it is worth remembering that most of the examples produced during the conflict had the name Remington on their receiver.

Email ThisBlogThis!Share to TwitterShare to FacebookShare to Pinterest
Labels: 1903, Remington