I figured it would scar the alphabet boys if they come busting in and hearing a song that is related good music in the 1980's unlike that crap they listen to now.  What can I say, My humor is warped....just a bit. Next week will be "Another one Bites the Dust" by Queen ,  Now that should really cause some psych evals., hehehe, some poor ATF guy trying to explain the attraction to his mother because he has the hots for a bunch of guys that were into really heavy metal and were responsible for the start of the heavy metal movement in England......But hey it is ATF...and they ain't right anyway.

I decided to go back to the 80's, which is my favorite decade....I mentally threw some dice and flipped a quarter and went with SLADE, a British Glam Rock band that has a heavy metal influence.  This song I first saw on MTV..You know back when they played music, this song followed on the British New Wave invasion.  Some people panned the 2nd British Invasion, but the music was to me fresh and different than the stuff that was presently being played.  The influence of the New Wave invasion changed the face of the music in the 80's and helped make it iconic for the era. 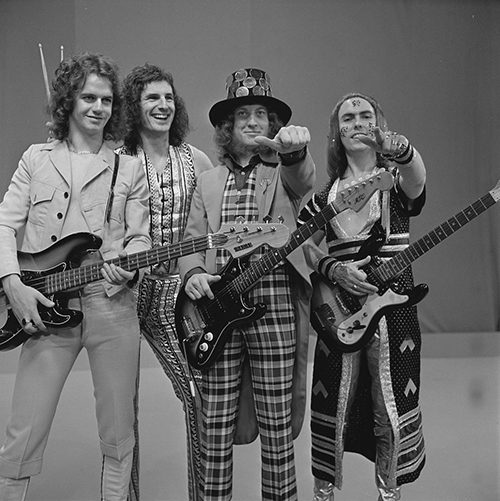 Slade in 1973
"Run Runaway" is a hard rock song performed by the English band Slade. The song was written by Jim Lea and Noddy Holder and was on their 1983 album The Amazing Kamikaze Syndrome. It reached No. 7 in the UK Singles Chart, and proved to be the band's last U.K. Top 10 hit single.
The Amazing Kamikaze Syndrome album was released in 1984 in the United States with a different track listing under the title Keep Your Hands Off My Power Supply. That same year, the single "Run Runaway" became the band's biggest American hit, benefiting from heavy play on MTV, peaking at No. 20 and spending a total of eight weeks on the BillboardHot 100's Top 40. It was also number one for two weeks on the Billboard Top Tracks chart.
The single was included on Canada's official 'Top 100 Singles of 1984' chart, where Run Runaway peaked at No. 84.
The melody is inspired by the hymn "There Is a Happy Land." Holder himself summed the song up as "a rocky Scottish jig."
The lyrics memorably concern observing a chameleon.
Dave Thompson, from allmusic described the song as "building on the anthemic power of the earlier "My Oh My" - itself their biggest U.K. single in nine years - "Run Runaway" is raucous chanting, swirling guitars, wild violin, and even a taste of heavy metal bagpipes, helped along by a drum sound that is pure early '80s."
After being asked for his favourite Slade song, vocalist Noddy Holder replied that although "Far Far Away" was his favourite, hearing "Run Runaway" on the radio a few days before the interview really knocked him out.
For the September–December 1986 Slade fan club magazine, Lea was interviewed and was asked to share where he was when he wrote various Slade tracks. For "Run Runaway," Lea stated it was written whilst he was holding a conversation with someone.
In a mid-1989 Slade fan club magazine interview, Powell was asked if there was a Slade track that he felt was one of the band's best efforts on record. Powell replied stated that "Standin' On The Corner" from the 1975 album Slade in Flamewas a favourite. Powell also stated "The 12" version of Run Runaway, I liked doing that one as well."
The single peaked at No. 193 for 1984 on rateyourmusic.
In the September–December 1986 Slade fan club magazine, the poll results were announced for the 1986 opinion poll based on Slade’s material. For the best single of the 80s, "Run Runaway" placed at No. 2.
The song is played frequently at UMass-Amherst basketball games. 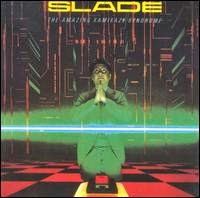 A music video was created for the single, filmed at Eastnor Castle in Ledbury, Herefordshire, England.
The track was also performed on many UK TV shows including Top of the Pops, Hall of Fame and a filmed performance at the Rhyl Sun Centre. The song was also performed on an unknown German TV show, an unknown Swedish TV show along with My Oh My and on an unknown European TV show.
The track was performed at Montreux Festival in 1984 along with "Slam the Hammer Down." In America, the song was also performed with the 1984 hit single "My Oh My" on American Bandstand.
In 1985, the band performed the song on the UK show Saturday Live along with the newer single "7 Year Bitch." This performance featured live vocals and a different backing track for both songs. In 1987, the band mimed the song on the UK show The Tom O'Connor Show, along with the band's current single of the time, "Still the Same."
The video for this single was a Tim Pope video for GLO Productions that cost RCA £16,000 to have made. The filming was made entirely at Eastnor Castle at Ledbury. As the song had a ‘Highland Jig’ feel to it, so did the video. The band were featured live in front of an audience dressed in tartan. Sequences were of a marching bagpipe band, an enormous kilted scot grappling with a caber and Hill looking very mysterious on the castle ramparts.
The band was let down by the film crew in so much as Powell was not featured in the video at all - he can only be seen in the background. Lea stated that the only requirement that Slade insist upon when they make a film is that all the band are featured, and this wasn’t the case when they saw the finished version of this video. The film was a great success in the United States, peaking at the top of the playlist charts. It’s constant showing on MTV helped Run Runaway become Slade’s biggest American single, reaching the top twenty. Lea recalled that one video jockey even announced; "…and believe it or not that set in the video was an actual castle, it wasn’t constructed just for the film…"
After filming the music video at Eastnor Castle, the band returned to the place where they'd once played their third ever live gig under Chas Chandler's management. The gig was an end of film party for the cast of a film that starred Sammy Davis, Jerry Lewis and Peter Lawson. The band got very drunk during the gig, and Noddy Holder stole a flat cap from the dressing room. On the way home the band were stopped by the police who questioned them about a theft. At first the band thought it was about the cap - but it didn't concern that at all. The police were looking for some antiques stolen from Eastnor Castle.
In the September–December 1986 Slade fan club magazine, the poll results were announced for the 1986 opinion poll based on Slade’s material. For the best promo/video film, Run Runaway placed at No. 1.
In December 2011, the very coat that Hill wore in the Run Runaway video sold on Ebay.co.uk for £295.00. Hill also wore the coat on many European TV shows around the time. The seller had bought the coat many years ago from The Slade Fan Club where Hill auctioned off a few items to raise money to build a recording studio in his loft at home. After winning the auction, a cheque payable to Dave Hill was made.
Posted by MrGarabaldi at 5:00 AM