Some goings on at Casa De Garabaldi

This will go in Chronological order, several things happened.  I am using my "Old Laptop" to do my blogging, it is better than nothing but things happened here at Casa de Garabaldi..some bad and a lot not.  First off back in April My Dad Passed away. 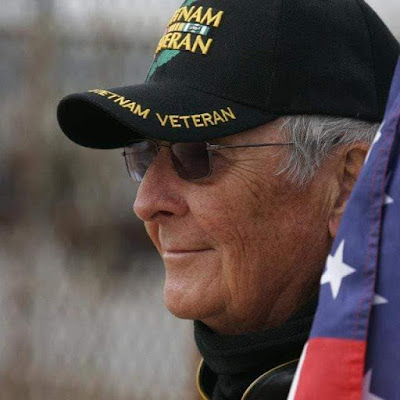 I had gotten more details, the cause was his heart ultimately failed him, but it was 3 weeks to the day after his 2nd "jab" that he passed.  According to my Stepmom, you could see the "slide" after 24 hours until his passing.  Needless to say it solidified my opposition to getting the "Jab".  Besides I already had "da Covid" as did my wife and kid, so as long as my employer don't demand it as a condition of employment I will not get it. They did say that any new hires have to already have it.  They are playing it smart, they are "encouraging" everyone to get it, but not demanding it, not putting them legally on the hook if it goes bad unlike some of the other airlines that are demanding it of their employees. 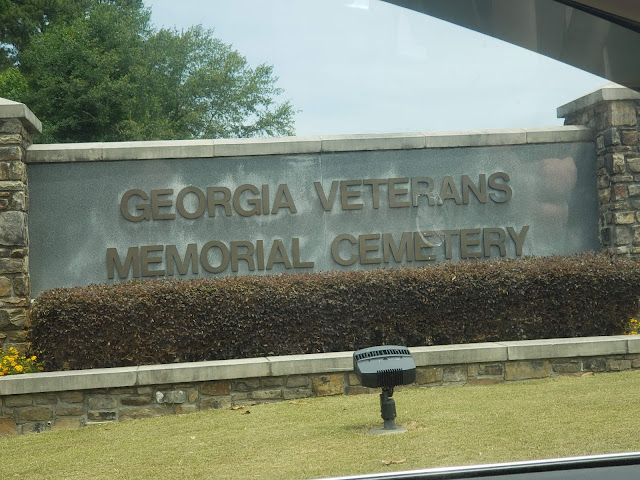 Well we had the memorial service last week, We had to wait for my brother to return from certain place overseas, it was already planned out long in advance between my Dad and my Brother, If my brother had returned back early, it would have disrupted his return for his daughter(my Niece) graduation from high school so my Dad had my brother promise to return at the normal time. my brother was on a rotation schedule with so many weeks here and so many weeks "over there", you know what I mean.    My Dad had everything planned out.  he knew that his last lung operation 2 years ago that it could go pear shaped in a hurry and so he had everything already set and planned out as much as possible to spare the load on my stepmom. 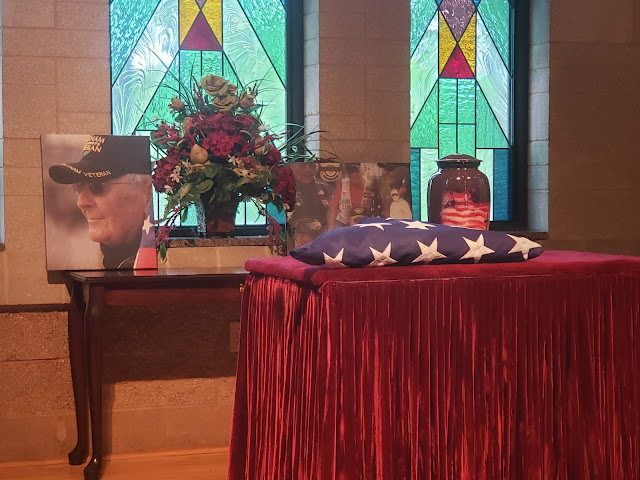 I took a quick picture before the service started, I don't know if it was appropriate or not, and I didn't care.  it was a really good service and my stepmom had a person playing "Amazing Grace" on Bagpipes played by a real bagpiper because that is what my Dad wanted and when it started playing when the urn left to be interred, there was not a dry eye in the place.  The flag on the table I got and the other flag, my brother got. I had to mention the passing on my Dad back in April to the Service on Thursday to tie them together.  I do have a picture of the marker, but I will not post it, I do value my anonymity, something about not getting fired, LOL   I will be planted in the same place as my Dad It was cathartic for me to write this on my blog, I do miss my Dad and I know that eventually I will see him when St Peter has my orders cut and I report to Fiddlers Green , but I hope not for a while if y'all know what I mean. 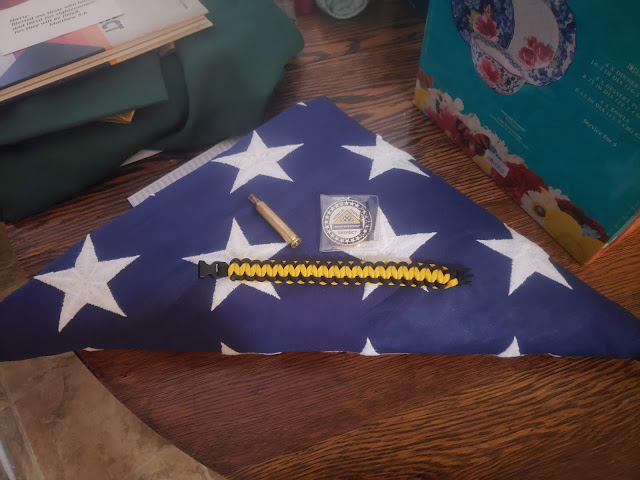 My Dads Flag, along with a shell from the 21 gun salute and a coin from the Patriots Guards Riders who were out in force because both my Dad and my Stepmom who is a Ride Capt are heavily involved. 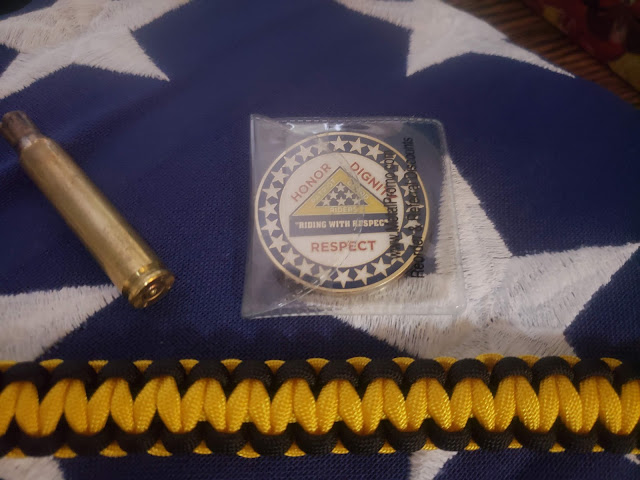 Closeup of the coin and the shell, I will be buying a "Shadowbox" today probably
On a different note, I decided to upgrade the Focus a bit, I bought some LED Fog Lights, 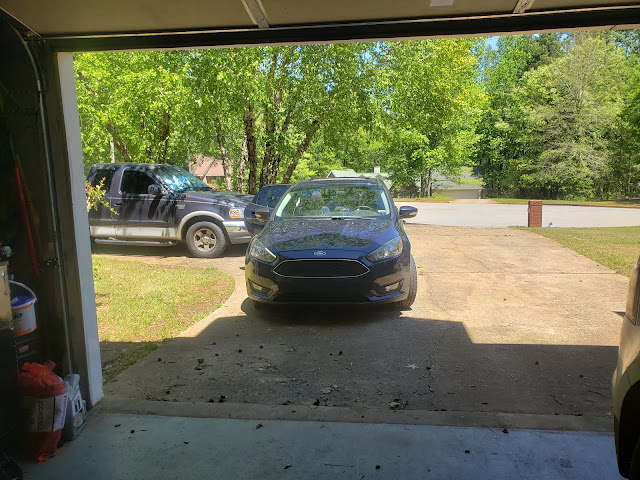 I brought the car a bit into the garage, and pried off the foglight cover 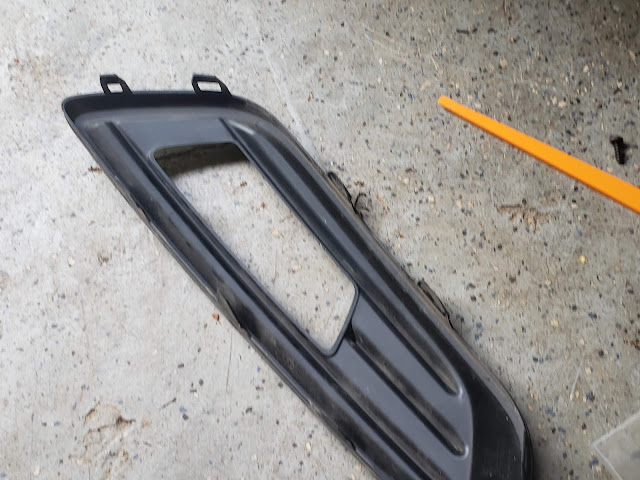 Then I looked at the light on the car... 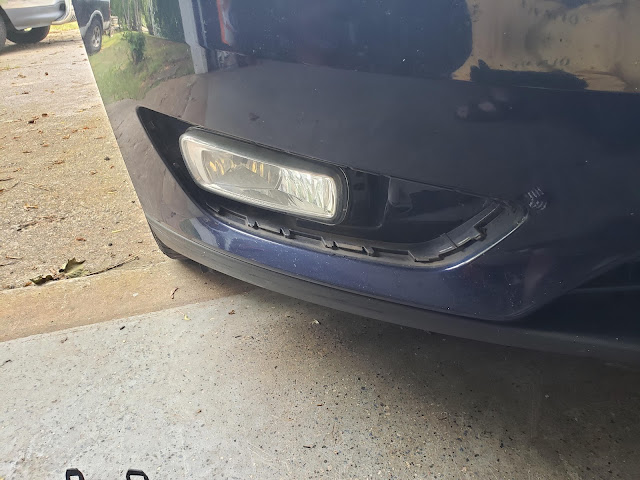 Saw that there were 3 "Torx" bits holding the light in place.... 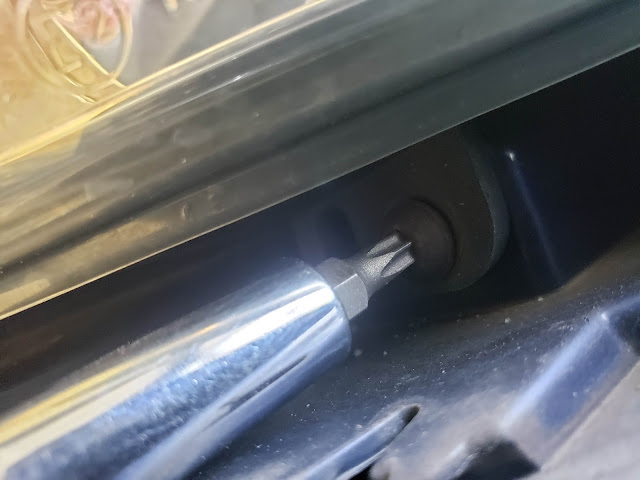 I used a screw driver with a bit holder, I normally don't use a cordless motor for stuff like this, good way to strip the head when you put them back on and when you remove them, the torque from the motor can spin the screw off into unexpected directions that include places that you can't reach and since it is only 3 of them, it isn't worth the hassle....now if there was 20 of them.....then out comes the motor... 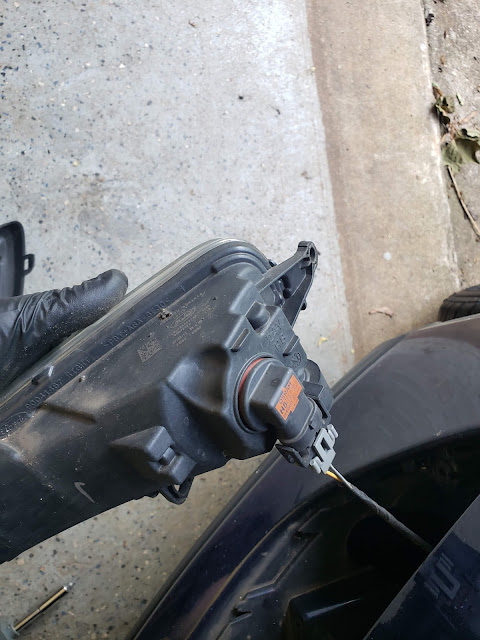 I pulled the light out, the LED lights were "Plug and Play", y'all also notice the gloves I am wearing...Its a habit I have when I am working with any kind of lights, your skin, especially your hands have oils on them that leave a residue on the bulbs and that will shorten the lifespan of the bulbs, so to prevent burning out a bulb early, I always wear a glove.   I plugged in the new bulb and reattached the lens the car. along with the cover 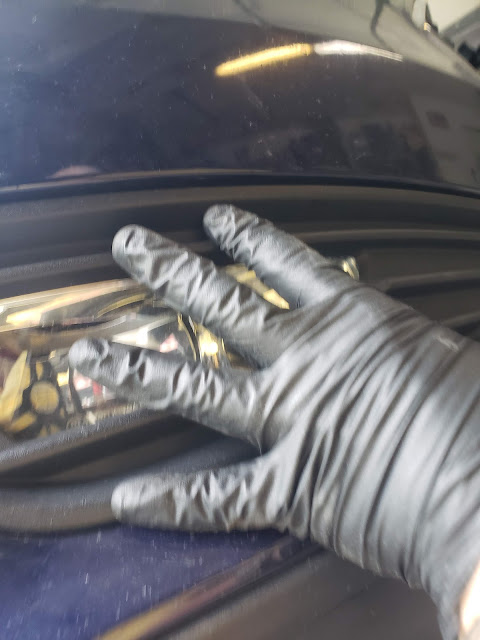 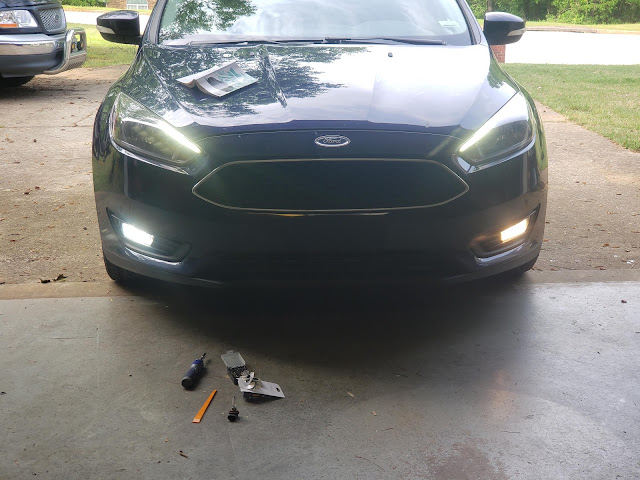 You see the difference between the left and the right, the passenger side is the one that has the LED light.    I then repeated the process for the drivers side... 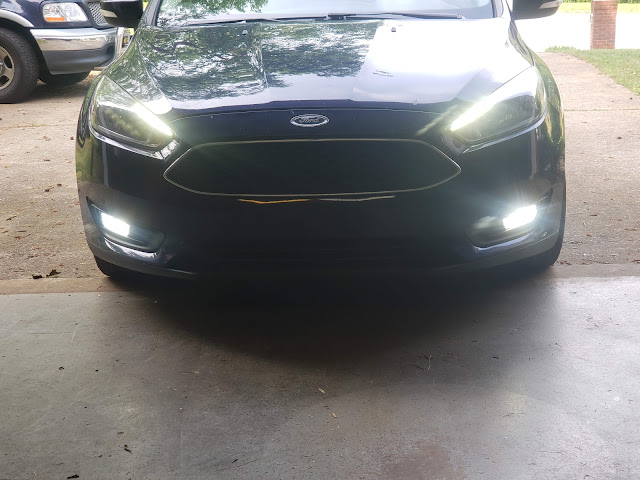 Quick and easy Mod,   I have gotten the LED lights for the highbeams, but not the regular lights, so I haven't changed them out yet.  The rest of the car already is LED either from the factory or I had converted it. 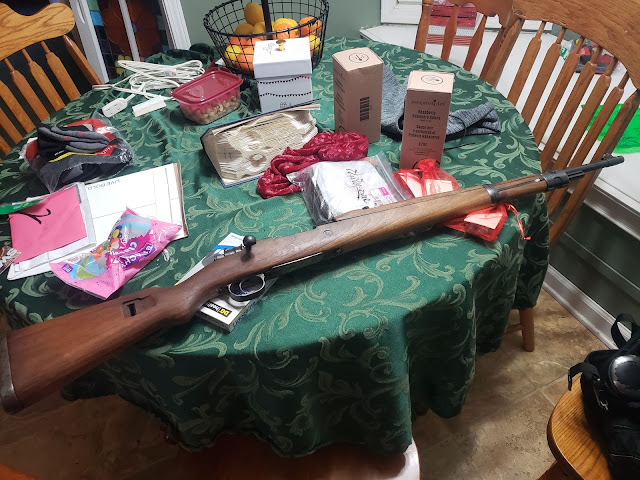 I had bought an old Mauser a while back, and the wood was really dry because it had been in storage for so long, well I had rubbed some linseed oil on the stock to try to help the wood, but it had raised the grain.  And one of my readers suggested a formula from his grandfather.  I used 600 grit sandpaper and sanded down the stock after taping off the metal, and using 1/3 linseed oil, 1/3 turpentine and 1/3 beeswax..well the only beeswax I would find was this stuff.. 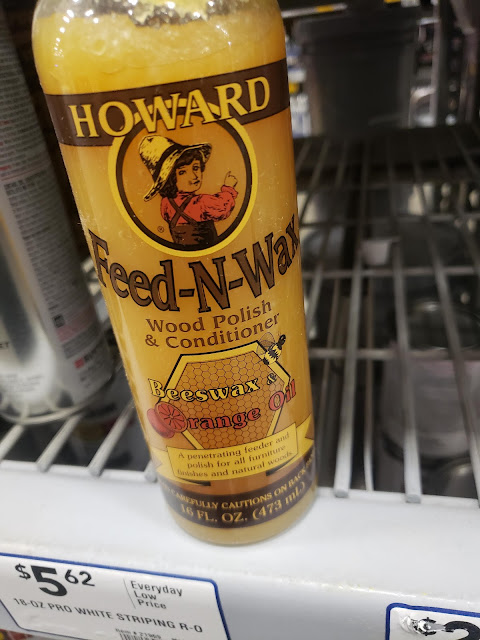 Well I mixed them together and rubbed the mixture into the rifle and let it set for a day, then repeated the process.  Man what a difference, 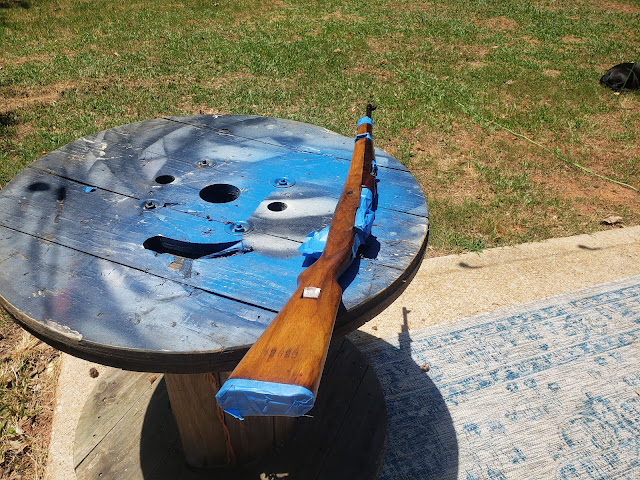 The pictures don't do it justice, it looks really good.  The thing is that you have to let it sit for several days to let the mixture soak into the wood really good, if you handle it too soon, you put fingerprints all over it.....ask me how I know....LOL.  and Thanks Rick for the recipe, you made an old rifle look really good. 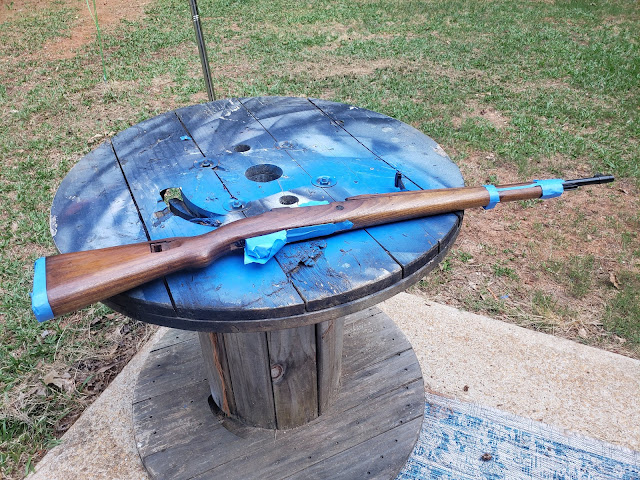 We took my Son on a lake house for vacation, as a reward for graduation, Now I can retire my Tazer, LOL.  The same week my laptop crashed, that is why I haven't blogged much.  Using my baby laptop is problematic for blogging.  it eats paragraphs.  It is better than my smart phone....but not by a whole much. 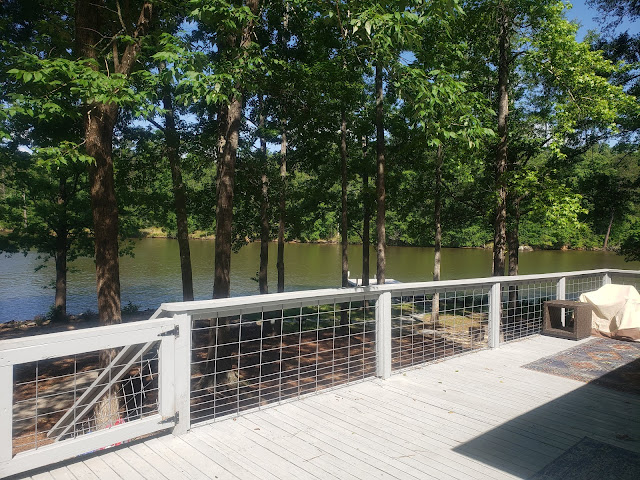 It was a very nice House, I just relaxed, whereas my son and his friends fished a lot, and did the kayaking thing, and got waved at by the girls when they came by on the motorboats, usual lake stuff, LOL and we had the firepit going at night 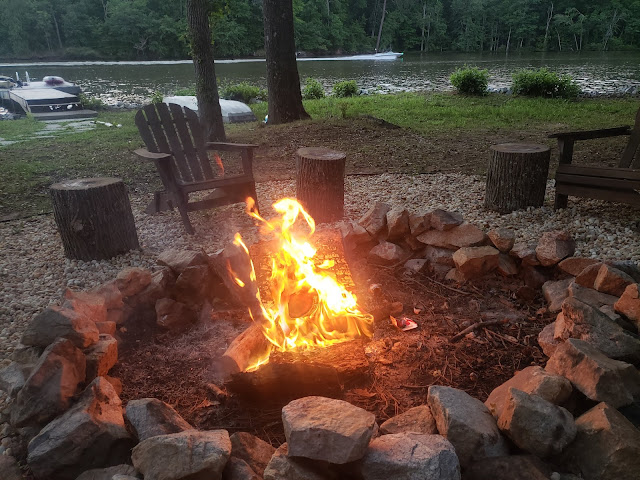 While we were there, we went to one of the WMA's that had a good shooting range and the kids fired skeet and Trap.  My son gotten one of his non shooting friends into shooting trap and he bought a "Tristar" pump shotgun with a 28 inch barrel and it take beretta chokes so this kid was stoked busting clays at the range. 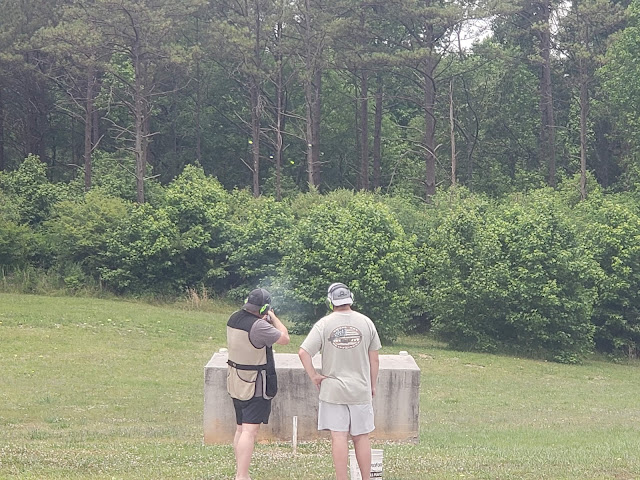 Shooting at the "Trap House" 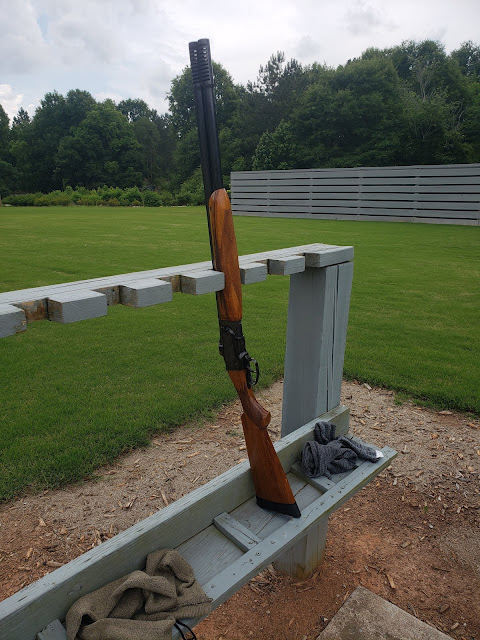 My Over and Under waiting for my Son to shoot skeet, they have a really nice skeet range, all you need is a fishing license to shoot there, so I bought one so I can shoot also. 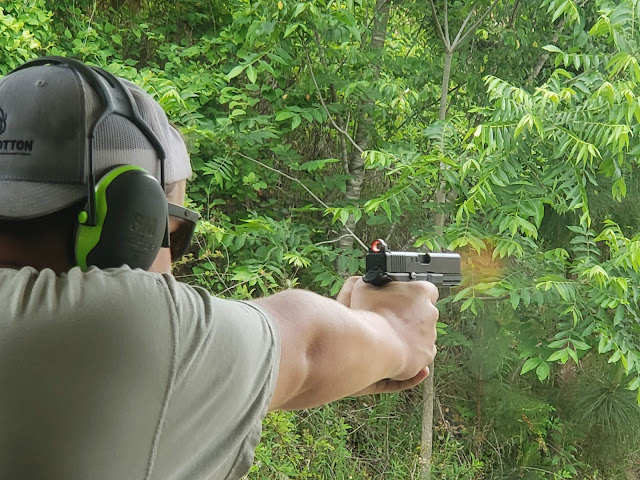 My son shooting My Dads Glock, that pistol shoots really good especially with the  holographic sight on it.  I also fired my reworked Sigma, the one that my friend Mack had to tweak, I had added a new apex trigger and springs because it was reliable, but the trigger flat out sucked.  Well when I put in the new trigger, it no went bang anymore.  And I know enough to know to call for help and Mack came to my rescue.  He had told me that I had installed it correctly, and that the fault was in the "vagaries" of the molding of the Sigma itself, the first generation were not 100% identical so Apex "Shot the Margins" as they say, so you basically had to "tweak" it after you installed it, so Mack had to tweak it.  And the Sigma ran much better, although I had a couple of FTF, and those was attributed to old magazines, I had asked Mack about that and he concurred, he noticed that when he fired it because I still had the "Clinton Gun ban" magazines with the pistol, you know the 14 round magazine with the 10 round crimp?  So I am going to have to buy new magazines.  he recommended OEM because 3rd party magazines are not as reliable.  He also noticed something else..he put an older Glock upper on the Sigma lower...and it fit!, and that explained the lawsuit, LOL when Glock sued S&W back in the 90's,

On a different note, it seems like the country is falling apart...between the gas prices, the inflation, the debt, the Middle East....but I guess the Biden Supporters have one thing going for them 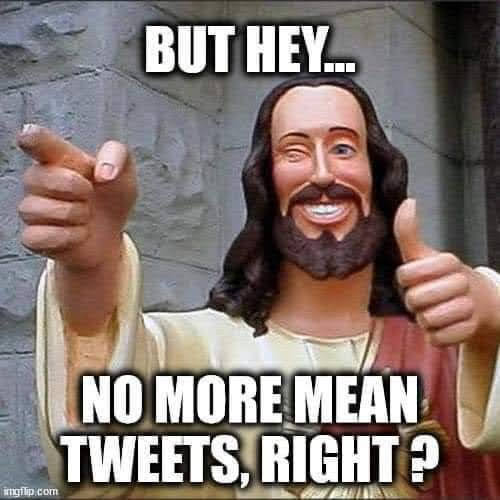 We had a good week, Didn't want to return to work. lemme tell you