I ran across this article and it was something that I had never heard of, that a replacement for the venerable 707 might have been a DC-10.  Personally with the problems that the DC-10 had and as I recall, the FAA pulled the "Airworthy certificate" due to the cargo door issues for a bit until McDonald Douglass got it figured out and the airplane turned out to be a good airplane, but there was a stigma attached to the plane until more time elapsed and her safety record was comparable to other 2nd generation aircraft. 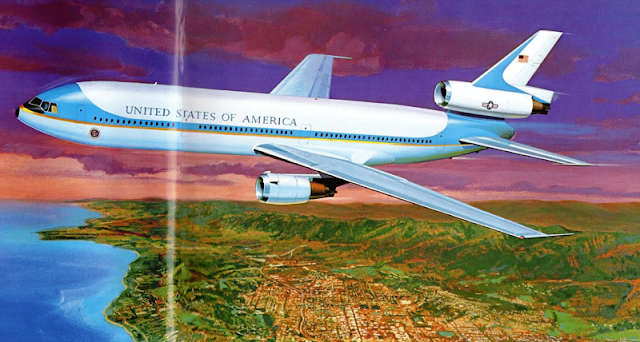 Air Force One is the descriptor for any aircraft carrying the President of the United States, but to avgeeks it generally refers to the highly customized Boeing 747-200 (VC-25A) with the unique Raymond Loewy designed paint livery.  It is a powerful symbol of the United States of America,  and commands a presence wherever it travels.  Serving as a mobile command center for the President when he travels, it features over 4,000 square feet of space accommodating the President, his staff, and a small traveling press pool.  Many wonderful and detailed books have been written on the history of aircraft that have transported the President.

In 1985, the VC-137C was reaching nearly twenty-five years in service.  As a result, the United States Air Force (USAF) began to plan for a replacement aircraft.  After internal requirements had been set, the USAF began to send out request for proposals (RFP) to Boeing, Lockheed, and McDonnell Douglas.  General John Michael Loh was appointed to Air Force Director of Operational Requirements in 1985, and Loh’s job was to find a replacement aircraft and suitable proposals for the aging VC-137Cs.  There were really only two choices at the time of this new RFP from the USAF:  The Boeing 747 and the McDonnell Douglas DC-10.  Lockheed’s L-1011 had ceased production, not to mention it barely met the endurance requirement the Air Force had set, and Lockheed wasn’t about to build an all new aircraft for the VC-137C replacement nor restart the L-1011 production line

Boeing of course offered the Boeing 747-200 aircraft, even though the Boeing 747-300 had entered service two years prior. The 747-200 had more in common with the current fleet of E-4B aircraft, the Advanced Airborne Command Post, that were flying for the USAF.  Boeing knew that with the E-4Bs flying, the current Presidential aircraft being a Boeing with four engines, and that the 747 easily met or exceeded all the operational requirements, it had the advantage to walk away with the contract award.  Boeing was also keenly aware that both Lockheed and McDonnell Douglas had no interest in competing for what they viewed as a sole-sourced competition that had already been decided in their view.

What happened next was chronicled in Air and Space Weekly in a fascinating article by Lara Seligman back in 2016. Seligman interviewed Gen Loh for an article that discussed the latest acquisition of the Boeing 747-8i to fulfill the role as the next Air Force One. According to the article, Boeing met with Loh, and presented its proposal: two Boeing 747-200 aircraft retrofitted with all the custom fitment, countermeasures, and other operational requirements that the USAF requested at just under $1billion USD in 1985 ($2.4billion adjusted for inflation in 2020).  Boeing was in for a rude awakening.

The list price of the Boeing 747-200 in 1985 was $112million for green aircraft (new), or $224million for two aircraft, and this was the list price before discounting (which generally occurs).  Boeing was then adding nearly four times the cost of the aircraft for customization and fitment to meet the USAF’s requirements.  Loh was reportedly furious at the estimate, and knew that unless he had a viable and alternative proposal, he’d have very little leverage against Boeing’s proposal.

McDonnell Douglas submitted a proposal based on the DC-10. They produced a book in 1985 called “C-10 – The Presidential Aircraft” with details about their proposal.  The C-10 was centered around the DC-10-30 as the baseline aircraft because of its longer endurance range, time in service, and in-service reliability.   The offering had integrated air stairs at the center-main passenger and rear doors on the port side, and numerous options including inflight refueling.  For comparison purposes, McDonnell Douglas compared the C-10 to an ‘equivalent’ competitive aircraft: The Boeing 747SP, not the proposed 747-200.  The C-10 was also presented as an aircraft that can operate from many more airports that the 747SP could not.  Comfort, performance, and reliability were based on the commercial DC-10 counterpart.

McDonnell Douglas showed the C-10 as 17% less expensive per flight vs the 747SP with an estimated operating cost of $30,000 for a 2,000 nautical mile trip (using $1 a gallon fuel cost from 1983), and that the maintenance and fuel costs as being 37% more efficient vs the Boeing aircraft (using a Boeing performance report #D6-33819).   McDonnell Douglas took another dig at the Boeing 747 by noting that it couldn’t utilize the existing hangars at Andrews AFB, and the USAF had already estimated new hangar facilities would add another $40 million to the cost of operating any 747.  The C-10 could use the existing hangar facilities

The C-10 even included a proposed floor plan, that featured a stateroom in the front of the aircraft, and a radio operating station in place of the forward galley (which had been moved to in front of the main door entrance).  Medical and conference facilities were mapped out, as well as sections identified for traveling staff, executives, and areas for media.  The rear featured a full galley as well as stairs to the lower deck, while the front galley had a lift to the lower deck.

The McDonnell Douglas proposal was substantially lower than Boeing’s proposal, and had the desired effect that Loh had wanted: Boeing dropped the price in their proposal from nearly $1billion for two modified aircraft to just $249 million in a fixed-price contract according to Loh.  In the end, Loh’s pressure on McDonnell Douglas to submit a proposal for a VC-137C replacement was a win-win for both the USAF and McDonnell Douglas.

The USAF saved nearly $700million ($1.6billion adjusted for inflation in 2020), and it won brownie points for McDonnell Douglas at the USAF, negating a sole-source bid from Boeing.  Boeing was awarded the newly designated VC-25 contract to build the replacement aircraft for the VC-137s and the rest is history.

In the end however, Seligman notes in her article that the Boeing had to absorb nearly $600 million in unforeseen costs before the first VC-25 was delivered and entered service, bringing that actual cost of each aircraft to approximately $425million each.  This figure doesn’t include the upgrades to the VC-25 fleet over the years after delivery.  Loh maintained in the article that every Presidential aircraft, every single part from the airframe to the rivets should have competitive bids to ensure the USAF (and the taxpayer) receives value for their money.

The C-10 never became Air Force One. It was a long shot from the beginning. With less space, just three engines, and a mixed public perception of the jet, the odds were not in McDonnell Douglas’ favor. It remains a unique footnote in aviation history, leaving many avgeeks to wonder what could have been after all these years
Posted by MrGarabaldi at 9:07 PM