Monday Music "Give it up By Kacey of K.C and the Sunshine Band

I figured it would scar the alphabet boys if they come busting in and hearing a song about people standing for their beliefs and willing to fight for them no matter the cost, Good Music  unlike that crap they listen to now.  What can I say, My humor is warped....just a bit. Next week will be "Shoot To Thrill" by AC/DC..How Appropriate, LOL,  Now that should really cause some psych evals., hehehe, some poor ATF guy trying to explain the attraction to his mother because he is imaging himself as The savior of the American way rather than working for an agency that have the initials of a convenience store.  Now because we ain't gonna answer that door.  They can kick it in and start "the Dance"    I am very unhappy that the various .gov agencies have been weaponized by Obunger and continued to this day by the alphabet agencies because they don't like people that ain't on the democrat plantation.  Well I kinda like my freedom and stuff and that is anathema to the deep state and their operatives. 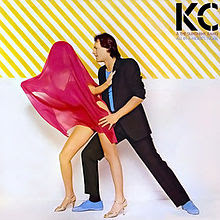 "Give It Up" was a hit song for KC and the Sunshine Band, although it was simply credited as KC in many countries, including the US. Following the backlash against many disco artists on the charts at the beginning of the 1980s, the song was a comeback hit for the act in the US, where it peaked at No. 18 on the Billboard Hot 100 in March 1984. The song had been an even bigger hit in the UK several months earlier, where it had hit No. 1 for three weeks in August 1983. It went on to become the 18th best-selling single of the year in the UK. It was the last of the act's hits in the US and UK, and the most successful of its 10 UK hits.

I used to catch the video on MTV and of course "Night Tracks" on NBC, I always thought the video and the song was cool and catchy and I always thought KC and the Sunshine Band was a neat band and they represented the 70's well and they were trying to get past the Disco backlash that was prevalent at the time.
Posted by MrGarabaldi at 1:00 AM