Several things going on, We had Fathers day recently and my son being a good kid that he is treated his Dad to club level Atlanta United tickets, I was surprised and touched that he did that and I asked him "Why?" and he looked kinda at his feet and said "Well this is your first Fathers Day without your Dad and I wanted to do something nice for you."  I was extremely touched, I have a good Son and I am proud of him and that a teenager had a bit of empathy was telling. 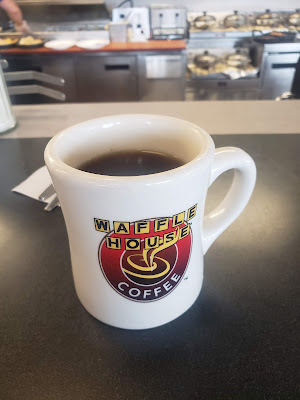 Our first stop was our usual stop, the Krasnovian Embassy of Waffles and Friendship. Then off to the Benz to watch the Game, 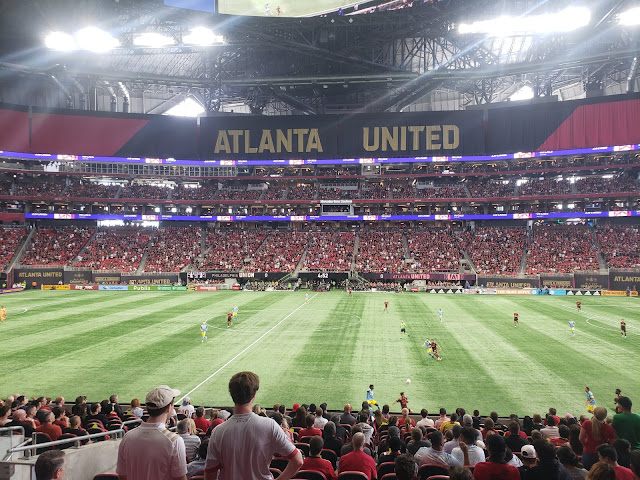 The seats were really good, but with people standing, you couldn't sit down so you were almost obligated to stand unless you wanted to watch the action on the Jumbotron. 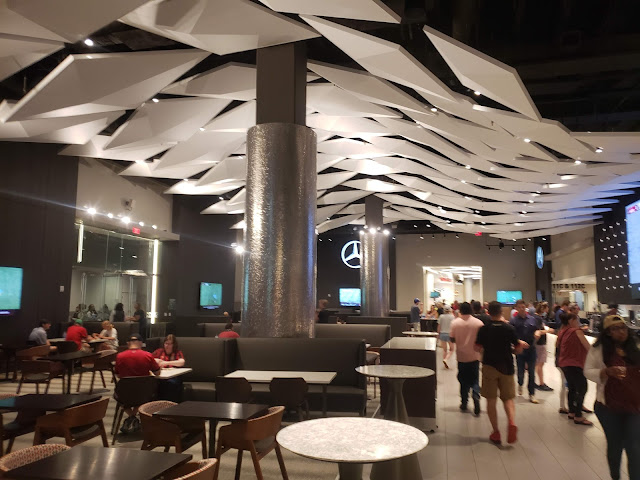 Then we went here to the club area to get food and drinks, no pushy crowds and the bathrooms were clean...I can see why people pay extra for club seats.  And while I was there I did buy a hat 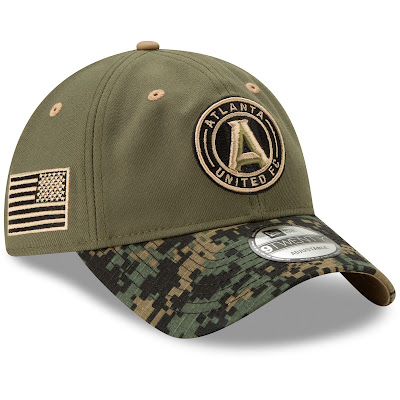 I needed something that goes with my "Lucky Shamrock" Atlanta United Scarf, that I wear to the games along with my Dutch Camouflage goretex jacket that was one of my souvenirs that I had collected during my time stationed in Germany.  It pays to lose over 120 pounds and I can wear stuff that I haven't worn on over 20 years. 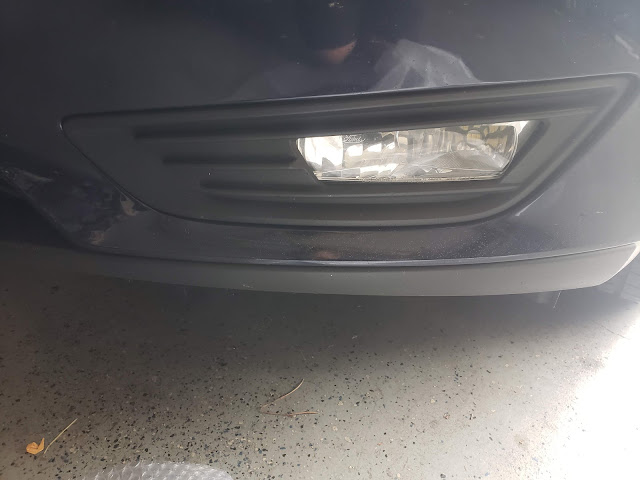 Now I had gotten a couple of things for the my Focus, First off, remember my Post I did changing my foglights from incandescent to LED, Well I did another mod on the car, I changed the foglight covers to the "basketweave" style.  That is what the European Focus Mark 3.5 uses.  The cars share a lot of components and styles, but there are some differences. 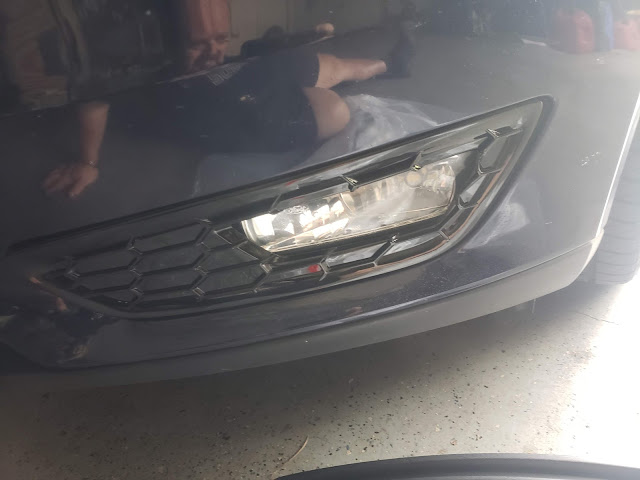 I also decided to work in my bonus room, that is the room that has all my books, Military souvenirs and other things in, I spent several hours putting stuff away, and squaring the room away so it looked decent again.  I have been meaning to do it for a long time and finally did it.   While I was doing it, I was playing my old cassette player from the traditional stereo that we GI's always buy from the PX playing music from the 80's CD's that I burned to cassette while I drove the Autobahn. 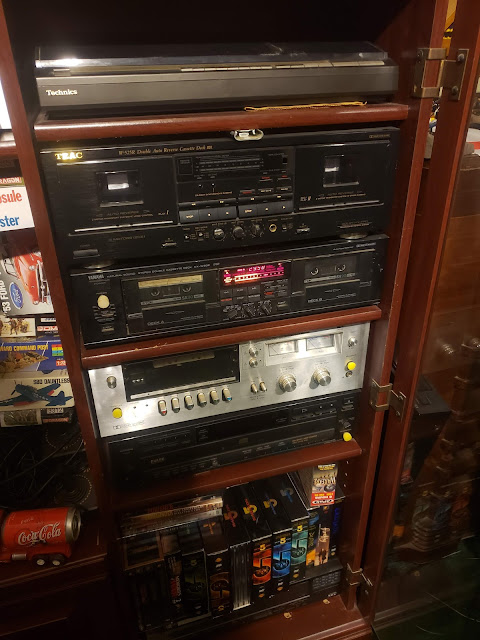 Well back to the Focus again, I had ordered a month prior LED high beams to replace the factory bulbs, and so I pulled out the owners manual... 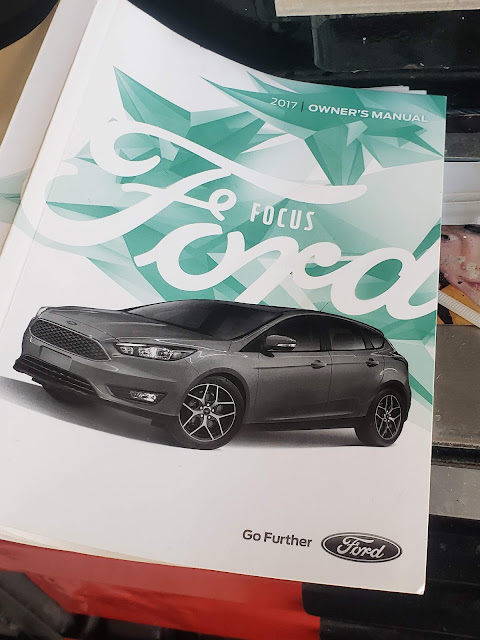 Then I turned on the headlights including the Highbeams, I wanted to make sure that they would work without my cranking up the car... 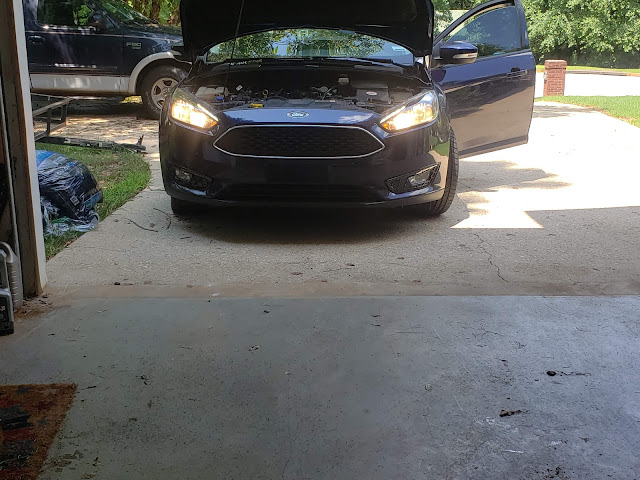 On my Truck and older vehicles, you can turn on the lights without any fuss, but the new cars like my Focus are more computer sensitive so I wanted to make sure. 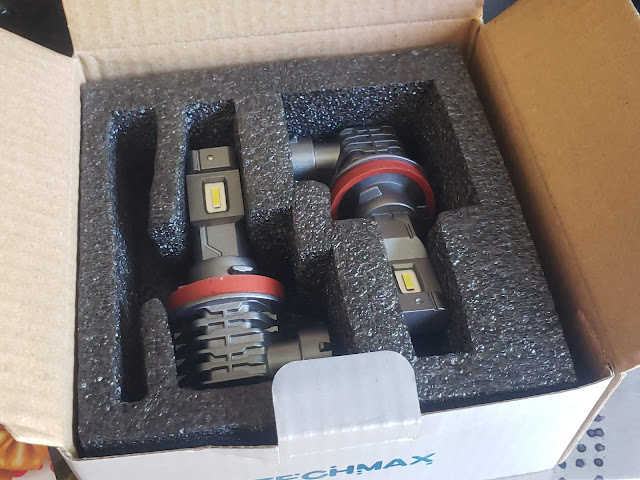 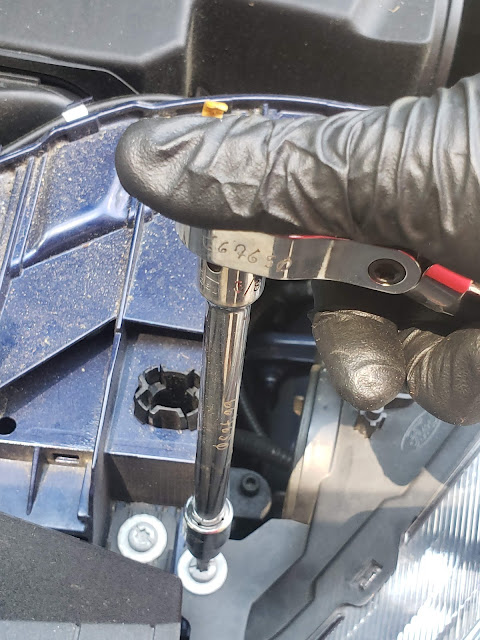 The Headlights assembly are held in place with 2 torx screws.  I started loosening the first one...As you can tell, I am wearing gloves, as per habit I wear gloves as to not leave a residue on the bulbs from my skin which will shorten the lifespan of the bulb. 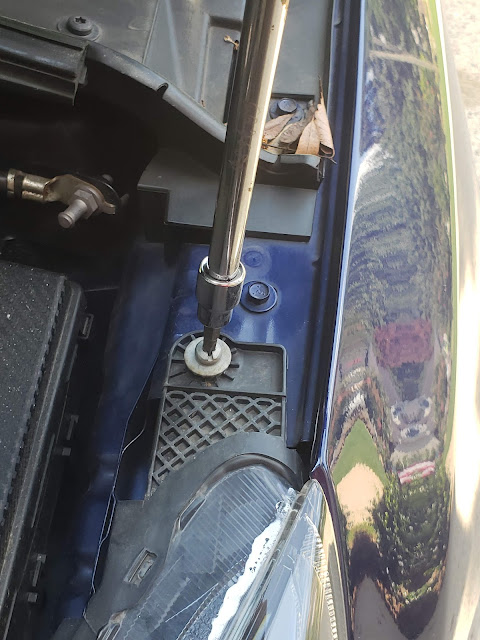 I then started loosening the second one...... 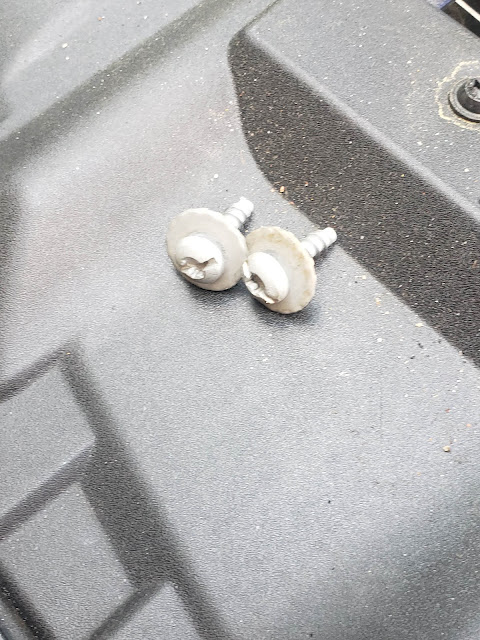 I then grouped the screws in a cubby on the fascia above the radiator as to not lose them. 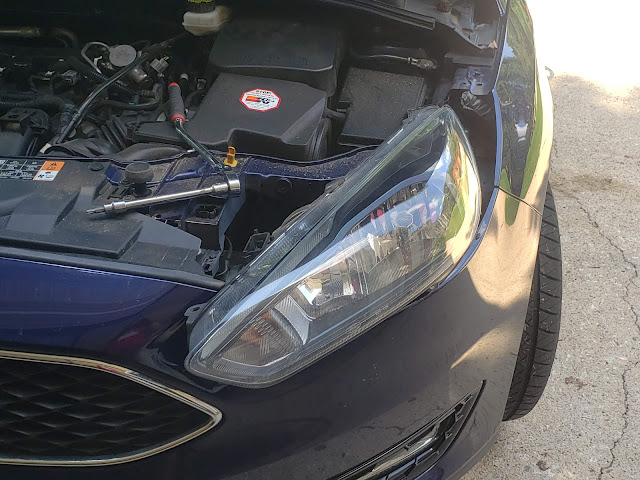 And slid the Headlight assembly forward, compared to earlier cars, this was easy.  I am glad I recall on some of the earlier cars, changing lightbulbs can be quite an endeavor. 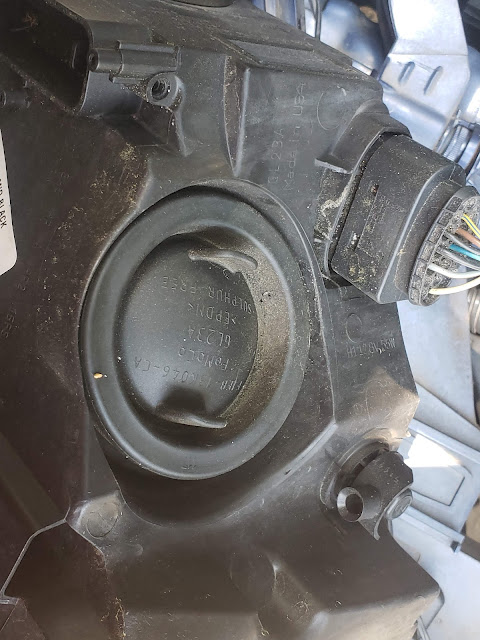 I immediately located the cover for the highbeam on the drivers side...opened it up.. 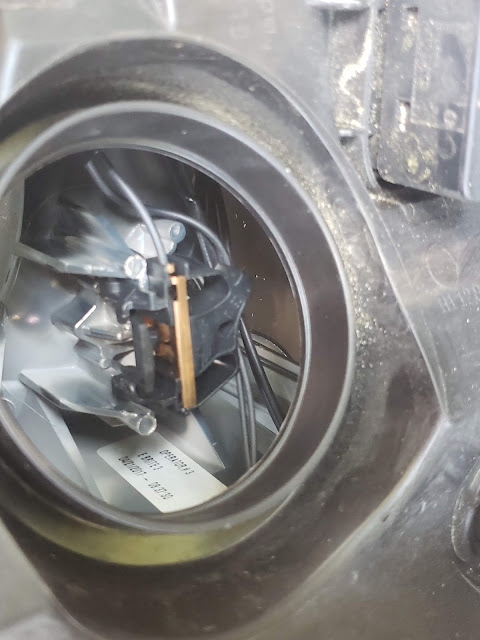 Ruh Roh Shaggy, it don't match the plug that I thought it would...so I fish the bulb out... 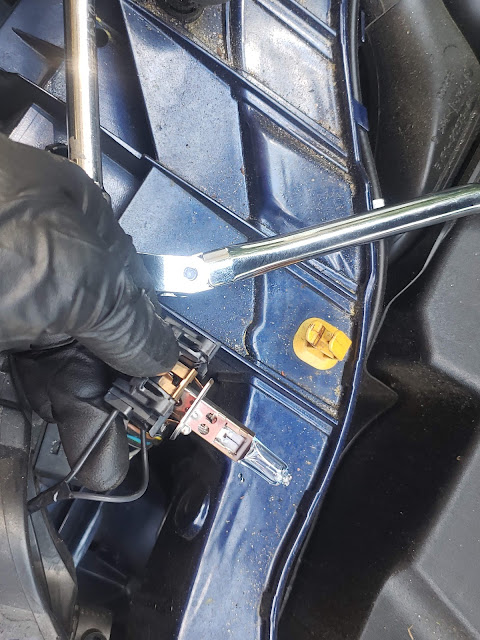 It don't match........crap....what did I mess up....  I did some digging and discovered that the LED bulbs I bought for my Highbeams will work for my "lowbeams"...Oh Well I changed my Lowbeams instead... 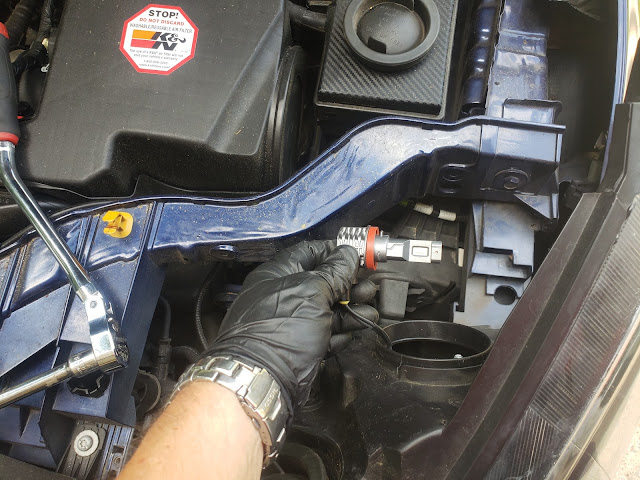 This is what it looked like plugged it, it is literally "Plug and Play". 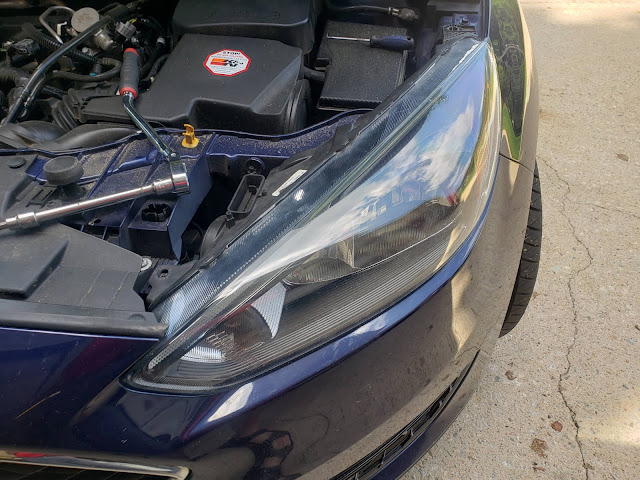 I put it back in place, and it slid in easily..So I walked around and turned it on... 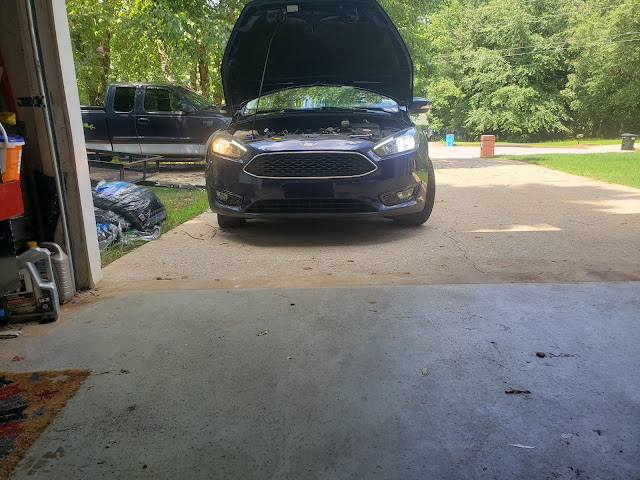 It works, you can see the difference between the bulbs. 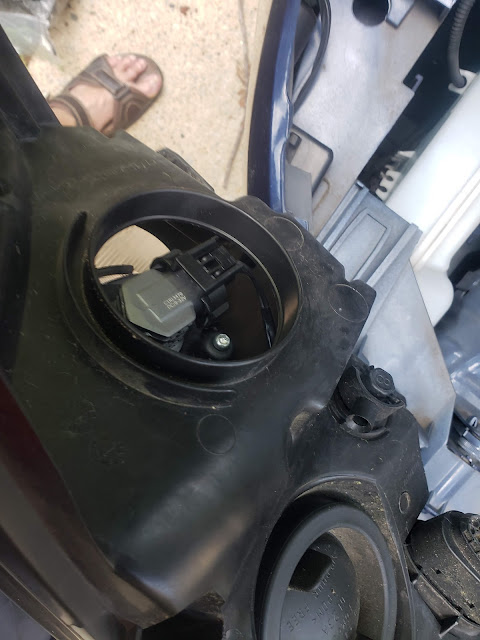 I went and repeated the process, this is what the light looks like inside the headlight assembly housing before I put the cover back on. 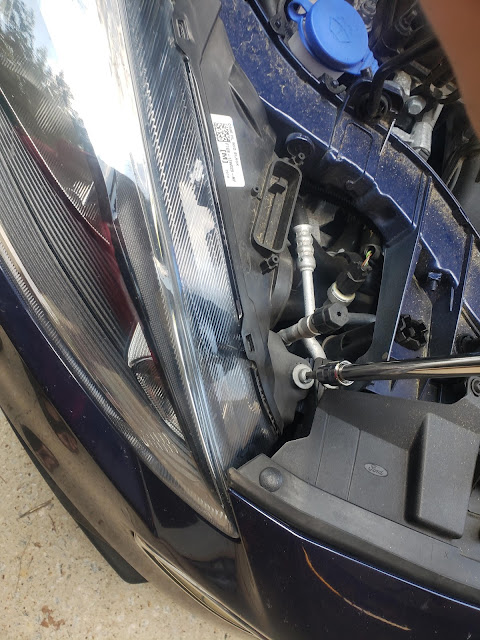 I repeat the process on the other side, this is my tightening the torx screws on the headlight housing. 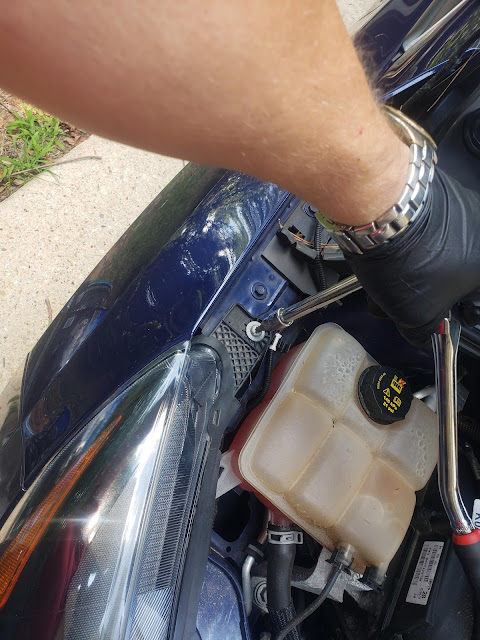 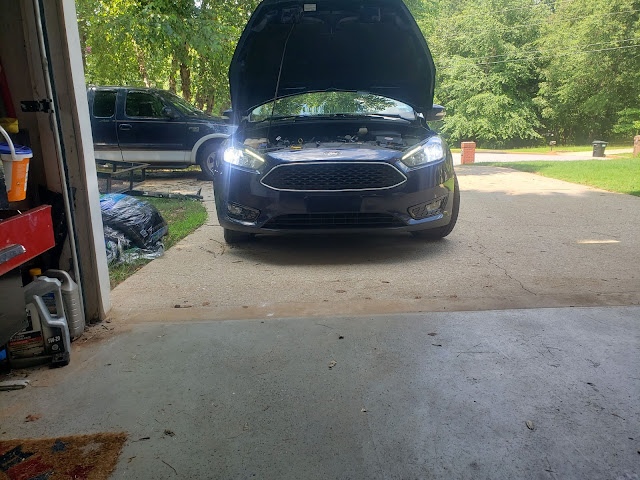 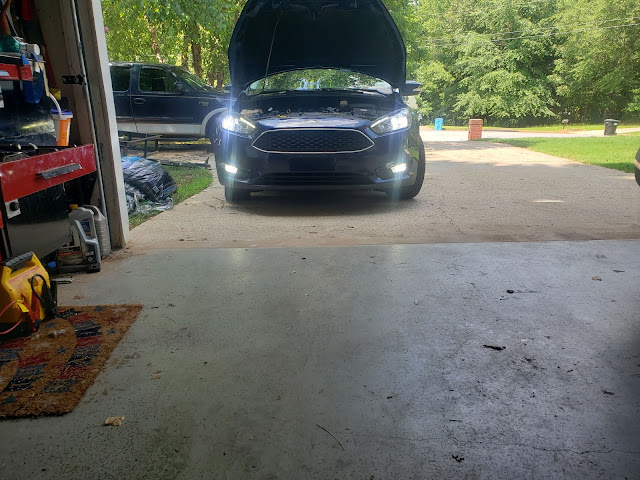 This is the pic of the car with the LED headlight and foglights....it was a cheap and easy mod on the car. 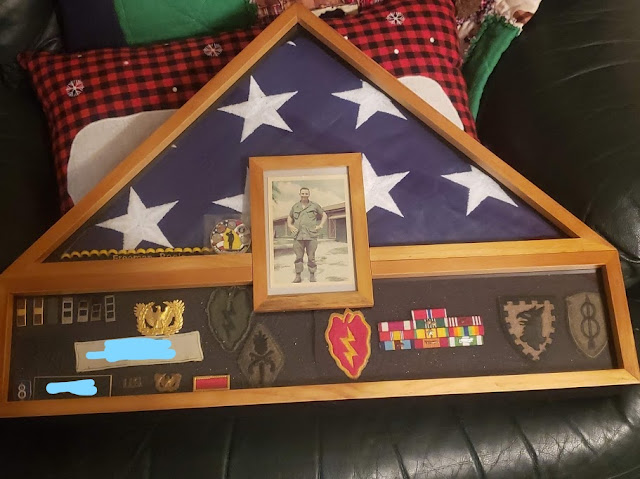 I had decided to build a shadowbox with the flag from my Dads memorial service, and I had put it together, and I had sent some pics to Old NFO for some ideas, and he made some really good suggestions and I incorporated them into it and it made it look really good, Thanks Jim.    I don't have all his unit patches, but I will eventually get them.  I had "squiggled" out the name for obvious reasons, I am very proud of my Dad, but I do prize my anonymity.