Give The Leftist Thugs All The Due Process They Can Handle

I pulled this off "Townhall",   I want to give the sleezebag all the "Due Process" because as much as I am angry at the bigoted piece of crap, he still has rights under our system, the same system that the left tries to deprive us our "rights" under.   I believe that the craphead suffered from, Allah, Snackbar Syndrome,  Black Nationalism, anger at the Rittonhouse verdict which I blame the media for, and don't even get me started on the mental gymnastics the legacy media is doing to avoid mentioning the guys name and race, now if he had been a white dude, the same media would have trumpeted that fact far and wide. 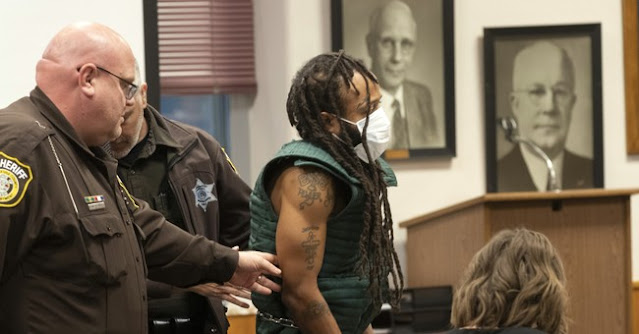 The loathsome anti-pallor rapper known as “Mathboi Fly” is accused of driving an SUV through a parade of pallor people in Wisconsin, and as conservatives we need to aggressively demand that he given every bit of due process he can take. Despite the media’s – if you pardon the expression – whitewash of what seems likely to be a racist vendetta spurred on by the garbage cesspool of Marxist/BLM/CRT lies he swam in, the evidence we have seen seems to point inextricably to this being a racial terror attack by a criminal degenerate.

Which is why is it so important, so transcendently vital, that we make sure this person gets every right due him as an accused.

We want him to have a terrific lawyer who will zealously seek to show that the state has not made its case (unlike the garbage public defenders of the January 6th defendants who appear eager to sacrifice their clients in order to own the Trump).

We want the prosecutor to turn over every scrap of evidence to the defense, especially potentially exculpatory evidence, in a timely fashion and without burying the most important stuff so defense counsel overlooks it. We want the prosecutor not hide witnesses, pull stunts like referring to the accused’s exercise of his right to remain silent, misstate the law, or alter video evidence.

We want a judge who will lambaste the prosecution if it lies or plays games.

We want a jury that will put aside its preconceived notions and look only at the evidence, apply the law, and come to a true and fair verdict.

If the atrocity that was the Kyle Rittenhouse persecution taught us anything it is the vital importance of due process when a significant portion of the population hates the accused. Look, I’m no fan of this Waukesha guy. The evidence I have seen looks damning. The presumption of innocence means the state must prove its case beyond a reasonable doubt; it does not mean that those of us not sitting in the jury box can’t come to our own conclusions (though even we need to be open to evidence that might undermine what we think we know). But we, the normal people who the establishment wants to get rid of due process in order to oppress, must be the most forceful advocates for it.

Part of it is self-preservation. Due process keeps the revolutionary justice fans of the left/media cabal from passing their bills of attainder upon us. Did you catch the fury of the haters over the fact that Kyle had a chance to make his case and have it considered by a panel of unbiased citizens instead of him just being hauled away and imprisoned because the consensus of the morons on MSNBCNN was they he was bad? The hallmark of revolutionary justice is that it is not about objective facts but about the narrative – they needed Kyle to be guilty because they could not afford to have normal citizens be allowed to defend themselves against their military wing of criminals and pedo perverts. Due process rejects any criteria except the facts and the evidence, and forces the government to prove individual cases as opposed to decree collective guilt. It is a bulwark – not the kind of Bulwark that involves invertebrate sissies but the kind that means a defense – against tyranny.

And defending due process is also morally right. It is essential for a free people to ensure that everyone gets a fair process to determine guilt. Look, if this degenerate – and his rap sheet shows that he qualifies for that title – is convicted, he is going away forever. The people of Wisconsin, for reasons I don’t understand, chose not to have mass murderers of kids and dancing grannies swing from a gibbet, but they will lock him in a cage permanently. That is a big ask by the government – to take away the freedom of a citizen forever. The government must prove the facts showing guilt beyond a reasonable doubt, and we must demand that the accused citizen get every chance to tell his side of the story.

Maybe he doesn’t have one. The evidence looks conclusive, but that is not the point. The point is that we conservatives must be absolutely and unequivocally militant about demanding that this man receive every bit of due process he is entitled to. Concepts like due process matter most when the accused is unpopular, just like free speech matters most when the speaker is an ass. That’s why it was so important decades ago, before it became another woke leftist scam devoted to protecting the Marxist narrative, for the ACLU to defend the Nazis marching in Skokie, Illinois. Everyone hates Illinois Nazis, and that’s the point. As a practical matter, you fight at the fringes, for the rights of the weirdos, losers, and mutations, because if you don’t fight for their rights, then you’re going to be fighting for your own rights.

So, let’s stand up for Mathboi Fly. Let’s stand up for his right to an attorney, to his right for the DA to be honest and forthright, to a judge who will guard his rights, and for a jury who will be unbiased and fair. Is he objectively guilty? Is Joe Biden senile? That makes no difference. There is one place the truth must come out – the courtroom, and we must make sure that it is done fairly and squarely. Because when we stand up for the likes of Mathboi Fly, we are really standing up for ourselves.