The Charge of the light Brigade

I was surfing my blogroll and Stormbringers blog had a positing about the charge of the light brigade.  I remembered reciting the poem to my 11 grade English class back in 1983.  I still know the words even now.  They speak of duty in the face of certain death.  They knew that their charge was suicidal, but they went anyway.   They went down in history and became immortal. 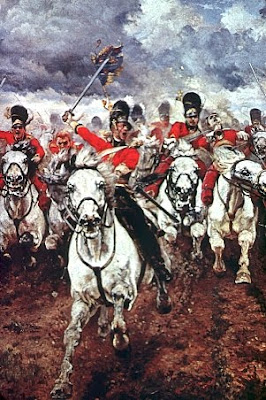 On this day in 1854 during the Battle of Balaclave, Major General the Earl of Cardigan led 600+ sabre-armed cavalrymen straight into the valley between the Fedyukhin Heights and the Causeway Heights, - famously dubbed the "Valley of Death" by the poet Tennyson - against several well-prepared Russian artillery batteries of over fifty guns with excellent fields of defensive fire. Although they reached the Russian lines under withering direct fire and scattering some of the gunners, the badly mauled brigade was forced to retreat immediately, producing no decisive gains and very high British casualties.

This action - the epitome of military disasters - was brought about by the poor written communication skills of Lord Raglan, overall commander, who intended to send the Light Brigade to pursue and harry a retreating Russian artillery battery near the front line, a task well suited to light cavalry. This in mind, Raglan issued the following order to Cardigan, by courier:

"Lord Raglan wishes the Cavalry to advance rapidly to the front, follow the enemy, and try to prevent the enemy carrying away the guns. Troop Horse Artillery may accompany. French Cavalry is on your left. Immediate." 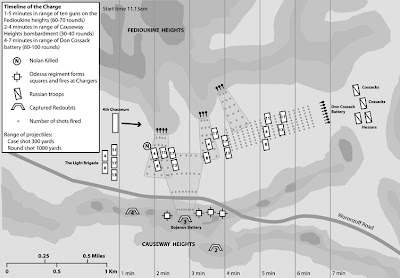 Timeline of the Charge - from Forgotten Heroes: The Charge of the Light Brigade (2007)

The charge was from left to right, with the Russian batteries at the extreme right.


The Light Brigade set off down the valley with Cardigan out in front leading the charge. Almost at once Nolan was seen to rush across the front, passing in front of Cardigan. It may be that he then realised the charge was aimed at the wrong target and was attempting to stop or turn the brigade, but he was killed by an artillery shell and the cavalry continued on its course.

Cardigan never looked back, did not see what was happening to the troops behind him. He reached the Russian guns, took part in the fight, and then returned alone up the valley without bothering to rally or even find out what had happened to the survivors. He afterwards said all he could think about was his rage against Captain Nolan, who he thought had tried to take over the leadership of the charge from him.

Despite withering fire from three sides that devastated their force on the ride, the Light Brigade was able to engage the Russian forces at the end of the valley and force them back from the redoubt, but it suffered heavy casualties and was soon forced to retire. The surviving Russian artillerymen returned to their guns and opened fire once again, with grape and canister, indiscriminately at the mêlée of friend and foe before them

Cardigan survived the battle. After riding back up the valley, he considered he had done all that he could and then, with considerable sang-froid, left the field and went on board his yacht in Balaclava harbour, where he ate a champagne dinner.

The Charge Of The Light Brigade
by Alfred, Lord Tennyson

Memorializing Events in the Battle of Balaclava, October 25, 1854

‘Forward, the Light Brigade!’
Was there a man dismay’d ?
Not tho’ the soldier knew
Some one had blunder’d:
Theirs not to make reply,
Theirs not to reason why,
Theirs but to do & die,
Into the valley of Death
Rode the six hundred. 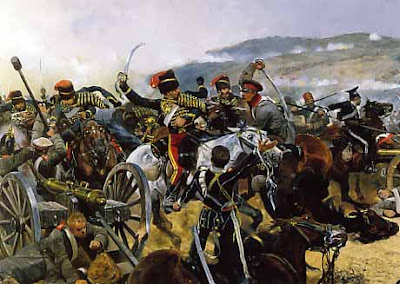 The 11th Hussars strike the Russian Battery with the 17th Lancers

Flash’d all their sabres bare,
Flash’d as they turn’d in air
Sabring the gunners there,
Charging an army while
All the world wonder’d:
Plunged in the battery-smoke
Right thro’ the line they broke;
Cossack & Russian
Reel’d from the sabre-stroke,
Shatter’d & sunder’d.
Then they rode back, but not
Not the six hundred. 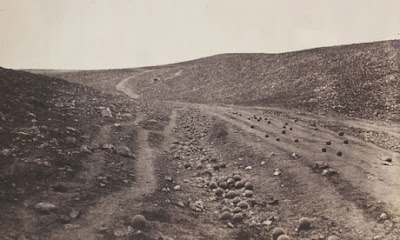 The Valley of Death, photographed some time after the Battle of Balaclava - cannonballs still litter the battlefield.


The Charge of the Light Brigade has also come to epitomize the valour of warriors in carrying out their orders, even in the face of certain destruction.