I was driving through the next municipality from where I live,  I actually was pulling out of a Chic-fil-a and I saw this car driving like the shriners do during a parade...basically was clueless and drove like it.  Well I go to the light to make a left turn on the main drag and this same car was in the left lane doing 25 miles an hour and weaving.   Well I got closer and saw the "Obama stickers" all over it and I muttered "No surprise there"  but I grabbed my phone and took a quick pic before the flow of traffic pushed me past this car being a speedbump on the road of progress.....I know...another analogy.....shoot me....  Well I passed this car and looked at the inhabitants, besides having a "cripple" placard on their rear view mirror, they were two very obese people in their 30's if that much, and both appeared to be texting.   I immediately thought of this:

After I passed this car, still noticing the weaving and lack of situational awareness, I saw them zip across several lanes of traffic and head to McDonalds.  I guess to spend some of that SSDI they get. 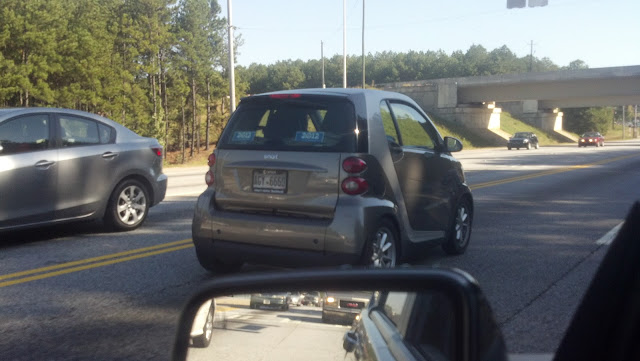 Posted by MrGarabaldi at 9:44 AM