I was trying to pick my brain for something to post,  I am sure that other bloggers have those moments where there is soo much you want to post about but there is a mental dis-connect between the brain and the fingers hovering over the keyboards.  I wanted to continue something with my Hitler and 2nd Amendment thingie that I have been running with and just had "vapor lock".  Well I also wanted to post about the "selfies" that the first Grifter was doing at the funeral of Nelson Mandela.
The recent budget deal that the wimp establishment republicans pushed through that basically kicked sequestration to the curb.  The GOP is afraid that they would get mauled in another budget showdown with the Democrats so they rolled over and let the Democrats steamroller them.  The Democrats I believe were hoping for a budget showdown to get the bad publicity of Obamacare off the news...for a while. 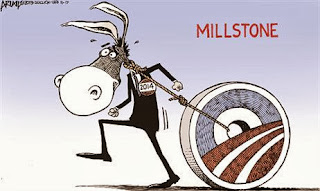 The Election year Democrats are running scared of this election year cycle, because they will have to answer for Obamacare that was passed strictly on a party line vote, there were no GOP votes..Even the RINO's stayed away from this.....Surprisingly.  They were hoping to force a budget fight to get the onus back on the GOP on the runup before the 2014 elections. 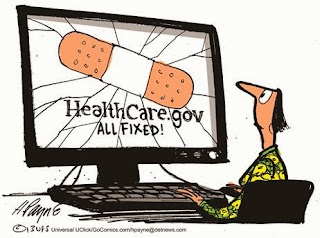 Speaking of Obunglercare...Here is a tidbit I got talking to another parent at my sons scout troop.  This person was talking about a  major software upgrade roll out they they are worried about and I commented " as long as your roll out works better than the Obamacare website roll-out , then y'all would be fine."    This person replied that " My company is the one that rolled out the ACA website."   *Oh Snap*   I thought.   I replied " You work for CGI Federal?"   This person nodded in the affirm, I without thinking immediately asked " What happened, was there any test of the system before the roll-out?"  This person replied " there was soo much bureaucratic interference in the program, all these people wanted their input into the product, but then wouldn't make a decision and punted it to another bureaucrat who then shuffled it to another one.  We had no guidance on exactly what they wanted...Just vague *suggestions*.  We were stumbling around trying to do what they asked.  There were no leadership or direction given.  We kept changing the codes, adding things and then removing things....per their many request, but no firm guidance. And they would not change the date of the rollout, political considerations"     I was thinking.*yep, the bureaucrat play...Duck and cover....Don't make a decision...you might be held responsible by those above you and get demoted.*    And people want the government to run your healthcare?

"Somebody picked the wrong girl."
You'd think the party that claims to support strong, independent women would love her. OK, no you wouldn't. Because they don't. The party in question loves a woman who knows where to go to get government benefits. A woman like this is doing it all wrong:

It's actually a lot more dramatic and intense than you might have expected. Every time she goes back to the couch (if you are wondering what she is watching, it is the "somebody picked the wrong diner" commercial by Glock and R.Lee Ermey) and sits down, only to hear that ominous knock on the door once again, you're really starting to get concerned that the perp might get in before she's armed and ready.
The first time I watched (spoiler if you haven't already hit play), I was actually expecting her to shoot him dead. Now that would have been attention-getting, but it is a commercial after all, and I don't suppose that's really the association Glock is looking for. It's about protecting yourself, not about killing someone. Granted, without the threat of the latter you can't really do the former, but I do think it's accurate that in the circumstances envisioned here, it would not be necessary to ever pull the trigger the vast majority of the time. The perp is either going to run or put his hands on his head and give up.
A lynchpin of the liberal argument against gun rights is that the average gun-toting citizen is more likely to get shot by his/her own gun than to use in successfully in self-protection. This ad really exposes the thinking that drives that argument. The left simply doesn't believe that a young woman like this could handle herself in the situation depicted. In their minds, there is no way she's pointing the gun at the door when the bad guy gets it open - poised and ready. And that goes for a 40-year-old dad looking to protect his family too. These dopes would just end up getting shot by their own gun, so they're better off not being allowed to own it in the first place. That's the argument. They are better off calling the Police and hope they get there in time.
I will say this: If I'm her, I'm not waiting until the third time I hear the noise to get the gun. The first time I might write it off as something harmless, but the second time I'm getting the Glock. Why does she wait so long? Just for the ad's dramatic effect?  That has been a complaint with all the scary movies that I see...When somebody goes looking for the *bump in the night* they go unarmed.   In the real world, Jason or Freddie would have ate either a few shots of 00 buck or some other form of projectiles.
Anyway, if that's the strongest criticism of the ad (and it would be mine), that's not an anti-gun control argument. It's an argument for getting that thing in your hands sooner.

And here is the "Somebody picked the Wrong Diner" video that a blurp was shown in the preceeding video.

Posted by MrGarabaldi at 7:15 AM