Well I figured I would run out a Christmas song for Monday Music and I always liked "little Drummer Boy with David Bowie and Bing Crosby.  To me this song plays well with their own music strength and is one of the best known and unusual duets in Music history...Think about it  Bing Crosby, the classic crooner and Ziggie Stardust.   Whodda thunk it?   But they played well together and  created in instant classic.  This song and one other are my favorite Christmas Songs.

The track was recorded on September 11, 1977 for Crosby's then-upcoming television special, Bing Crosby's Merrie Olde Christmas. The pair exchanged scripted dialogue about what they each do for their family Christmases, before singing "Little Drummer Boy" with a new counterpoint with original lyrics written for the special, "Peace on Earth".
Bowie's appearance has been described as a "surreal" event, undertaken at a time that he was "actively trying to normalise his career" He has since recalled that he only appeared on the show because "I just knew my mother liked him" Buz Kohan was not sure that Crosby knew who Bowie was, but Ian Fraser claimed, "I'm pretty sure he did. Bing was no idiot. If he didn't, his kids sure did."
According to co-writer Ian Fraser, Bowie balked at singing "Little Drummer Boy": "I hate this song. Is there something else I could sing?", Fraser recalls Bowie telling him. Fraser, along with songwriter Larry Grossman and the special's scriptwriter, Buz Kohan, then wrote "Peace on Earth" as a counterpoint to "Little Drummer Boy". Crosby performed "Little Drummer Boy", while Bowie sang the new tune "Peace on Earth", which they reportedly performed after less than an hour of rehearsal.
Crosby died on October 14, nearly five weeks after recording the special at Elstree Studios near London; in the U.S., the show aired just over a month later, on November 30, 1977, on CBS. In the United Kingdom, the special first aired on December 24, 1977 on ITV. 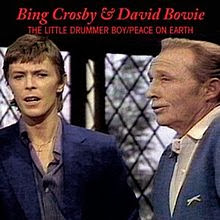 Posted by MrGarabaldi at 8:22 AM