I am working on a post involving the CCC or the Civilian Conservation Corp and it ain't done yet so I am posing this missive I ran across from "GOC" and I figured I would post it while I am working on another post.  The picture is one I ran across on the internet and save to my pic file that I add to any post that I run. 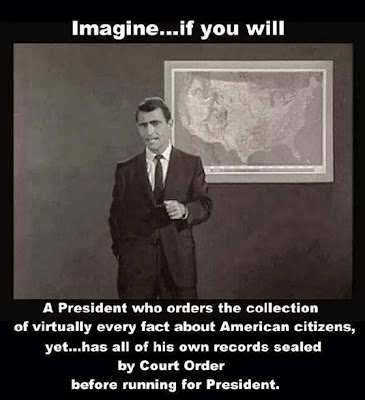 December 1960 was not a good time for the United States. Among the tragic events of that month were the New York Air Disaster, in which 136 people were killed when UA Flight 826 collided over Staten Island with TWA Flight 226, and the raging fire on the USS Constellation in the Brooklyn Navy Yard in which 50 were killed and 150 injured.
Of course bad things happen every month in a country as large as the United States. In fact, bad things happen every day, so many sometimes that we tend to forget about them in light of the next spectacular event.
One item that happened in December 1960, for example, attracted no attention, made no headlines, caused no animated conversation in the coffee shops and pubs across America. It was, in brief, the union of misdirected evil and misguided naïveté which resulted in the birth of a hybrid species on 4 August 1961.
Barack Hussein Obama, an abusive, alcoholic Kenyan agitator acting on orders from his master الشيطان (or Iblis in Arabic), planted the unholy seed of Ash-Shaytan in the womb of the clueless flower child Stanley Ann Dunham.
As the seed was not human, it did not contain the DNA imprint which would promote development of the routine human traits of morality, ethics, and personal accountability. And as the host was in the low-normal stratum of human potential, the zygote received only minimal-strength coding for a number of traits including purpose, self-discipline, and honesty.
After nine months of parasitic development, the embryo was ejected by the body of Dunham, who then began a pattern of rejecting and abandoning the monster she had co-created until her death 34 years later when she realized, too late, the profound catastrophe of which she had been an integral part.
As the mongrel grew, it was nourished by minions of the eternal Evil One, such as the mother’s completely deluded parents along with an even more delusional surrogate father named Frank Marshall Davis, who taught the misbegotten mistake the tricks of suspicion, anger, accusation, and whining to get what he wanted.
Later his education was completed by an embittered false prophet masquerading as a Christian minister, who taught him race-baiting and fact-skewing; a rabble-rousing domestic terrorist, who taught him how to become famous and wealthy by publishing manufactured stories with manipulated data and massaged dates; and total immersion in a well-established thugocracy, which taught him political extortion and ethnic intimidation.
No, December 1960 was not a good time for America. I was a lowly E-3 in the USN at the time and blissfully unaware of the destructive force being created in Paradise. As for those limousine liberalistas and ethnic loyalistas who elevated the hellish puppet to ultimate power, we told you so, you morons.
The lesson to be learned here is, of course, that naïve young girls who have been captivated by liberal-arts professors should not have sexual relationships with specimen from outside their own species.

Posted by MrGarabaldi at 1:52 PM

Email ThisBlogThis!Share to TwitterShare to FacebookShare to Pinterest
Labels: Truth in Humor