The creator of the G.I. Joe action figure has passed on.


I still have my GI-Joe doll that my parents got for me for Christmas, I got him in the early 1970's.  This one came out right after the "talking" one that my brother had.  I used to have the jeep, a bunch of rifles and many other things that an action figure needed to be bad-ass. Way better than Ken's pansy ass..well anyway.  I didn't have the astronaut version though.  I  had forgotten about him until about 10 years ago when my mom gave me a box of stuff and in it was my GI-Joe doll,  Still had the ripped up clothing that I had dressed him in all those years ago.  Well I went and on a lark went to a toy clearance house and picked up a uniform including an M60A3, so I reequipped him and parked him on top of my Babylon5 figurines I bought a long time ago from big lots of all places. And Yes that is the string for my Marlin Compound bow above him. 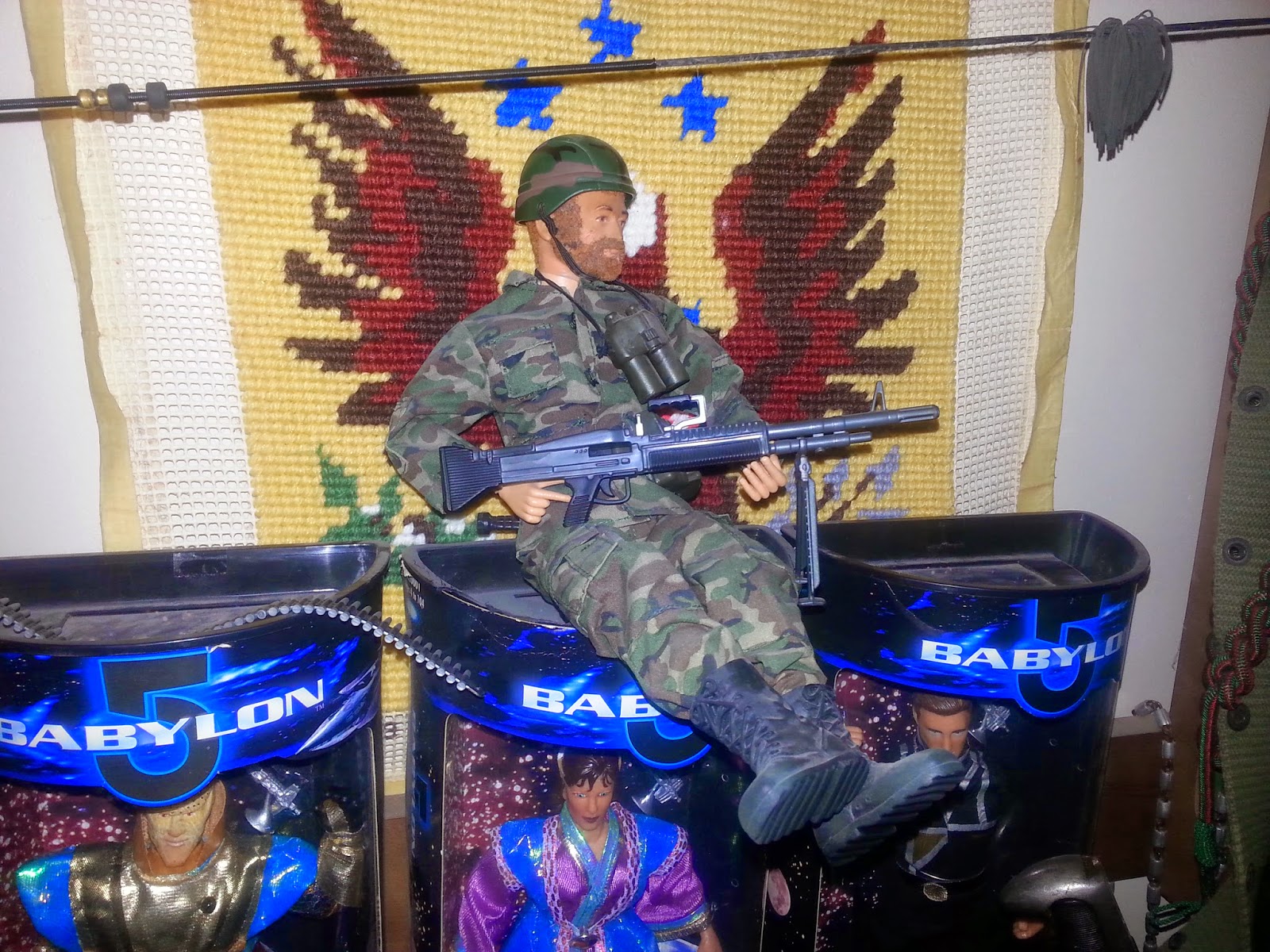 The GI-Joe has become the iconic toy for the average American male....not the sissified ones that inhabit PETA meetings or other leftist pursuits.


Donald Levine, the Hasbro executive credited as the father of G.I. Joe for developing the world's first action figure, has died. He was 86.
He died of cancer early Thursday at Home & Hospice Care of Rhode Island, said his wife, Nan. They were just about to celebrate their 60th wedding anniversary.
Levine shepherded the toy through design and development as Hasbro's head of research and development. He and his team came up with an 11½-inch articulated figure with 21 moving parts, and since the company's employees included many military veterans, it was decided to outfit the toy in the uniforms of the Army, Navy, Marines and Air Force, with such accessories as guns, helmets and vehicles.

+2
Creator: Don Levine holds up his original scuba diver G.I. Joe. He died today aged 86
Levine, who served in the Army in Korea, said he got the idea for the moveable figure as a way to honor veterans.
G.I. Joe hit the shelves in time for the 1964 Christmas shopping season and soon became a big seller at $4 apiece.
'Don Levine and his team took it from a good concept to a great concept,' said Alan Hassenfeld, Hasbro's former CEO whose father, Merrill, oversaw G.I. Joe's development when he ran the company. 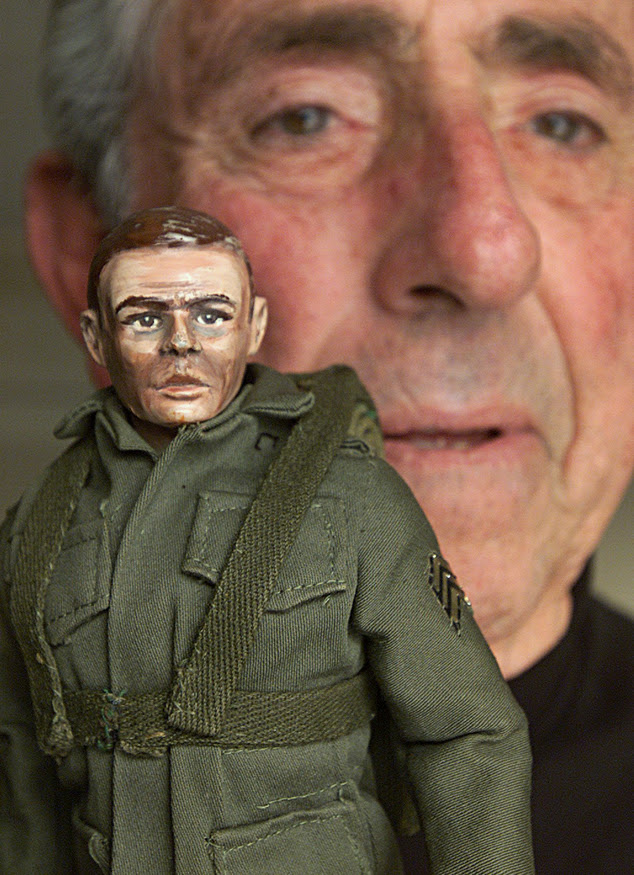 +2
Beloved: Don Levine was the mastermind behind hasbro's ever popular action figure
G.I. Joe remained popular until the late 1960s, as opposition to Vietnam intensified and parents shied away from military-related toys. Hasbro countered in 1970 by introducing "Adventure Team" G.I. Joes that played down the military connection. Into the '70s, G.I. Joes featured "lifelike hair" and "kung-fu grip" and were outfitted with scuba gear to save the oceans and explorer's clothing for discovering mummies.
Hasbro said in a statement that Levine's "influence on the toy industry was profound" as his team developed the concept of an action figure.
'His work forever changed the way kids play with toys, and in particular helped birth the G.I. Joe brand which has been a part of the American fabric for 50 years,' the company said.
Over the decades, G.I. Joe has spawned comic books, cartoons, two movies starring Channing Tatum, and a G.I. Joe Collector's Club and its annual convention — GIJoeCon — held in Dallas in April.
Levine's funeral will be held Sunday morning at Temple Beth-El in Providence. He is survived by his wife, three children and four grandchildren.

G.I. Joe has seen a lot of action over his 45 years. The soldier has been a toy, a comic book, a cartoon, another toy and several videogames. But on Aug. 7, G.I. Joe gets his most challenging mission yet: anchoring his own live-action film. G.I. Joe: The Rise of Cobra hopes it can emulate Transformers and turn nostalgia for the 1980s toys and cartoons into success at the box office.

(See pictures of ninja warriors: from myth to movies.)
While toy company Mattel could barely keep up with demand for its Barbie dolls in the early 1960s, its competitor, Hasbro, realized the market had no analogue for boys. In 1963, Hasbro began development on a military-themed line of dolls that, like Barbie, could be accessorized with different outfits and equipment. The original strategy called for a different figure for each branch of the military, but seizing on a 1945 film called The Story of G.I. Joe, the toys were eventually genericized. (The term itself comes from World War II, where it was used as a shorthand symbol for the typical serviceman, or "Government-Issue Joe.")

(See pictures of Barbie's 50th birthday.)
G.I. Joe was initially a massive success and Hasbro expanded the line throughout the '60s, reimagining Joe as an astronaut, a deep-sea diver and a Green Beret. But outcry over American involvement in Vietnam dampened enthusiasm for a camo-clad action figure, so Hasbro gave Joe an honorable discharge. It redesigned the toys and relaunched them in 1970 as Adventures of G.I. Joe: the figure received lifelike hair, moveable eyes and a "kung-fu" grip, enabling him to hold onto objects for the first time. But the changes proved to be a gimmick, taken even further by Hasbro with the development of a space-traveling "Super Joe" in 1976. The reception was lukewarm, and by 1978, Joe was retired from service entirely.

(Read a brief history of Scrabble.)
In 1982, Joe had an unlikely savior in Star Wars. The sci-fi flick and the collectables it spawned rekindled America's appetite for action figures, so Hasbro reintroduced a scaled-down line of G.I. Joes to try and capitalize on the trend. Instead of a single character, there was an entire battalion of G.I. Joes, each given signature weapons, backstories and code names like Scarlett and Snake Eyes. Joe also got a new enemy, Cobra —"a ruthless terrorist organization determined to rule the world," as described in the intro to the 1980s TV cartoon G.I. Joe: A Real American Hero. (Cobra operatives got action figures, too.) G.I. Joe was also made into video games for early Atari and Commodore game platforms and as a comic-book series published by Marvel from 1982 to 1994. This won't even be G.I. Joe's first film — the animated flick G.I. Joe: The Movie went straight to video in 1987.
Though the action figure's popularity peaked in the late 1980s, Joe has been around in some form ever since. In the early 1990s, Hasbro reintroduced a line of larger, 12-in. G.I. Joes, and in 2004, the classic 1964 figures were rereleased to capitalize on Baby Boomer nostalgia. Some of the original, '60s-vintage G.I. Joes have fetched sizable prices. A rare and ill-fated G.I. Nurse from 1967 — the earliest and least successful female G.I. Joe produced — went for more than $6,000 at auction. Some of the earliest, rarest figures attract a similar price tag.
But what's perhaps most unique about G.I. Joe is his staying power. In an era when toy companies completely overhaul their product lines every few years, G.I. Joe has managed to avoid another hiatus. G.I. Joe: The Rise of Cobra might not set any box-office records, but it's a fair bet the movie's namesake will still be a mainstay on toy-store shelves long after the movie is forgotten.