I am old enough that I remember "Disco", and I actually liked it...well most of it...some of it was really strange.  The "Studio 54" was endemic of the era along with the solid gold dancers on TV.  I was a young teenager when Disco exploded partly because of the movie "Saturday Night Fever" and other movies.  I used to listen to music when I was growing up, I always had music playing in the background and I still have a bunch of my "Ronco Records" that had a bunch of disco songs on it.  The early 70's was known for the "folk music" and I considered it boring and Disco was a total change up from it.  We went from " Me and you and a dog named Boo" to "Night on Disco Mountain".  I have this song on my mp3 collection, and whenever I hear it I think of the South park episode where Mr Garrison gets a nose job and the cartoonist use the likeness of "David Hasslehoff" from Knight rider fame.


"Shadow Dancing" is a disco song performed by English singer Andy Gibb that reached number one for seven weeks on the Billboard Hot 100 in 1978. The song was later sampled in the title track of Skrillex's 2010 debut EP, My Name Is Skrillex. Albhy Galuten (who also produced this song) arranged the song with Barry Gibb. 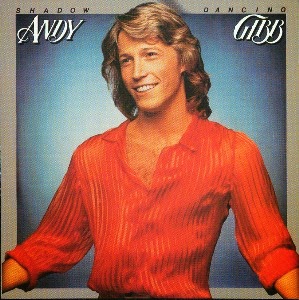 The song was written by Andy and his brothers (Barry, Maurice and Robin Gibb) of "BeeGee's" fame in Los Angeles, while the trio of brothers were working on the film Sgt. Pepper's Lonely Hearts Club Band. "And one night," Andy would recall, "while we were relaxing, we sat down and we had to start getting tracks together for the album" (also titled Shadow Dancing, which would eventually hit #7 on the U.S. album charts). "So we literally sat down and in ten minutes, we had a group going, (singing) the chorus part. As it says underneath the song, we all wrote it, the four of us." While Andy Gibb would have three more Top 10 hits in the U.S., this would be his final chart-topping hit in America.
According to Billboard's Book Of Number One Hits, Gibb became the first solo artist in the history of the U.S. pop charts to have his first three singles hit the number-one spot. Additionally, "Shadow Dancing" was listed by Billboard as being the number one single of 1978. In addition the song peaked at number eleven on the soul chart and sold 2.5 million copies in the United States alone.[4] Its two B-sides "Let It Be Me" appeared on US version and "Too Many Looks In Your Eyes" was from his previous album Flowing Rivers.


In July that year, Gibb performed "Shadow Dancing" at the Jai-Alai Fronton Studios in Miami, when Barry, Robin and Maurice unexpectedly joined him on stage, and sang this song with him. It was the first time that all four brothers performed together in concert.

And yes there is a Babylon5 episode called "Shadow Dancing" it is based on the ongoing "Shadow War"  This is a 3 minute clip from that episode.   Yes I couldn't resist....:)

Posted by MrGarabaldi at 7:00 PM