Today was a momentous day in American history, on this day 150 years ago, President Lincoln gave a 2 minute speech at the dedication of the Gettysburg battlefield where a little over 4 months earlier over a 3 day battle, the North was able to defeat the armies of the South.  At the beginning of the battle, this was the highpoint of the Southern Succession movement.  General Lee was hoping this incursion into the North would be successful.  In the past the Armies of northern Virginia has acted in a defensive nature, basically defending Richmond, the capital of the confederacy.
This was a strategic movement of the Southern armies, and the 3 day battle was a culmination of the movement.  General Lee was hopeful that this attack would force a defeat of the Union armies under George Meade on northern soil and this action would have the countries of England and France recognize the confederacy and force the United States to accept the confederacy.
Picketts Charge is widely recognized as the high-water mark of the Confederates fortunes. 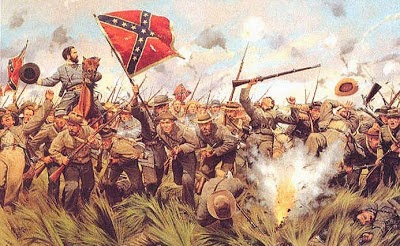 There would be 2 more years of war, and the Confederacy even after Gettysburg still could have prevailed.  President Lincoln was under enormous pressure especially with the mounting casualties from the war and the constant setbacks.  General Lee by this time had attained glorious reputation and his exploits were the stuff of  legends.   Many in the North lamented this and President Lincoln was under severe political pressure from the Copperheads to have a political settlement to the war.  President Lincoln feared that having 2 countries in the geographical area would make both weak and vulnerable to outside interference.  Remember the Monroe Doctrine, back then the countries in Europe were on a race to either colonize or spread their own influence through the world.  Look at the effect on Africa,  We had our own manifest destiny to go from sea to sea and having the French, Germans or English meddling would have caused problems with that.

Following the July 1–3, 1863, Battle of Gettysburg, reburial of Union soldiers from the Gettysburg Battlefield graves began on October 17. The committee for the November 19 Consecration of the National Cemetery at Gettysburg invited President Lincoln: "It is the desire that, after the Oration, you, as Chief Executive of the nation, formally set apart these grounds to their sacred use by a few appropriate remarks." Lincoln's address followed the oration by Edward Everett, who subsequently included a copy of the Gettysburg Address in his 1864 book about the event (Address of the Hon. Edward Everett At the Consecration of the National Cemetery At Gettysburg, 19th November 1863, with the Dedicatory Speech of President Lincoln, and the Other Exercises of the Occasion; Accompanied by An Account of the Origin of the Undertaking and of the Arrangement of the Cemetery Grounds, and by a Map of the Battle-field and a Plan of the Cemetery).
During the train trip from Washington, D.C., to Gettysburg on November 18, Lincoln remarked to John Hay that he felt weak. On the morning of November 19, Lincoln mentioned to John Nicolay that he was dizzy. In the railroad car the President rode with his secretary, John G. Nicolay, his assistant secretary, John Hay, the three members of his Cabinet who accompanied him, William Seward, John Usher and Montgomery Blair, several foreign officials and others. Hay noted that during the speech Lincoln's face had 'a ghastly color' and that he was 'sad, mournful, almost haggard.' After the speech, when Lincoln boarded the 6:30 pm train for Washington, D.C., he was feverish and weak, with a severe headache. A protracted illness followed, which included a vesicular rash and was diagnosed as a mild case of smallpox. It thus seems highly likely that Lincoln was in the prodromal period of smallpox when he delivered the Gettysburg address:  The following speech was short and is considered one of the best  political speeches in history.  Compare the brevity of Lincoln's speeches to the pontification of the speeches given in this day and age.


Four score and seven years ago our fathers brought forth on this continent a new nation, conceived in liberty, and dedicated to the proposition that all men are created equal. 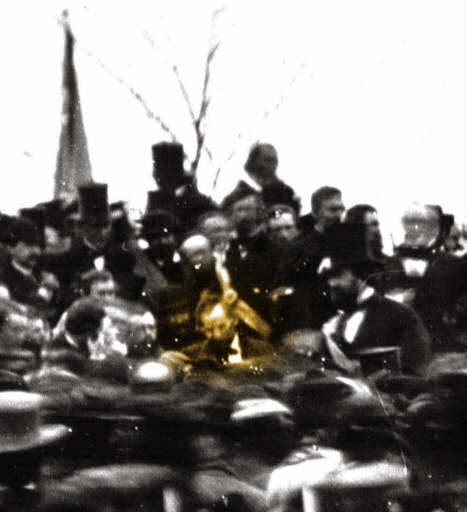 Now we are engaged in a great civil war, testing whether that nation, or any nation so conceived and so dedicated, can long endure. We are met on a great battlefield of that war. We have come to dedicate a portion of that field, as a final resting place for those who here gave their lives that that nation might live. It is altogether fitting and proper that we should do this. 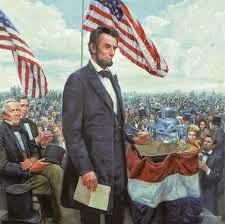 But, in a larger sense, we can not dedicate, we can not consecrate, we can not hallow this ground. The brave men, living and dead, who struggled here, have consecrated it, far above our poor power to add or detract. The world will little note, nor long remember what we say here, but it can never forget what they did here. It is for us the living, rather, to be dedicated here to the unfinished work which they who fought here have thus far so nobly advanced. It is rather for us to be here dedicated to the great task remaining before us-that from these honored dead we take increased devotion to that cause for which they gave the last full measure of devotion-that we here highly resolve that these dead shall not have died in vain-that this nation, under God, shall have a new birth of freedom - and that government of the people, by the people, for the people, shall not perish from the earth.


This is a poster I made back in the 8th grade.  I had spent a lot of time in "art" class, learning calligraphy and working on this poster.  I was very glad that my mom had saved this poster along with some of the other stuff from my childhood.  it is set up in my "man-cave" along with my military souvenirs and other stuff and assorted SWAG from work. Posted by MrGarabaldi at 7:44 PM