This post is in response to blog babe Momma Fargo who asked about the situation in Ferguson Missouri.  I saw her post and question while I was headed to work.  I didn't have time to answer it.  So I had all shift to think about her question...."Ferguson....What is next?"   Basically.  Momma Fargo wrote this post based partly on her experience as a Police Officer.  She is trying to figure out what is going to happen next and what might be the root cause of the issues.
I was going to post in her comment section but this would be a looong comment so I figured I would post it here to do it justice.   The Ferguson riots and standoff is in my mind a culmination of decades of racial grievances that have been allowed to fester and stew up under the surface. This is the chickens coming home to roost, This is the results of generations of cultural marxism and political correctness run amuck.
It is curious that blacks, the least educated thirteen percent of the population, the least productive, most criminal, and most dependent on governmental charity, should dominate national politics. Yet they do. Virtually everything revolves around what blacks want, demand, do, or can’t do. Their power seems without limit.
We as a culture absolutely cannot do anything to upset them,    Blacks now control the presidency and thus, most importantly, the Attorney Generalship. In this the staggering political power of blacks is most evident. Obama was elected because he was black: an equally unqualified and negligible white politician  would have had no chance. He is now fiercely pushing the most profound transformation of America ever attempted.  President Obama and his fellow travelers have split America along racial lines.  What is the purpose?   President Obama was supposed to be the post racial president, but instead he has fanned the flames of racial discourse.
We as Americans used to believe in our innate belief as Americans, that we have a common culture a common belief as the glue that holds our society together.  But now that we have split along racial and cultural lines, the belief that we as Americans can come together is fading fast.  The blacks are perpetually angry and demanding more, we have the hispanic groups demanding more, we have the islamic groups demanding more.  Everybody is angry and full of rage, I can see why in the past the blacks have a case for mistreatment for slavery and the Jim Crow laws, but this is the 21st century, anybody that was a slave here in America  have long returned to ash.  I can see the mistreatment of the blacks during the Jim Crow era.  But that went away in the 60's.  Now we have a new generation of blacks demanding special rules and exemptions from today's' society.  Where will it end....The rage is building and I see everybody else getting angry also, the whites are angry because they are tired of being blamed for all the ills in the world.  I am afraid that the differences are too much and the only to fix it is by fire.  Let the rage explode and consume all those that are ate up with the hatred.  Nothing else will do it.  I am almost advocating secession...the divide is almost too much for us as a people to surmount. 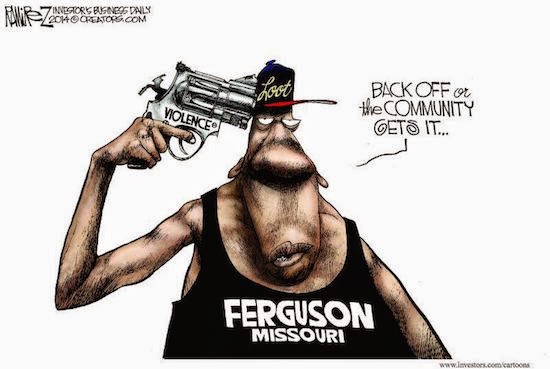 We have a coalition of groups that pushed for a "Rules of engagement " in the eve of the oncoming of the Grand Jury proceeding:


Proposed Rules of Engagement
1) The first priority shall be preservation of human life.
2) Channels of communication will be established so that situations can be de-escalated if necessary.
3) Police will give protesters 48 hour advance notice before grand jury decision is announced.
4) Police will provide to the public information that makes clear the chain of command, who is making what decisions and the processes for deciding when the police response will be escalated.
5) Every attempt should be made to communicate with protesters to reach "common sense" agreements based on these protocols, both ahead of time and at the scene of protests.
6) Clear standards of professionalism and sound community friendly-policing will be maintained and adhered to at all times.
7) Police will wear only the attire minimally required for their safety. Specialized riot gear will be avoided except as a last resort.
8) Crowd control equipment such as armored vehicles, rubber bullets, rifles and tear gas will not be used.
9) Police or other government authorities will not interfere with the free flow of information through tactics such as limiting cell or internet access, interception of cell or other mobile conversations or unwarranted wiretaps.
10) Every attempt will be made to pinpoint arrests so that only individual lawbreakers will be arrested. ”Kettling” and mass arrests will not be used.
11) Safe houses shall be considered sacred ground and only entered by police when called upon or if extremely necessary.
12) Media and Legal Observers shall not be considered participants in protests and shall be allowed to do their jobs freely.
13) Every attempt will be made to provide alternate routes or other means for non-involved persons to get to places of employment and meet other transportation necessities.
14) Strategically, police commanders will allow protests to take and occupy larger and more disruptive spaces than would normally be tolerated, and will allow occupation of those spaces for longer periods of time than would normally be tolerated.
15) Police will be instructed to be tolerant of more minor lawbreaking (such as thrown water bottles) when deciding whether to escalate the use of force.
16) Police rank and file will be instructed to provide every latitude to allow for free assembly and expression, treating protesters as citizens and not “enemy combatants.”
17) Excessive force and other forms of police misconduct will not be tolerated.
18) Intimidation and harassment of protesters will not be tolerated. This includes pretextual pedestrian or traffic stops, contacting of employers or family members, pre—emptive arrests or detention of "leaders," publishing of private information and any other means of intimidation and harassment.
19) Bond for arrestees will not be set above the levels which would be considered average over the last two years, and arrestees will not be held for periods longer than average lengths of time. Medical care will be liberally made available. Attorneys will be able to travel to and meet with clients without impediments.

Does anybody want to think of what this means...?  Basically, the Don't Shoot Coalition is asking the police - those tasked with maintaining the monopoly on violence to protect the law biding - to cede their authority to them, in essence granting them the ability to burn down the city without any threat of retaliation by law enforcement agencies.
I don't know what the future holds I am truly hopeful that I am wrong, but I see the shades of the Balkans in the fabric of our country and I believe that we will split.
Posted by MrGarabaldi at 3:42 PM