Monday Music "On the Loose" by SAGA

This edition of "Monday Music" almost didn't happen, my comments got overrun by spammers, I had 8 different kinds, I had to call in Arclight and Spectre and make it danger close.  I still am cleaning shrapnel and debris out of my perimeter......they really suck....

I figured it would scar the alphabet boys if they come busting in and hearing a song that is related good music in the 1980's unlike that crap they listen to now.  What can I say, My humor is warped....just a bit. Next week will be "Eternal Flame" by The Bangles,  Now that should really cause some psych evals., hehehe, some poor ATF guy trying to explain the attraction to his mother because an 80's all Girl band singing and crooning a slow song about an eternal flame..., ...but it IS  ATF people you know......

Saga got a lot of play on MTV and that is where I saw them for the first time and I really likes the song, to me it is a really good driving song, almost like "Golden Earring's " song I just had played a couple of weeks ago.  I hope Old NFO has heard of this one, lol

Originally known as Pockets, Saga formed in 1977 from the nucleus of Canadian rock band Fludd. In June 1978, they released their self-titled debut album Saga. A modest success in Canada, it would eventually sell over 30,000 copies in Germany as an import.
Their 1979 follow-up album Images at Twilight gave them their first charting single in Canada with the song "It's Time" peaking at No. 84 in the Canadian Charts. From the album, the songs "See Them Smile" and "Slow Motion" became strong radio favourites elsewhere. Saga's next album, Silent Knight was released in 1980, and included the singles "Don't Be Late" and "Careful Where You Step". 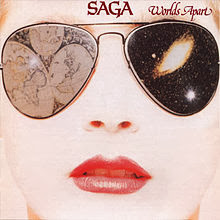 In 1981, the band's fourth album Worlds Apart was released. The lead single "Wind Him Up", finally broke them into the Top 40, peaking at No. 22 on the Canadian Charts in January 1982. A second single, "On the Loose", also fared well with the help of its music video receiving heavy rotation on MTV, and in December 1982, proved to be their breakthrough in America where it peaked at No. 26 on the Billboard chart in March 1983. "Wind Him Up" became the second single in America, peaking at No. 64 on Billboard the following month. Eventually, Worlds Apart was certified Gold in the US in 1983. The band opened for Jethro Tull on their North American tour in 1982.
Following on the success of Worlds Apart, the band won the 1982 Juno Award for "Most Promising Group of the Year."
A fifth album Heads or Tales was released in late 1983 and became another success. The lead single "The Flyer" fared well in Canada and also became their final U.S. hit, peaking at No. 79 on Billboard in November 1983. The follow-up single entitled "Scratching the Surface" became popular in Canada, peaking at No. 45 in April 1984.
Their sixth album, Behaviour, was released in 1985 and included the singles, "Listen to Your Heart" and "What Do I Know?" (charted No. 57 in Canada).

Widely considered Saga's best album (and certainly their most commercially successful), the album has become the band's most recognizable work to date. The first song on the album, "On the Loose" was a single that hit #26 on the Billboard Hot 100 and #3 on Hot Mainstream Rock Tracks in 1981, landing Saga their best chart performance. The single was helped with a music video which appeared on MTV during the station's inaugural year on the air. Videos were also made for the singles "Wind Him Up" and "Amnesia". The success of the album was also largely credited to an expanded tour roster which saw the band enter new territories and venues, particularly in the United States, to expand their musical presence. Worlds Apart has been certified Platinum in Canada and Gold in Germany, Denmark, the United States and Norway.