How to Survive and Prevent a Carjacking

With the stupidity going on for the past few months with mobs of leftist idiots attacking cars and passengers this primer would be some good advice for us motorists.  I shamelessly clipped this article from "Art of Manliness" 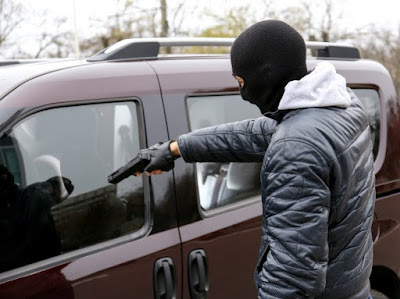 You’re sitting in your car at an intersection listening to the 80's on Sirius XM. Suddenly your door swings open and a gun is shoved in your face.
“Out of the car!” a voice yells.
You’re getting carjacked.
While rare, carjackings have been on the rise in recent years in cities across the United States (more on why in a bit). So it pays to have a plan for how to avoid becoming the victim of this crime, and what to do if you can’t.
To put together both prongs of said plan, I researched this area of tactical know-how, including talking with my buddy Mike Seeklander, owner of the American Warrior Society and a self-protection and tactical training expert, and share key insights on preventing and dealing with carjackings below.
Before I started researching this article, I thought carjackings were mostly a trope from 1970s action movies. The news didn’t seem to cover many reports on this crime.

But statistics indicate that carjackings have actually been on the rise in many U.S. cities for the past decade. Chicago, Memphis, Nashville, Baltimore, and New Orleans are just some of the cities that have reported a dramatic increase in carjackings in recent years.
Criminologists have a theory as to why the prevalence of carjackings has been going up: Cars today are simply harder to steal without a driver already at the wheel. The fact that modern cars come equipped with anti-theft technology, and will only start when a keyfob is in the vehicle, has made stealing parked cars much more difficult, time-consuming, and dangerous for would-be thieves than it was in the days of simple hot-wiring. So instead of stealing parked, unoccupied vehicles, criminals are taking already running cars from drivers at gunpoint. It’s a lot faster and easier than stealing a car the old-fashioned way.
So carjackings are up. What can you do to prevent yourself from becoming a victim of this crime?
Step one is to educate yourself about the world of carjacking. You need to know where carjackings are most likely to occur and how they typically go down so that you can formulate a plan on how to avoid this situation in the first place. So here’s your dossier on the criminal world of carjacking:

Below we discuss how to counteract the factors that make someone more vulnerable to this crime, in order to make yourself far less so.
Maintain situational awareness. We’ve written extensively about situational awareness here. The key points are 1) paying attention to your surroundings (get off your phone!), 2) look for anomalies in your environment, and 3) have a plan for if something goes wrong.
Situational awareness doesn’t mean being paranoid, just staying in a state of calm attentiveness. 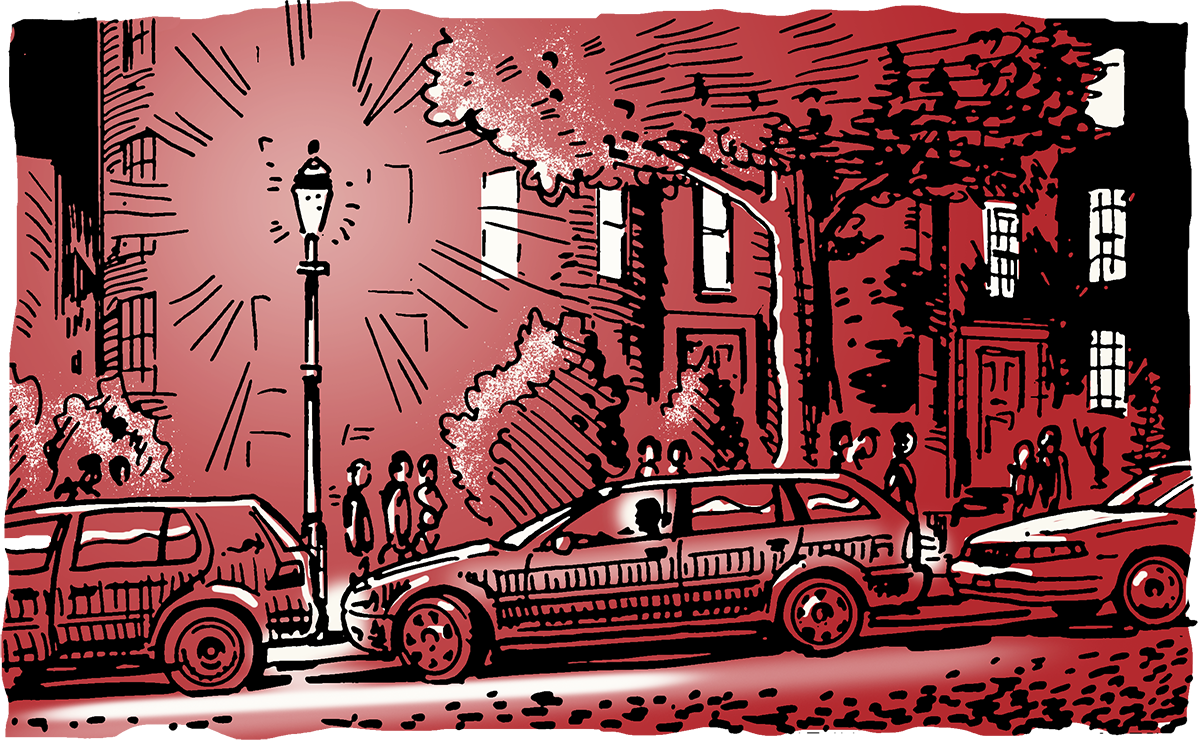 Park in well-lit and well-populated areas. As mentioned above, carjackings are crimes of opportunity. Carjackers will steal a car if they think they’re more likely to get away with it, and they’re more likely to get away with it, if there’s no one around and it’s dark. Don’t give carjackers the opportunity. Park your car in well-lit and well-populated areas. Avoid parking next to big vans or other objects that will obscure the view of witnesses. The goal is to park in a place where lots of people can see you, and your own visibility is high.
Get in and out of your car with purpose. Carjackers typically prey on drivers that appear weak or are distracted. So don’t look weak or distracted. Get in and out of your car with purpose. When you’re walking to your car, keep your head on a swivel. Before you get in the car, look inside it—scanning both the front and back seats. As soon as you climb in the driver’s seat, lock the doors, and get moving. Don’t fiddle on your phone or the radio. Same goes for when you’re getting out of the car. As soon as you stop, get out, and get moving to your destination. The more time you sit in your car looking at your phone, the more time you give a carjacker to stick you up.

Keep your doors locked, and your windows rolled up. Your goal is to make it as hard as possible for someone to carjack you. Leaving your doors unlocked and windows down makes you an easy victim. As soon as you get into your car, make it a habit to lock the doors. And as great as it would be to roll the windows down on a beautiful spring day and crank up “Santeria” by Sublime while sipping a Surge, keep your windows rolled up in high-crime areas of town. You don’t want to provide easy access to thieves.
Many new cars have a feature that locks the doors automatically when you start the car. Mike recommends turning that feature on so that you don’t have to think about locking your doors when you get in your vehicle.
Don’t travel solo when driving in a dangerous part of town. 92% of carjacking victims were alone in their car at the time of the crime. While it’s not possible to have a buddy with you every time you get in the car, if you know you’ll be driving in a dangerous part of town, take a co-pilot along. Again, carjackers are criminals of opportunity: if you’ve got a friend with you, it means the carjacker is likely outnumbered, diminishing his chances of success, and making him think twice about targeting your vehicle. 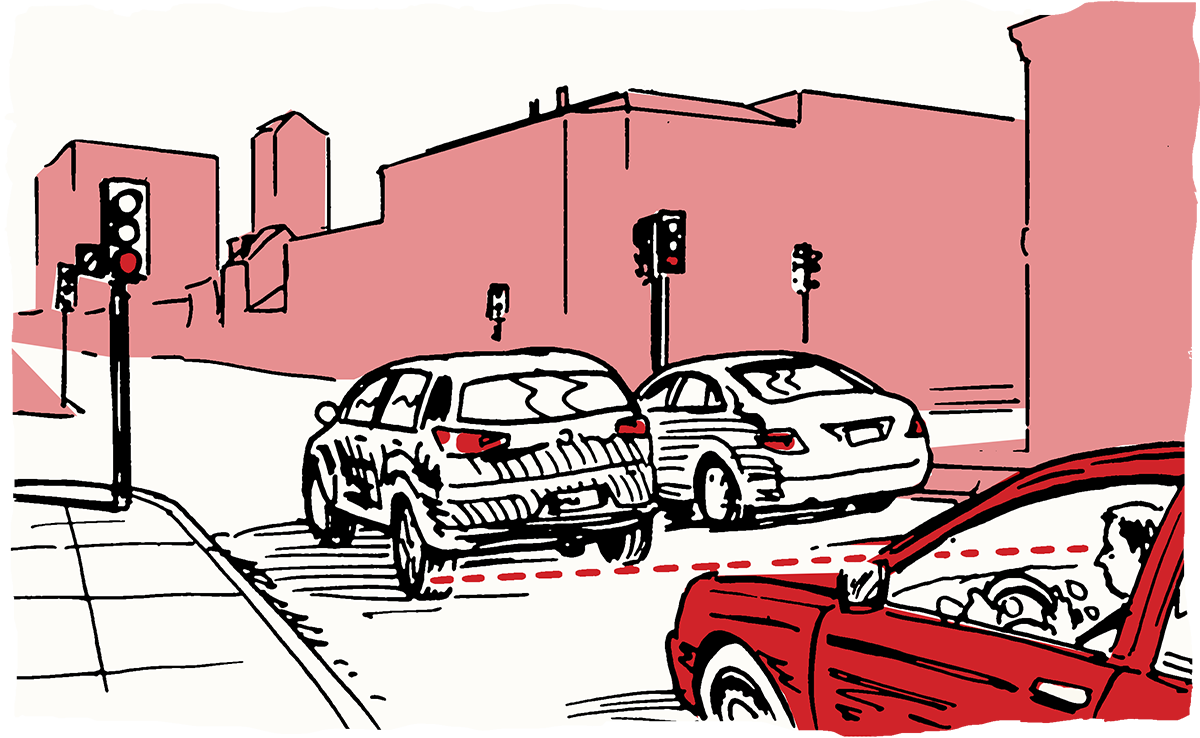 When stopped in your vehicle (like at a stoplight), be sure you can see the tires of the car in front of you. This will put enough space between you and the car in front of you to allow you to steer and drive away if some bad dude tries to jack your car. “Also, have a plan every time you’re at a stop light. If you had to drive away, have an idea of where you’d go,” says Mike. “[And] don’t be afraid to ignore sidewalks and traffic lines or hit a traffic sign. In a life or death situation, all surfaces become drivable.”

Be on the Lookout for Bump and Runs 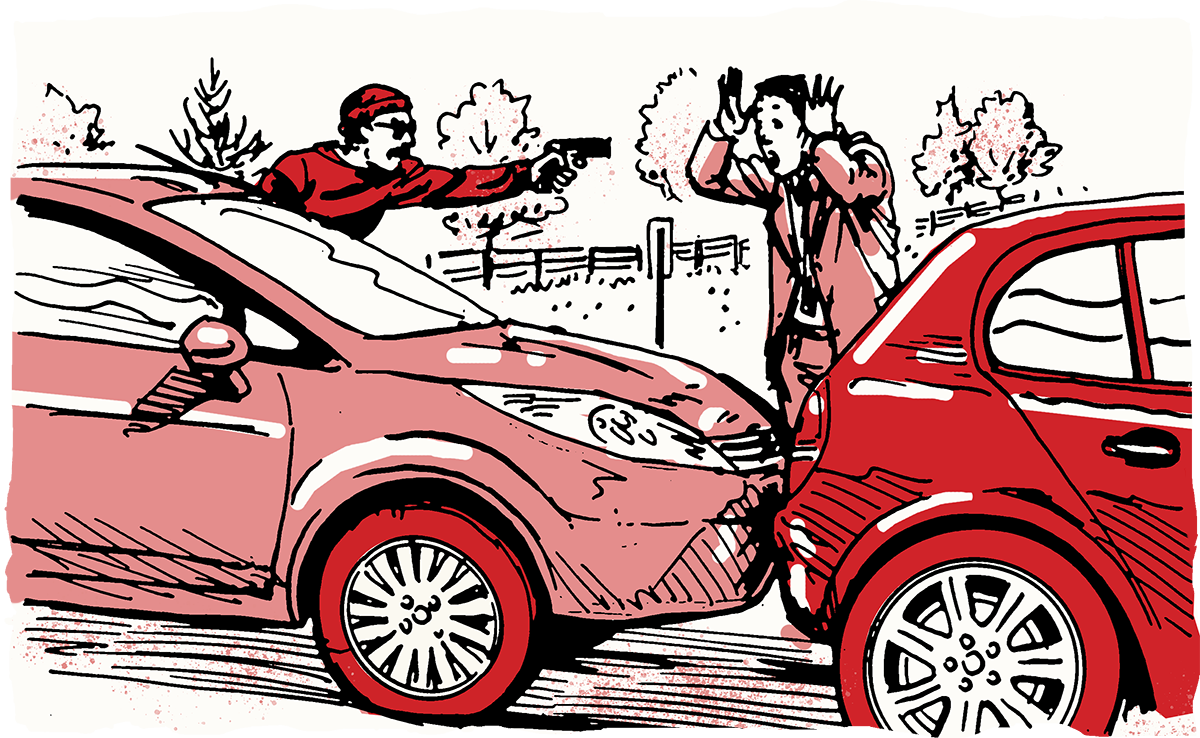 One underhanded tactic that some criminals use to carjack is called the “bump and run.” The carjacker and an accomplice will intentionally bump their vehicle into the rear of the victim’s car. Thinking he’s been involved in a fender bender, the victim will get out of his car to assess the damage and exchange insurance information. That’s when the carjacker will threaten the victim and steal his car. The carjacker zooms away in your vehicle, his accomplice drives away in his, and the victim is left stranded.
If you do get rear-ended, pull your car over into a well-lit and populated area. You want as many people as you can to see you. If there isn’t a good place to pull over, keep driving (with your flashers on, so if the person who bumped you is an average citizen, they know you’ll be stopping) until you find one. If you suspect the bumper is likely a car thief, call the police, and stay in your car with doors locked and windows rolled up until the police arrive.

Despite all the precautions you’ve taken, you’ve got some rando pointing a gun at your head and telling you to get out of the car. What do you do?
Just give them your car. Most carjackers just want your car. So give it to them. Your life is more important than your Honda Civic. Cars are replaceable; you aren’t.
Get kids out of the car first. If you have kids in the car, make sure the kids get out before you do. “Don’t let some bad guy get behind the wheel of the car if your kids are still in the car. Just tell the carjacker that they can take the car, but that your kids have to get out first,” says Mike. If the kids are old enough to get out by themselves, tell them to get out and as far away from the car and the criminal as possible. If they can’t get out of the car by themselves (e.g., a toddler or an infant), turn around to the backseat and get them out. Again, children should never be in the car without you.
Do NOT get in the car with them. If your carjacker tells you to move over and stay in the car with them, or demands that you get back in after he’s taken over the driver’s seat, do whatever is needed to avoid complying. Your attacker is likely taking you to a “second crime scene.” You don’t want to go to a second crime scene. These are places that are entirely hidden from public view where violent criminals kill/rape/beat their victims. Crime studies show that a victim’s chances of survival go down once they get to a second crime scene. So if you’re told to get into/stay in a carjacked vehicle, fight to resist like your life depends on it — because it probably does.

Control whatever weapon your attacker is using and unleash violence on them. Mike recommends keeping a pepper gel or foam as a first line of defense. “You want to avoid a pepper spray because it could mist back on you. You want something that shoots directly on the criminal and stays on them,” he explains.
Use improvised weapons. Gouge eyes, stomp feet, knee nuts.
If you’re armed, Mike recommends practicing how to handle your firearm in your vehicle. “Handling a firearm in a closed environment like a car seat poses some challenges,” he says. “You’ll need to practice how to get access to your firearm and how to aim and fire it. You’ll also need to practice how to manage your firearm if you have passengers in your vehicle so that they don’t get injured. They need to know what to do in the event you have to use a gun in your vehicle. And this takes practice.”
Many firearm training centers offer classes on how to handle a firearm in a car. If you carry a weapon, Mike recommends taking a class. Also, just practice with a “red gun” or other type of training gun.
If your defenses fail and the carjacker puts you into the trunk, you know how to get out.
As mentioned above, carjackings are rare but rising. Using some common-sense rules, you can avoid being a victim. But if you do get carjacked, you’ll know how to handle it.
Posted by MrGarabaldi at 6:00 AM

Email ThisBlogThis!Share to TwitterShare to FacebookShare to Pinterest
Labels: Art of Manliness