U.S Army Uniform goes to the traditional "Pinks and Greens"

I wish they had this style uniform when I was in the service, rather than what I had issued when I was in.  We called what we had "The Bus Driver Uniform".

Look kinda like that.....
If we really wanted to look good, we had to buy the "Dress Blues" and to really make it pop. get the belt with it.  We were issued "the Garrison cap", and I never cared for it and I purchased a "Service" cap 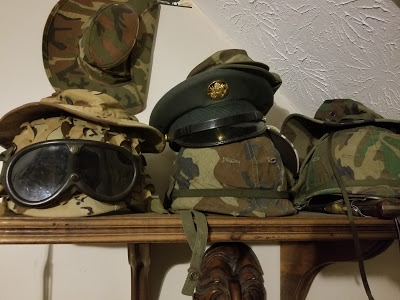 My Service Hat on top of the Center Helmet

and it was an acceptable option under regulations and I had a copy of the regulations in case while I was wearing it someone tried to give me crap about wearing it(Yes it did happen twice) and I put the copy of the regulation inside of the service cap.  I did spend the extra money to get the better quality cloth from clothing sales than what was issued to me when I was in basic, it was a little darker in color and better weave and when I went in front of the Soldier of the month boards for promotions and stuff like that, it helped me look sharp. When promotions points are high in your MOS, you do what you can do to get what you can get the extra recognition to help your career.   It is nice to see the military services going back to the traditional uniforms of our past.  Tradition is important to a military organization, it reminds us of our past, of what the unit has done, of it past glories and of what is capable of and the standards that it has set so the soldiers will strive to meed the goals of the unit, especially during "the suck" it will let them dig way down and embrace the standard because others have already have already done it and they don't want to let their unit down, it is "esprit de corp" and it will let a group of people do the impossible if necessary.

The US Army uniform is getting a ‘glow-up’ it has been confirmed, with the new duds looking rather like the old WWII ‘pinks and greens’, but with a modern flavor.
The Army has made no secret of the fact that the new issue uniform is based on what grampa was wearing back in ’45 and expects it to be standard issue to all new soldiers enrolled in 2021.
US Army Product Manager, Lt. Col. Jonathan Allen, said the new uniform was a response to the fact that the current options available to the military were not suited for ‘everyday business environments’, and that the army was keen to set, ‘a more appropriate standard for professionalism in an office setting.’
Beginning in January 2021, soldiers completing basic training will receive the new pinkish-brown trousers and olive-green jackets. Before then the new look will be rolled out to recruiters and drill sergeants in October this year.
It is being sold as a cost-neutral change which will have no impact on US taxpayers and will not hit enlisted soldiers in the pocketbook either.
850 of the new service green uniforms have been distributed to senior leadership, the Army Band and others for their comments on the new style/old style uniform

Sergeant Major Daniel Dailey told reporters that the US Army had been cautioned against referring to their new dress uniforms as ‘pinks and greens’. ‘We’re calling them Army Greens,’ he said, ‘pinks and greens is a World War II nickname.’
The new Army Greens are expected to be adopted by all 1.1 Million soldiers within the next eight years, which might seem like a long time, but to get from recruiters to the National Guard and Army Reserve Dailey said would take time.
‘We also have to give soldiers time,’ said Dailey, ‘to receive that money in their clothing allowances so they can pay for that uniform prior to it being required.’
In the meantime, the Army Service Uniform, the blue ASU the new Army Greens will replace will be retained as a traditional dress uniform. World War II U.S. Army officers wearing the “pinks and greens” uniform
The famous forebear, the ‘pinks and greens’ uniform was brought in in the 1920s and included a Sam Browne belt up until 1942.
In 1944 a field jacket was introduced, which was adopted by Dwight Eisenhower and nicknamed the Ike jacket as a result. A new version of the Ike jacket is also being considered by the Army, along with an option for a leather flying jacket.
At the end of WWII, the US Army was eight million strong and a source of immense pride for a nation emerging as a global power. Sadly, ten years after the end of the war there was a huge surplus of the uniforms as the Army slimmed down.
The change from the ‘pinks and greens’ to the dress green service uniform came quickly when in 1958 it was ‘deauthorised’ for US Army officers and the National Guard in 1959. Part of the reason for the change was that the uniforms were being used as cheap work clothes for labourers and agricultural workers.
In some states surplus uniforms were even being used to clothe prison inmates, driving the need for change.
However, seven decades on from WWII the abiding memory of the ‘pinks and greens’ remains one of pride, and the new uniform has received a warm welcome throughout the service, with many commentators welcoming the return of a classic.
Whatever Sergeant Major Dailey says the new ‘glow-up’ will invite comparisons with the famous WWII uniform, taking the Army back to when its status back home in the USA was riding as high as it ever has.
That the new iteration of the uniform could possibly capture some of the pride of 1945 is undoubtedly a target within Army sights.
Posted by MrGarabaldi at 2:47 PM