The Most lethal unit of the American Civil War.

I have heard of the term "SharpShooter' and here is where it had paid off, and with few exceptions the South had better marksmen than the North did.  After the war between the States as we southerners called it, the NRA was formed in 1871 by Union officers who were appalled by the  lack of marksman that was apparent to the American Public, especially the Northern states and they formed the organization to teach marksman to the American public in the belief that everyone needs to know how to shoot.  When I was in school and also when I was playing AD&D and other things I always wondered "Why didn't they dress and equip a unit for actual service in the field rather than look good in the parade ground, I know the Americans did a bit better at it than the British did during the American Revolution because we had to deal with the indians and nobody fought like the indians so we had to adapt to the indians and that is where Rogers Rangers came from and the Francis "The Swamp Fox" Marion, we adapted to the Terrain, we used camouflage to make it harder to be spotted.

At approximately 4:00 PM, July 2, 1863 the great Confederate turning movement at Gettysburg, meant to roll-up the Federal line from left-to-right, finally stepped-off, General Evander Law’s Alabama brigade leading the way.
Longstreet’s entire division was to deliver the blow, the assault performed in left echelon, one brigade going-in after the other. Law’s objective was Little Roundtop, a rocky hill, then unoccupied, that dominated the Federal line.
If the Confederates could secure that hill, the remainder of the Federal line could be enfiladed from the heights and rendered indefensible – game over.
As the Confederate skirmishers initially moved forward there appeared to be no force between them and their objective, but this was misleading.
Unseen to the Rebels, a thin skirmish line of Federals was posted from the base of Big Roundtop (approximately ¼ mile south of Little Roundtop) running west about 900 yards.
Very loosely strung, these 204 veterans represented the only Federal opposition between Law’s brigade and Little Roundtop. Fortunately for the Federal cause that day, this unit was the 2nd United States Sharpshooters, one-half of the most lethal detachment of the American Civil War.


Waiting behind a stone fence, Wyman White, one of the U.S. sharpshooters later recalled: “They came yelling and firing and struggling over fences and through the timber. Just in front of where I was, the land was open and, as they were mostly dressed in butternut colored clothes they had the appearance of a plowed field being closed in mass formation.”
Although outnumbered more than 10 to 1, the Sharpshooters calmly took aim, and began firing. “As we took the matter very coolly,” said White, “many a brave Southron threw up his arms and fell. But on they came, shouting and yelling their peculiar yell.”
The Sharpshooters had no hope of stopping Law’s advance, of course, only slowing it, and they went about this with deadly professionalism. Moving in groups of four, two laying down suppression fire while the other two withdrew to cover, the Sharpshooters began taking a heavy toll on the lead elements of Law’s advance.

The Sharpshooters had been built for just such an occasion. Uniformed in green hats, coats, and pants, these with leather gaiters (with no brass anywhere that might reflect sunlight), the Sharpshooters were deliberately camouflaged for guerilla-style warfare, a style with which they had become expertly familiar. 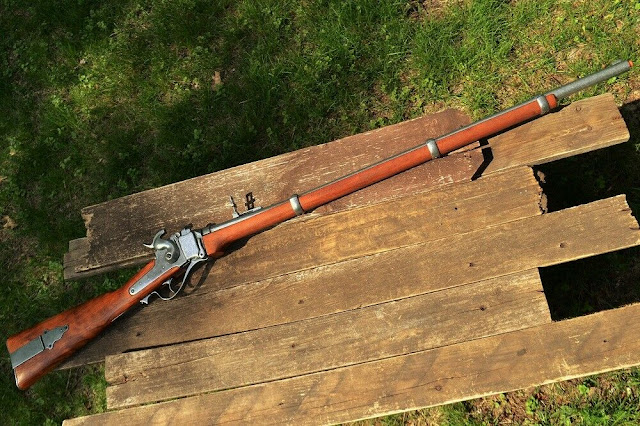 They wielded the Sharps, 1859 breech-loading target rifle, a weapon they could load and shoot from any position (prone, standing, or in a tree) with a rate of fire three-times that of any standard rifle. The Sharps was frighteningly accurate up to 600 yards, still deadly beyond.


More importantly, the Sharpshooters were a truly elite unit. To qualify each candidate had to pass a difficult shooting-test by forming a “string” of ten consecutive shots in a ten-inch-wide target from the distance of 200 yards. 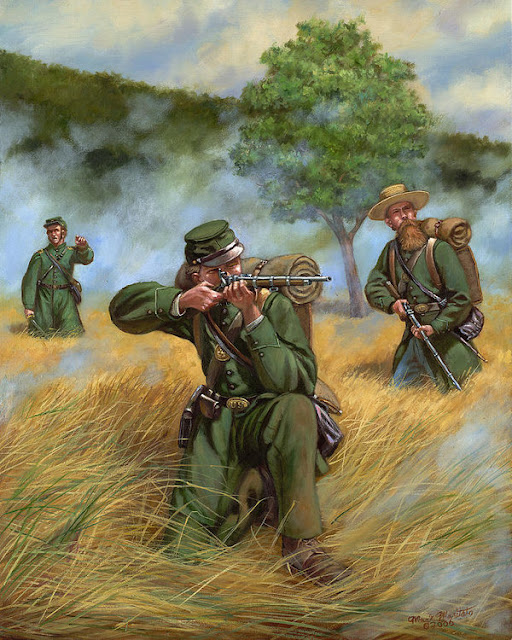 Undoubtedly patterned after the British Green Jackets of Napoleonic War fame, the Sharpshooters were the brainchild of Colonel Hiram Berdan, and they had performed superbly throughout the war.
Professionally selected, trained, and outfitted, fighting in a fire-and-maneuver tactical scheme, the 1st and 2nd Regiments of Sharpshooters were essentially a 20th Century battle unit, fighting a 19th Century war.

It should come as no surprise, therefore, that the men of the 2nd Regiment managed to significantly slow the momentum of Law’s advance, taking a heavy toll on the Confederates with their rapid-fire, breech-loading weapons.
Many Rebels fell, this sewing much confusion in the ranks. One Rebel officer noted, “the slaughter commenced in earnest for we were in good range of their sharp-shooters, but we could get no crack at them.” The rock-strewn woods west of the Roundtops proved ideal terrain for the Sharpshooters, but a nightmare for infantry advancing in ranks. Major Stoughton, in command of the 2nd, later wrote:
“While they were advancing, the Second Regiment did splendid execution, killing and wounding a great many. One regiment broke three times and rallied, before it would advance.”
Firing as they gave ground, the Sharpshooters fell-back across a small swamp, then over the western face of Big Roundtop before reaching the summit of Little Roundtop.


There they came upon the 83rd Pennsylvania, falling-in with them amongst the trees, rocks, and heavy boulders. The Sharpshooter’s pin-point shooting and stubborn withdrawal, had forced the Confederates to take an hour to traverse a mere quarter mile, providing critical time for Federal reinforcements to rush forward.

From their strong position the Sharpshooters helped repulse desperate charge after desperate charge of Rebel infantry, principally by the 15th and 47th Alabama, cutting Law’s men down as they swarmed toward the hill. White describes the fighting: “First the fire was by volleys which soon turned to a continuous fusillade of rifle fire. T
he bullets hummed and spatted the rocks and trees, glancing off with a hideous screech and hum.” The Confederates came-on time and again, only to be turned away, time and again. “Again the ranks withered,” White tells us, “but they showed the same desperate courage as they had before.
Our line was invincible so it proved, and again these brave men, broken, torn and exhausted, turned their faces down the mountainside.”

At long last Federal reinforcements arrived, and Little Roundtop was soon turned into a Union bastion, not to be tested again. Of the Union success that day, White wrote: “I think the breech loaders of the Sharpshooters was quite an item in the balance.”
White was hardly alone in his analysis. Years after the war, Colonel William C. Oates, who had led the 15th Alabama into action that fateful day, praised the U. S. Sharpshooters, claiming that, had they not been where they were, and fought as they had, he most certainly would have taken Little Roundtop. “They ought to erect the tallest monument on the field to Stoughton and his Sharpshooters,” said Oates.

Not only did the 2nd Regiment play a significant role that day, but the 1st Regiment also did their part earlier that afternoon in Pitzer’s Woods, northwest of the Roundtops.
Sent out to scout along Seminary Ridge with the 3rd Maine, the Sharpshooters stumbled upon the 10th and 11th Alabama Regiments of Wilcox’s Brigade, ordered into Pitzer’s Woods to refuse the right flank of the Confederate line.
Unaware of the Sharpshooters presence, the 11th was greeted by a torrent of well-aimed gunfire from the green-clad Federals. The 11th fled, while the 10th came-up and gave battle.
Outnumbered, the Sharpshooters once again gave ground, fighting tree-to-tree, in a stiff action that went on for almost a half-hour. Wilcox then threw-in the 8th Alabama with orders to flank the Yankees.
Only when the 8th appeared to overlap his position, did Berdan break-off the engagement; a spirited fight that exposed the true length of the Confederate position to the Federal high command, observing from a distance.

The Confederates also had excellent sharpshooting units, of course, but none rose to the level of the U.S. Sharpshooters.
The exceptional service rendered by the U.S. Sharpshooters throughout the course of the war was readily acknowledged by officers in the know, nevertheless – like most Civil War detachments – they were fought to death, then simply disbanded.
How good had they been? In his Regimental Losses in the Civil War, Lt. Col. William F. Fox wrote of the Sharpshooters: “They undoubtedly killed more men than any other regiment in the army. In skirmishing they were unequaled,” a firm testament to their multidimensionality and sheer lethality.

Unfortunately, no one at the time seemed to grasp what the Sharpshooters truly represented – the face of combat’s future.
The Industrial Revolution had stimulated a rapid evolution in military hardware, a progression in lethality that had already rendered massed infantry assaults – the very backbone of warfare since its inception – obsolete.
Unfortunately, no one seemed to take notice. Even the generals who led troops into WW I did so initially as if refighting the Civil War, thus marching millions into a maelstrom of virtually unavoidable death.
As a result, all the lessons of warfare the Sharpshooters represented had to be relearned in the 20th Century as the world careened into two catastrophic World Wars.
Only then did it become clear that Berdan’s small group of elite Sharpshooters were, not only the most lethal fighting force in the Civil War, but a proven template for infantry of the future.