I was asked to run a Boy Scout Range for a camporee and I decided to use that as an excuse to run my new M4gery.  Well I took the rifle to the range.... 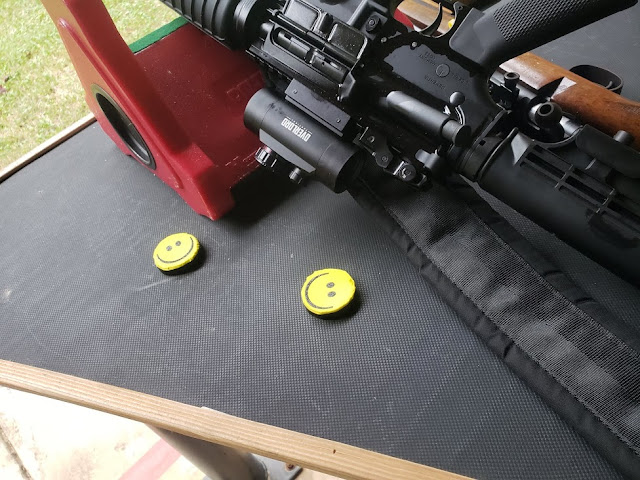 I had inserted a .22LR adapter into my rifle so I could save my 5.56 caliber stuff until after the rifle was sighted in.  Well I fired the first 10 rounds.....Then looked at the paper, totally blank, I then thought really hard then remembered that I forgot to run a boresight laser through the rifle before I left....Dangit....So I then said, "Screw it" flipped up the backup Iron sights,   Fired 10 rounds, looked at the target, good grouping, but off to one side and down....So I went up 4 clicks, and to the right 4 clicks, then right in the "bullseye".  Well at least the backup sight was zeroed in..  Well then the scouts started showing up. So I had to put the rifle up without drawing attention to it.  We got everyone together, I ran the safety briefing then they started shooting.....then "BOOM".    Lightening Hit.....So we had to stop shooting then shut down the range, it had started raining, but I was willing to keep going until the lightening and thunder hit.  Well we closed the range  and that was it.......dang.
Several days later, I drag out my rifle, Find my laser boresight, and discover what I had forgotten, how temperamental that thing was....Sometimes that thing works.....sometimes it don't.   I see a new laser boresight in my future.....Just saying. 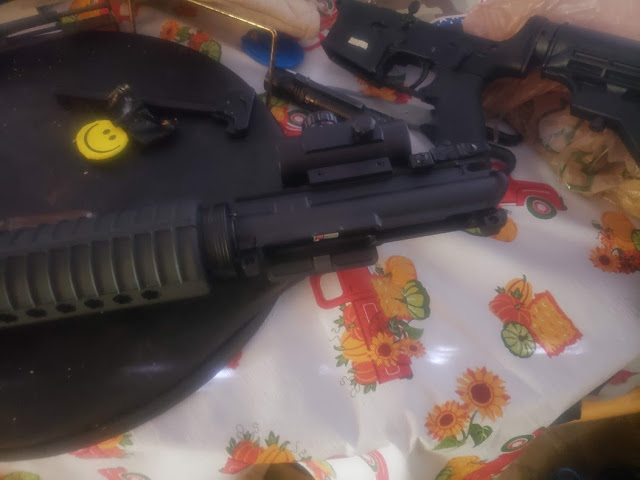 I separated the Rifle to make it easier to manipulate.   I decided to use my "work" flashlight, which is small and super bright to see if can project a beam down the barrel instead of the temperamental boresighter. 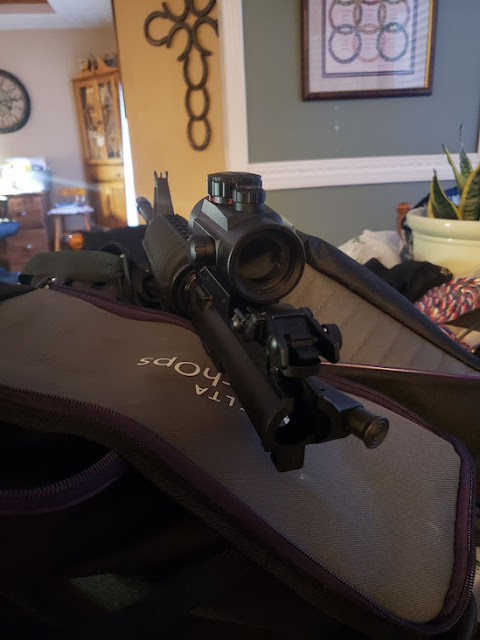 Position the Upper on the range bag with the barrel facing the wall in the living room. 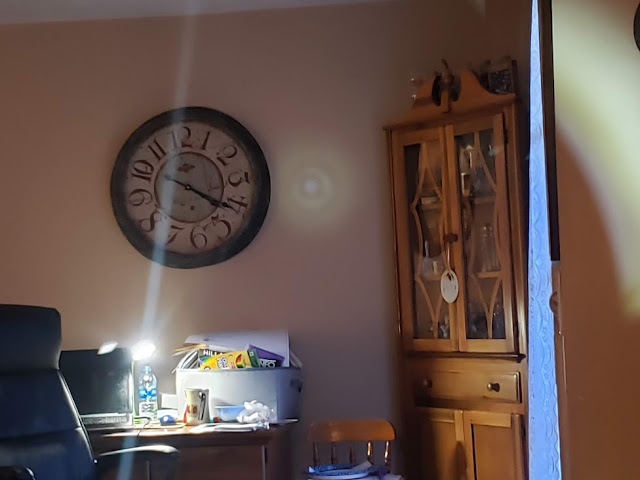 You see that circular light next to the clock?    Yep that is the light from the flashlight projecting down the barrel, I now have my reference to help align my optics. 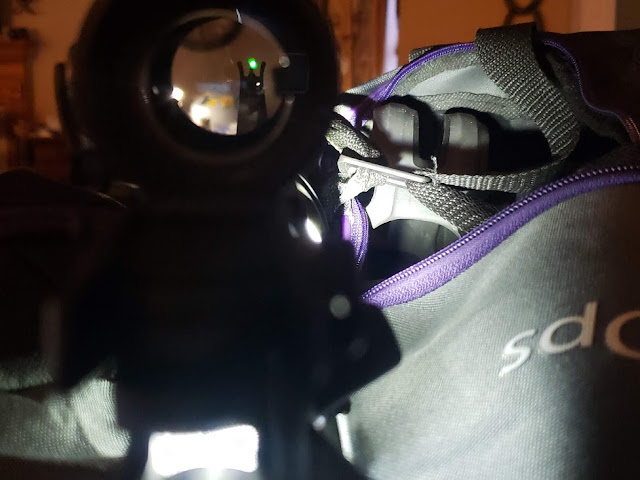 You can see the "Green Dot" through the Optic and you can barely make out the light from the barrel , this pic showed me after I had already started aligning the sigh and the light from the barrel.  It was Way off.....High initially from the initial reading,    I have it in the ballpark now, but I will have to shoot it again to bring it to better alignment. 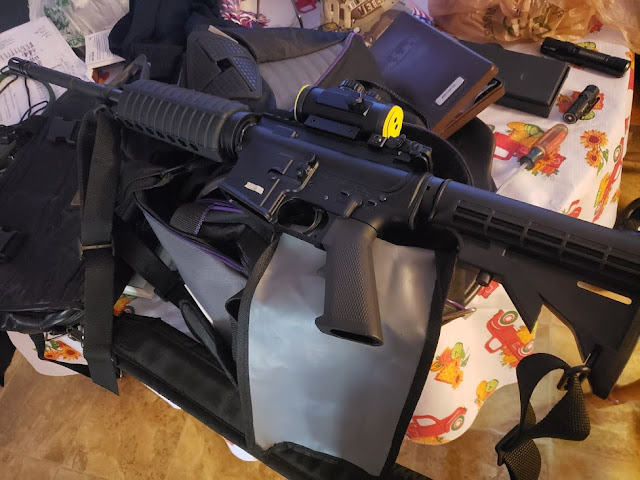 The Rifle is back together again. 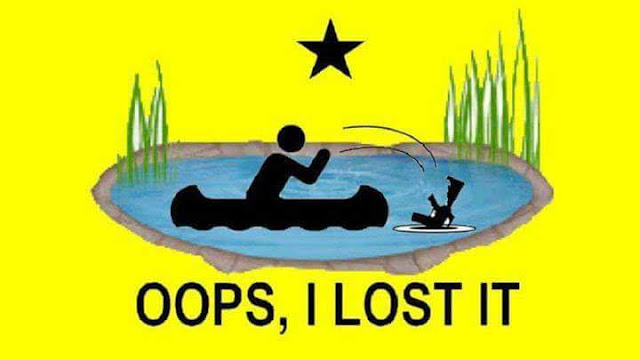 I have heard that ATF is proposing a new rule, for us Rifle owners, it is a flotation device to prevent any future Canoe or Kayak accidents......I do know that it is an epidemic that is soo bad that it makes Kungflu look like the sniffles 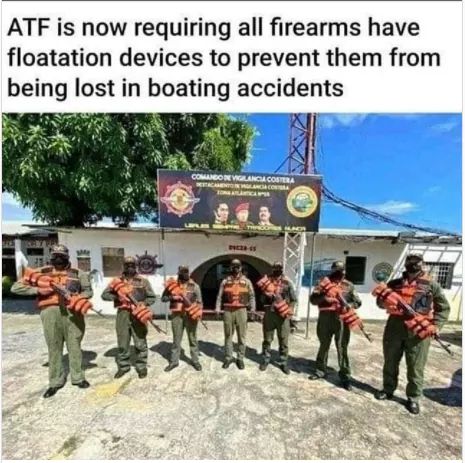 Dang.........You know how many rifles this could have saved...? from the twin terrors of Kayaks and canoes?....Especially canoes....those things are weapons of mass destructions...The Sheer cargo capacity... 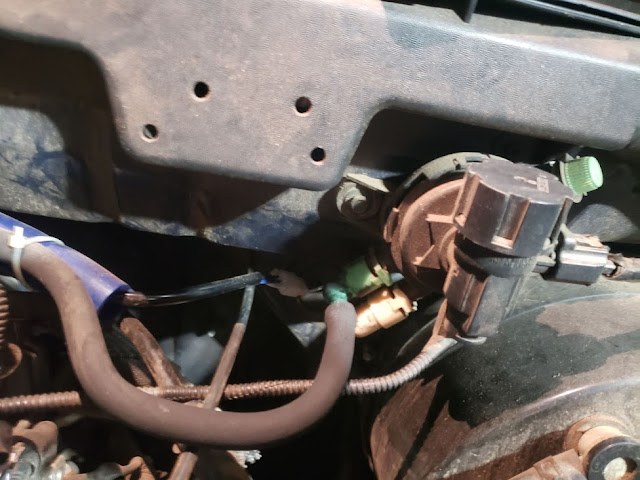 Well I am still having problems with the stupid "Service Engine Soon" light, and I had already used the "Ether" trick to look for a vacuum leak and didn't find it, but I did notice a dry rotted vacuum hose so I went to replace it hoping that it solves the problem.   It is connected to the Cannister Purge Solenoid 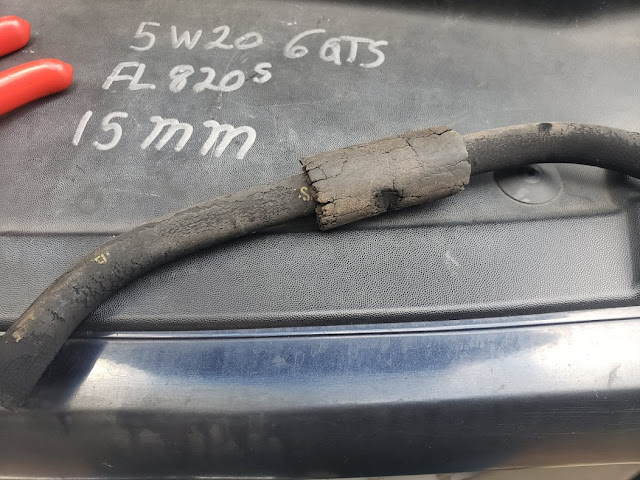 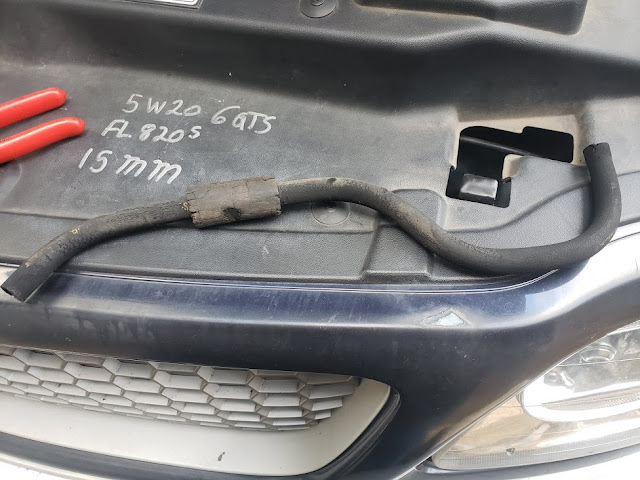 I took the hose and went to NAPA to find a comparable size and started the installation. 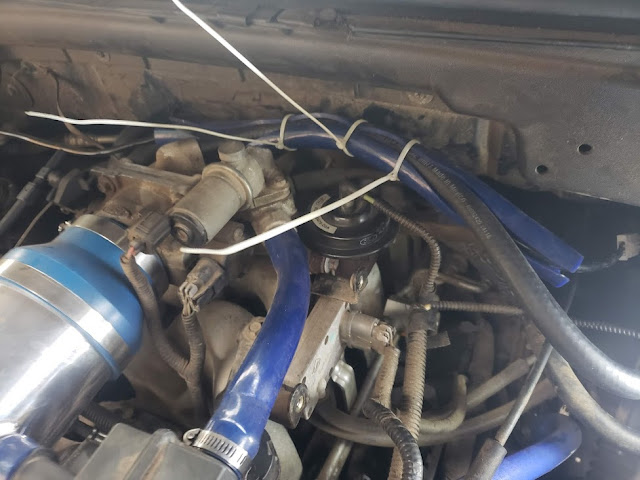 Doing the Installation.....I like Zip Ties, it keeps things grouped together. Blame my Aviation background. 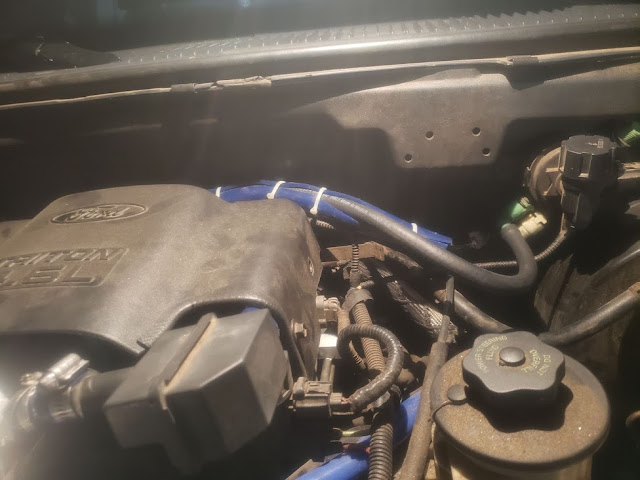 Everything installed and grouped. 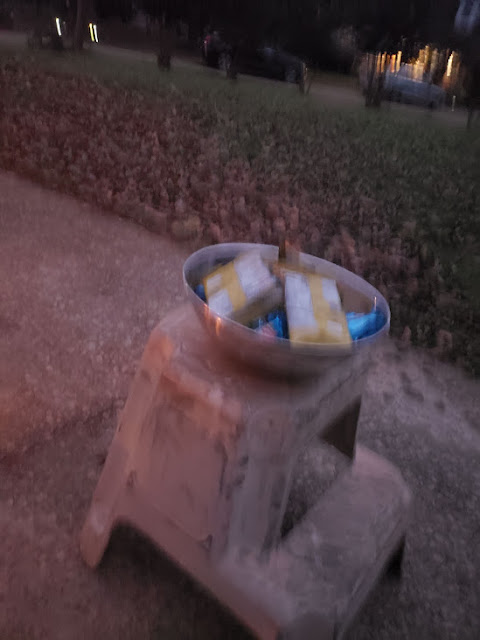 While I was doing this, I had kids coming up the Driveway...That is a dish with Candy.....
My problem exist still, I am annoyed...but I will solve the problem... 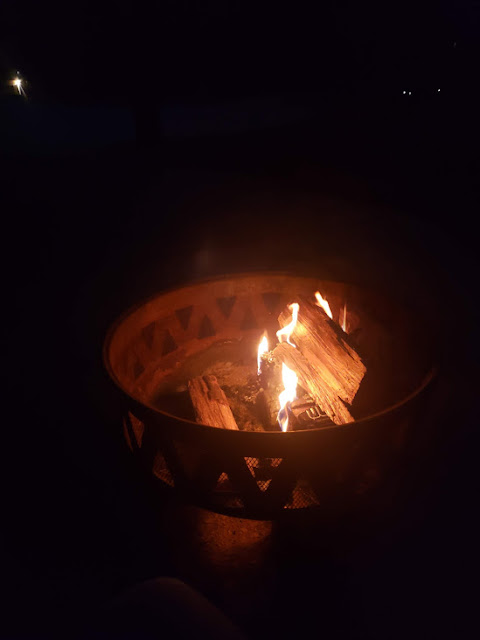 We got the Firepit going as more kids came up, it is something we do every year.  I was pleased that kids were coming up for more candy despite the media scaring the crap out of people about the Kung-flu and the "New Normal".
And Finally
I Clipped this from "Monster Hunter Nation, Hunters Unite on Farcebook
The night had come. Midnight had passed and by the reckoning of Time the confluence was perfect. All Hallows’ Eve in 2020. The Veil was thinnest now in a year that had already worn down all other barriers.
This night the gaunt, skeletal form of mortality, robed in the black of eternity, observed his prey. She had been out of reach for far too long and her power had grown strong, the Will of the People sustaining her and protecting her. This night, however, the ledger would balance.
Mr. Black allowed himself the ghost of a smile and approached Ms. White.
A deep, somehow broguish, clearing of a throat shattered the silence. Mr. Black turned to see an old man with a good face staring at him. The man's eyes twinkled slightly beneath the shadow of his newsboy cap, his hands casually tucked into the pockets of a pair of tweed trousers. A miniscule smile curled his lips and turned his well kept white beard.
Mr. Black tilted his head in confusion. No one else should be here. No one should be able to see him. He turned back and Ms. White was gone. The opportunity squandered, irritation rising for the first time in millennia. He slowly returned his attention back to the intruder. The ledger would need a line item one way or another.
The man slowly took his hands out of his pockets and squared his shoulders, “Oh what the hell? You gotta die of something.”
Mr. Black paused. Such confidence in his presence. No fear, no begging, no denial, no anger. Just an understanding.
The man was now wearing a U.S. Army dress uniform. The glimmer in his eyes had now become a reflection of iron will and steel nerves, “now, are you sure you want to have a fight? Because I'm only gonna use my thumb.”
What nonsense was this mortal speaking?
“My right thumb,” he continued, “left one's much too powerful for you.”
In that moment an umbrella appeared in the man's hand. With that right thumb he opened it and, with many a strange sound and popping of the fabric, a mysterious flock of seagulls appeared. Squawking, fluttering, defecating, and being a general avian nuisance.
The man was now wearing a brown suit, bowtie, and tweed bucket hat. “I suddenly remembered my Charlemagne. ‘Let my armies be the rocks, and the trees, and the birds in the sky.’”
Mr. Black was now amused. How long had it been since his grim business had been anything but tedious?
The man now sported the most ostentatious of red attire, complete with a cocked hat and plume. A look one could almost call Spanish, were it not for the heavy Scottish accent of the man. But this man was no ordinary man. He could probably even be a Russian if he so chose to be so.
“When only a few of us are left, we will feel an irresistible pull towards a far away land, to fight for The Prize.”
At this Mr. Black chuckled. Actually chuckled. Mirth unheard since before time was time finally allowed to surface. His voice dry, cracked with passage of empires.
“Do you lose as gracefully as you win?”
The man, now young and lean, presenting a dashing form in a tailored tuxedo, tilted his chin up slightly and replied, “I don't know, I've never lost.”
The ledger balanced. 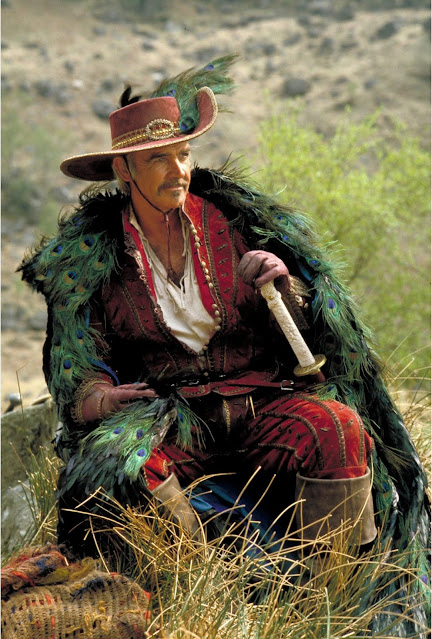 Sean Connery Passed beyond the Rim, he was 90. He was best known for James Bond, but I liked him as Juan Sanchez Ramirez, from the Movie "Highlander" as well as "Hunt for Red October". and many other movies.