"Creating Racism" where it don't Exist.

Yes I snagged this from Bill O"Reilly again....This ties in what I have been saying, we are teaching a generation of kids that "Western Civilization" is evil and that our country is "Bad"   How can you have kids that are willing to believe in this country and defend this country if they believe that it "is bad".  This is the end result, who will fight for it?  If the Chinese invade, will they be willing "5th Columnist" that will knife their fellow Americans in the back because they were programmed since a young age to "Hate America", This is the danger we have with this "Woke Crap" that is being taught in school and people are afraid to call them out because the cancel culture is soo strong.  I am fortunate that my son is graduating high school and his political beliefs are set, but when he eventually have kids, they will go into the toxic miasma called the "education System" in this country, and I am not sure that Private Education is much better since they pull their teachers and curriculums from the same sources as the public schools.

Imagine you are a third grader in the Wake County, North Carolina school district, the largest in the state.  All around you are children of different ethnicities and skin colors.  Your parents say that you are in school to learn things that will help you throughout life.
But there is something very wrong in your school.  Because you’re just nine years old, you may not fully understand what is being presented to you, at least by some teachers.  Their attitude about American society is hateful and this is being passed on to you.
According to reporting by the magazine City Journal, more than 200 North Carolina teachers attended a racially provocative conference, and the Wake County public schools have launched a campaign entitled “whiteness in educational spaces.”
Basically, some schools are forming “equity teams” that are pushing a concept called “anti-racism.”
According to documents obtained by journalist A. P. Dillion, teachers are being instructed that white “cultural values” include denial, fear, blame, control, punishment, and one-dimensional thinking.  Of course any group could have elements that embrace those things but for the Wake schools it’s exclusively a white problem.
In one teaching session, the argument was made that “whiteness perpetuates the (American) system of injustice.” Therefore, teachers should challenge the dominant ideology of whiteness and actually disrupt white culture in the classroom.
This incredibly racist point of view is not just on display among the “woke” in Wake County.  It has taken root all over the country.
The race hustlers who peddle this pernicious propaganda also advised teachers to disrupt any parent who might object have his or her child brain-washed.

“You can’t let parents deter you from the work,” City Journal quotes an instructor.  “White children are benefiting from the system.”
This is simply horrible.  Young children being taught skin color dictates their lives. Talk about creating division and bitterness.
But if you confront the educational bigots, you are immediately branded a bigot yourself.  You are canceled.   Loathed. Your reputation sullied.  This is the great far-left racist strategy.  Oppose us and we will destroy you.
Many public schools and colleges are now spreading a contagion far worse than Covid.  It is a poison that harms the minds of American students who should be taught the virtues of brotherhood and sisterhood.
Instead, many kids are getting lessons on the evils of “whiteness.”  For this illness, there will be no vaccine. 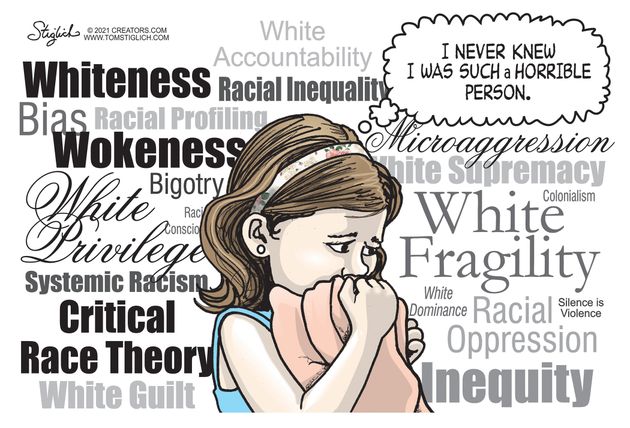