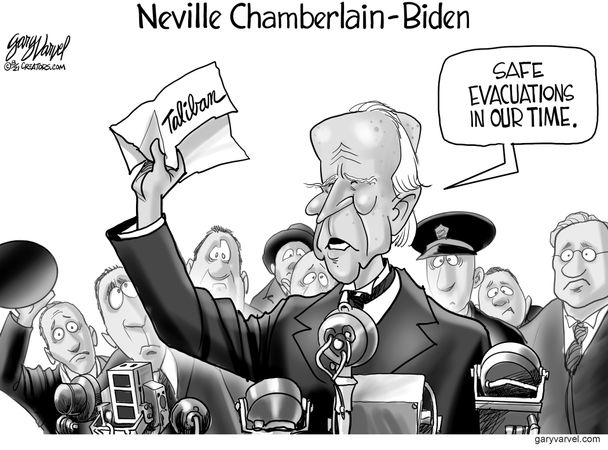 I have calmed down from the debacle called "The Afganistan Withdrawal".  My emotions are no longer hot, they are cold furious at the total ineptness of the Xiden Whitehouse.  Hell even kids know to take their toys home with them.  Instead we leave Americans over there trapped and the Xiden State Department are playing games with the private flights trying to get the rest of the Americans and any Afgani allies that haven't been killed by the Taliban, you know the ones that American Military left because they were under orders by Xiden and Milley not to go get them and then had them interfere with the Polish, French, British and anybody else that was trying to get any westerners out because it was making the Xiden administration look bad after Xiden went on Television and said that "there will not be no Saigon".  Funny that having Kabul fall in a weekend and now that the Taliban are in charge of Afghanistan, and there was a few provinces that were holdouts that were captured with the overt help of the Pakistan ISI and their Helicopters....You know the same Pakistan that sheltered OBL and we just conveniently "glossed" over that fact for the past 15 years. WTF?!!.  And what is Xiden administration "Deeply concerned about? "Lack Of Diversity" from the Taliban in Afghanistan ....Really?   What kind of make believe dreamland are these people living in?  The Taliban follow the edicts of a 7th century century death cult where women are chattel.  Jeez. 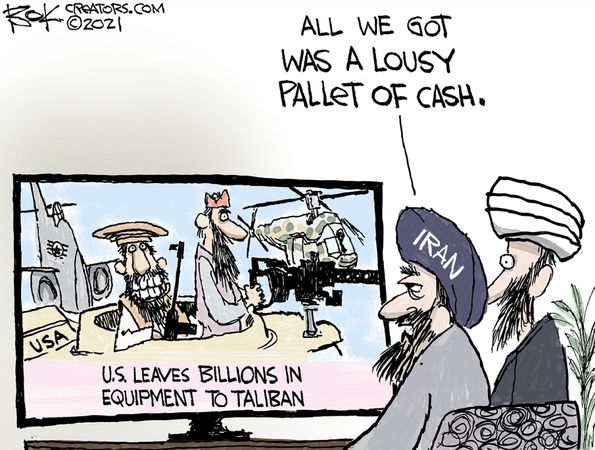 Meanwhile all that equipment that the ineptness of the Xiden administration allowed to fall into the hands of the Taliban have allowed their sponsors, the Pakistani's, the Iranians, and the Chinese to allow the latest in western technology with is a boon to their R&D efforts to develop counter measures to our ways of war.  The Same administration that has issues with us American citizens owning firearms but yet have no problems turning over 600,000 actual assault rifles, millions of rounds of ammo, machine guns, MRAPS, Helicopters, airplanes, Drones, night vision gear and a myriad of other items of a modern Army but yet they talk tough to American citizen and act like pussies on the world stage. 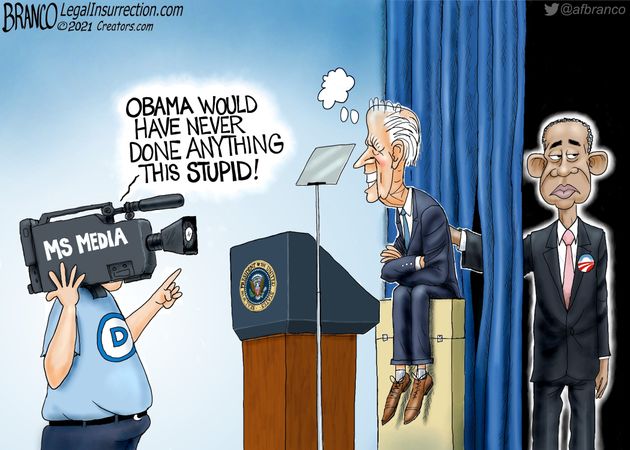 It is the same thing when Barky Lightbringer was in charge, he was a wimp to the world, but to the GOP and to conservatives he was confrontational, and the complicit Mainstream media would cover for him and sing his praises. 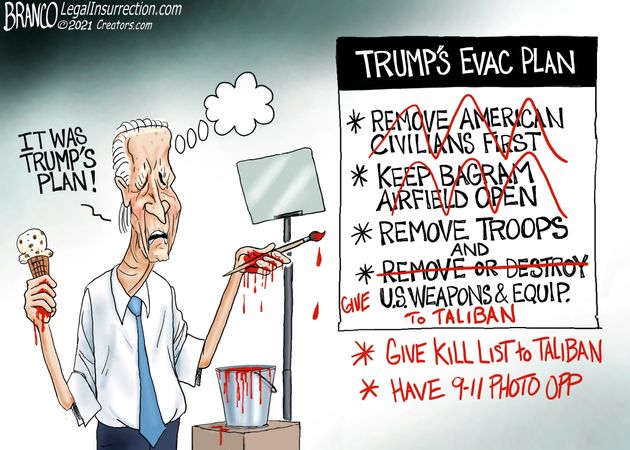 Meanwhile the Xiden ardent supporters a trying to blame the debacle on the former President Trump's administration saying "We were following his plan, so it is his fault" Well there is a couple of things wrong with that assertion...

1. As soon as Xiden came into office, he immediately reversed as many of "Orange Man Bad" policies as he could, to somehow stick with this one thing kinda flies in the face of that.

2. And this is the most important part, he is the President, his handlers stole the election, he wanted the job, so as President Truman said whom is a fellow democrat(although I'm sure that he wouldn't recognize the current crop of donks as being anywhere near "his" party of democrats back in the day.) "The Buck Stops Here".  You saw that the situation was going pear shaped and did nothing, YOU OWN IT. 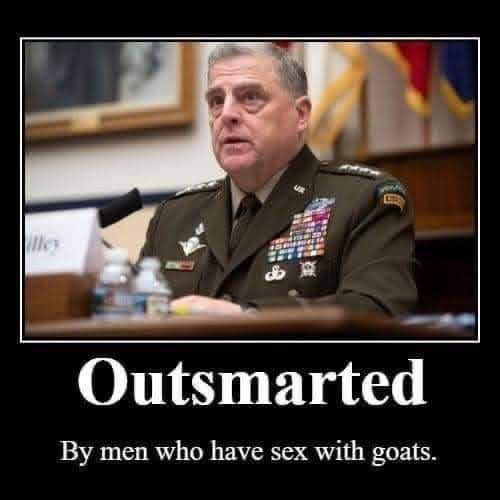 My rant isn't done, Not only am I pissed at the Xiden Whitehouse, I am really pissed at the Military, what General thought this was a good idea? First off to Give up Bagram?  That huge base 1 hour outside of Kabul?  What genius thought it was smart to sneak away in the middle of the night and leave a bunch of equipment for the Taliban?   It was all over social media the supplies and munitions that were left when we snuck out of there?  Somebody wasn't verifying stock or rendering it inert? WTF, but this was a portent of the bigger goatrope when the government fell and Taliban just walked into Kabul over a weekend

What I am really angry about is the sheer arrogance, it is like the 5 sided Puzzle palace forgot the lessons of Vietnam, Oh Yeah, the Officers and men that were around and experienced that loss and swore that we wouldn't EVER do it again.  They rebuilt the Military from the bad days of the Carter White House, Revamped doctrine, developed AirLand Battle, and totally changed our way of war, they saw what had happened in Vietnam and didn't want to have it happen again. So we had "Desert Storm" which was a war like no other, and I was part of that and I am proud to be part of that, we liberated a country that was attacked and seized by a bully so to speak and we went in and freed Kuwait and kicked their asses and now Kuwait is doing really well and I am proud of that, but it was built on the lessons of Vietnam by the guys that were there before me.

But the new breed of Officers all they had was the hubris of "We won" and that was it....Really?  Only a fool forgets the lessons of the past.  Hell us enlisted and lower grade officers officers knew what the hell was going one, but for some reason once you got those stars, you got a partial lobotomy and forgot everything that they taught at those service schools except "CRT" and "White Fragility" instead of warfighting. You saw a piece of it a few years ago when the Navy had a couple of ships damaged in collisions, and the root cause was that they had people unqualified running the bridge.  Apparently Diversity and inclusion are more important than learning how to crew a ship.  I blame some of this on President Obama, but the rot had started before then during the Clinton administration. But what really gets me..there were no resignations from the 5 sided Puzzle palace, no resignations from the clowns from foggy bottom.  the only person that has resigned was a Lt Colonel from the Marines who resigned because he demanded accountability from his chain of command for this and they are all cowards and stayed silent in their shame.  They knew it was a bad idea, they knew it was a bad call and nobody was man enough to throw their stars on the table and tell the "National Command Authority" that he is fucked in the head.  No they stayed silent to preserve their position and power and consulting gigs after they hang up their suits,  what the hell happened to integrity? what happened to Honor? what happened to Duty?   like craven chicken shits they stayed silent and let the United States get humiliated like nothing in recent history.  The Officers of Old would have resigned, or ate a bullet for the shame that they brought on this country, but these clowns?  Jeez I am still pissed. 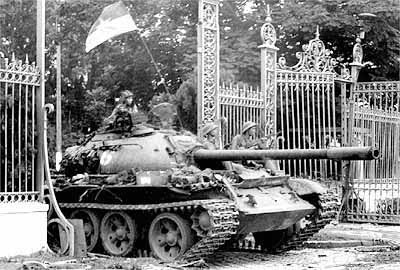 I remember as a kid watching my Dad glued to the TV in April of 1975 and I couldn't understand why he was so angry, hey I was a kid you know.  When I got older I better understood the significance of that date.  I later asked him and he told me that he was ashamed that all their sacrifice and loss was for nothing.  Granted the South Vietnamese stood for 2 more years but after their supplies and support was cut by the democratic congress what was full of supporters for North Vietnam and they enjoyed shanking South Vietnam and President Ford had no political capital left after pardoning Nixon.  Granted it was the right thing to do, and it probably cost him the presidency in 1976 and gave us the now 3rd worst president in modern history. 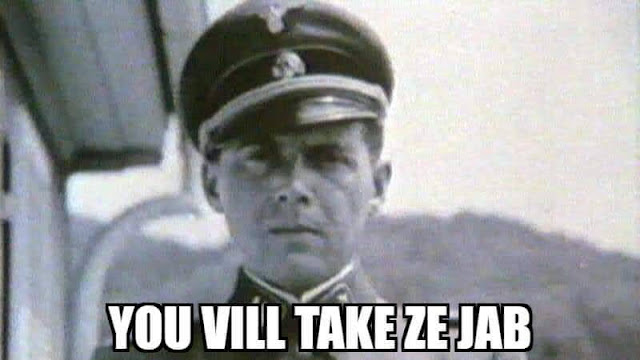 Besides that circus, we have America splitting up into "Vaxxed" and Unvaxxed" camps and the liberals are in the "vaxxed camp and they believed that anybody that doesn't accept the holy sacraments of "The Jab" .are subhuman and should be treated like vermin,, herded into camps and ostracized from society as a threat to society.   I recall version 1.0 of this circus and 6 millions Jews plus other "Undesirables" were herded into camps because they were viewed as a "threat to Order, threat to Society, Threat to Health", and other reasons and a  certain modern  20 century European country after stripping them of their rights including firearms via the "Nuremberg Laws" and stripped them of their citizenship  then herded them into ghetto's after seizing all their property for "the Good of the State".  Now there is a new generation of the same kind statist trying the same thing here, they have already starting the ball rolling by segregating people in their houses, isolation certain groups and if you think your neighbor won't fink on you...Guess again,  once your status comes out that you refuse to accept the "Holy Jab", you will be considered a "NonBeliever" and cast out of Mainstream society.

You doubt me? Go check on Twitter and see what the average liberal thinks of you.  People wondered how Anne Franks wound up dead in a Nazi Death Camp?  Her family neighbors may have squealed on them, Your neighbors may be encouraged to squeal on you.  in East Germany, 1out of 7 "Osters" were informants for the "Stasi" whom helped the German Communist Party remain in power.  The Stasi were better secret policeman than the KGB. 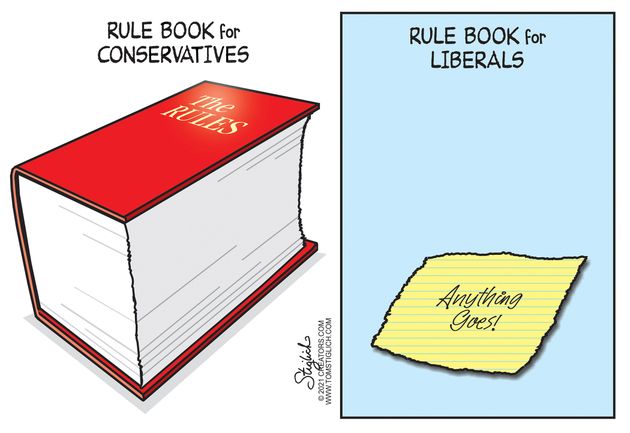 I don't know what the next 3.5 years will bring, I am not sure if we can vote our way out of it, the Donks stole the 2020 election and I believe that they will try even more crap in 2024.  They will use the excuse of another variant to keep scaring the crap out of people and when people are scared, they use emotions and emotions are a bad things and their media sycophants will keep  the fear drummed up so they can use the emergency power to keep themselves in power and they will push it as long as they can until the country implodes or explodes.

Posted by MrGarabaldi at 5:34 PM

Email ThisBlogThis!Share to TwitterShare to FacebookShare to Pinterest
Labels: rants and musings