Rescorla’s career in the military started at the age of 17 when he joined the British military. There he trained as a paratrooper and would later serve in Cyprus. At the end of his Short-Service Commission, he joined the Northern Rhodesia police before returning to London to join the Metropolitan Police Service.
Rescorla’s tenure with the Met police was short-lived and he soon emigrated to the United States where he lived in a hostel in Brooklyn. He stayed there until he was able to enlist in the United States Army. He completed basic training at Fort Dix.


After basic training, he completed Officer Candidate School and airborne training, graduating with the assignment of platoon leader.
He became infantry leader of Company B, 2nd Battalion, 7th Cavalry Regiment, 1st Cavalry Division. Rescorla and his men were one of the first combat units on the ground in Vietnam.
In November 1965, he and his unit were involved in the battles in the la Drang Valley. One of the moments from these battles was captured by a war correspondent and appears on the cover of We Were Soldiers Once And Young. This iconic image is of Rick Rescorla holding his rifle with bayonet attached and marching forward into battle.


Rescorla and his unit fought at Landing Zone X-Ray before being extracted and provided with a brief rest. They were then instructed to return to the valley and reinforce another unit. The battles lasted three days, during which time the companies faced superior numbers but were able to hold off and drive the enemy forces back.
For his part in the war, Rescorla was honored with the Vietnamese Cross of Gallantry, a Purple Heart, a Silver Star, and the Bronze Star with Oak Leaf Cluster.


After leaving active duty, Rescorla remained a reserve, retiring with the rank of colonel. He used his military benefits to study creative writing and eventually earned a law degree from the Oklahoma City University School of Law.
He would go on to teach criminal justice for three years and publish a textbook on the subject.
His teaching career was short-lived and he moved on to the world of corporate security, joining Dean Witter Reynolds at their office in the World Trade Center.
It was during his time there that Rescorla became concerned with the security of the towers. This was prompted by the 1988 bombing of Pan Am Flight 103 over Lockerbie in Scotland.

The bombing pushed Rescorla to invite his old friend, Daniel Hill, to assess the security of the World Trade Center. Hill was trained in counterterrorism and determined that the basement would be the easiest target for a terror attack.
The two of them used the findings to write a report to the Port Authority of New York and New Jersey insisting that more security be added to the parking garage. Their recommendations were ignored due to the costs, leaving the building open to the 1993 terrorist attack.
During the 1993 attack, Rescorla was upset by the poor evacuation of the building and vowed that it would never happen again. In 1997, he became the director of security for Dean Witter/Morgan Stanley and was able to make some of the changes he wanted.

Rescorla did recommend that the company find different office space due to the vulnerability of the building, but lease obligations made this impossible. This left Rescorla to create an emergency evacuation plan that all employees had to practice again and again.
The emergency plan ensured that Morgan Stanley employees were ready for any attacks. On the morning of September 11, 2001, Rescorla heard the explosion from the North Tower and saw it burning from his office window on the 44th floor of the South Tower.
An announcement from Port Authority came over the PA system telling people to remain at their desks. Rescorla ignored the announcement, grabbed his bullhorn and ordered Morgan Stanley employees to start evacuating.


He directed the employees down the staircase and continued to encourage them when the building lurched as the second plane hit. To keep everyone calm, Rescorla started to sing as he had done for his platoon in Vietnam. 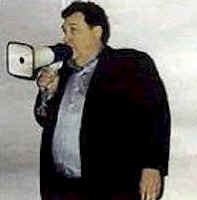 Rick pushing people out of the building in Sept 11, 2001 saving their lives, this was the last pic that was taken of that man.
2,687 employees of Morgan Stanley owe their lives to Rick Rescorla as they were successfully evacuated. After seeing to this, Rescorla returned to the South Tower to ensure that everyone was out.
He was last seen on the 10th floor heading up shortly before the tower collapsed. His remains were never found and he was declared dead three weeks later.


Rick Rescorla was a man who saw battle with two armies and the start of the War on Terror. All but 13 employees of Morgan Stanley were able to exit the South Tower safely because of his leadership and foresight. 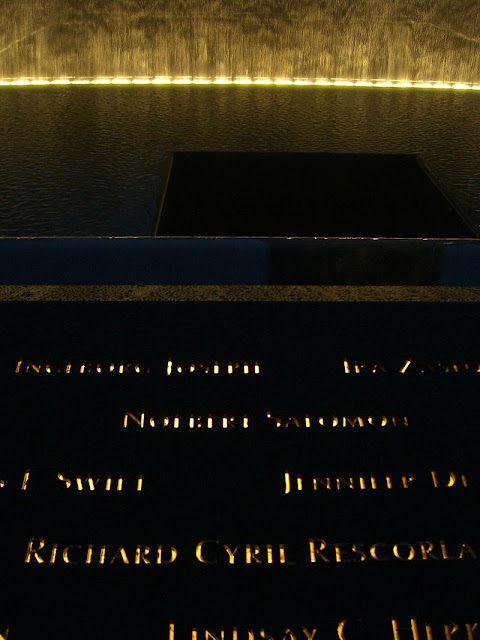 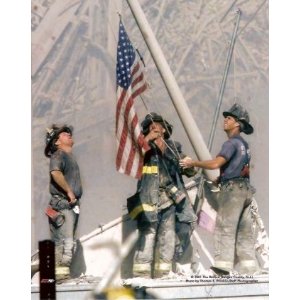 One of my favorite pics, it shows the indomitable spirit of the American People. 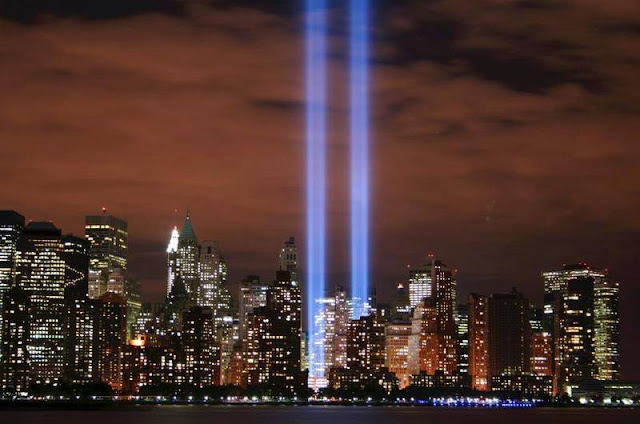 Email ThisBlogThis!Share to TwitterShare to FacebookShare to Pinterest
Labels: 9-11