Still working a lot of "overtime", I ain't complaining, but I am tired,  I am off today, but I plan on piling it on all next week if I can get it.  (Momma wants a new pair of shoes*rolling dice*, lol).  I have a rant or two that is perculating, but it may be a bit before I post it.

I snagged this off "American Rifleman" it was sitting in my "almost ready" post that I didn't upload sooner.  I thought it was pretty cool.

On June 6, 1944, in conjunction with the naval landings of Operation Neptune, the U.S. Army sent in two airborne divisions to land behind enemy lines in Normandy, France, as a part of the overall D-Day landings. One of these two divisions was the 101st Airborne, who wore the now legendary "screaming eagle" patch. The 101st Airborne Division was tasked with capturing a series of beach exits and enemy strongpoints directly inland from the shores of Utah Beach. The division would parachute in with 6,928 men, ferried by numerous C-47 transport aircraft. 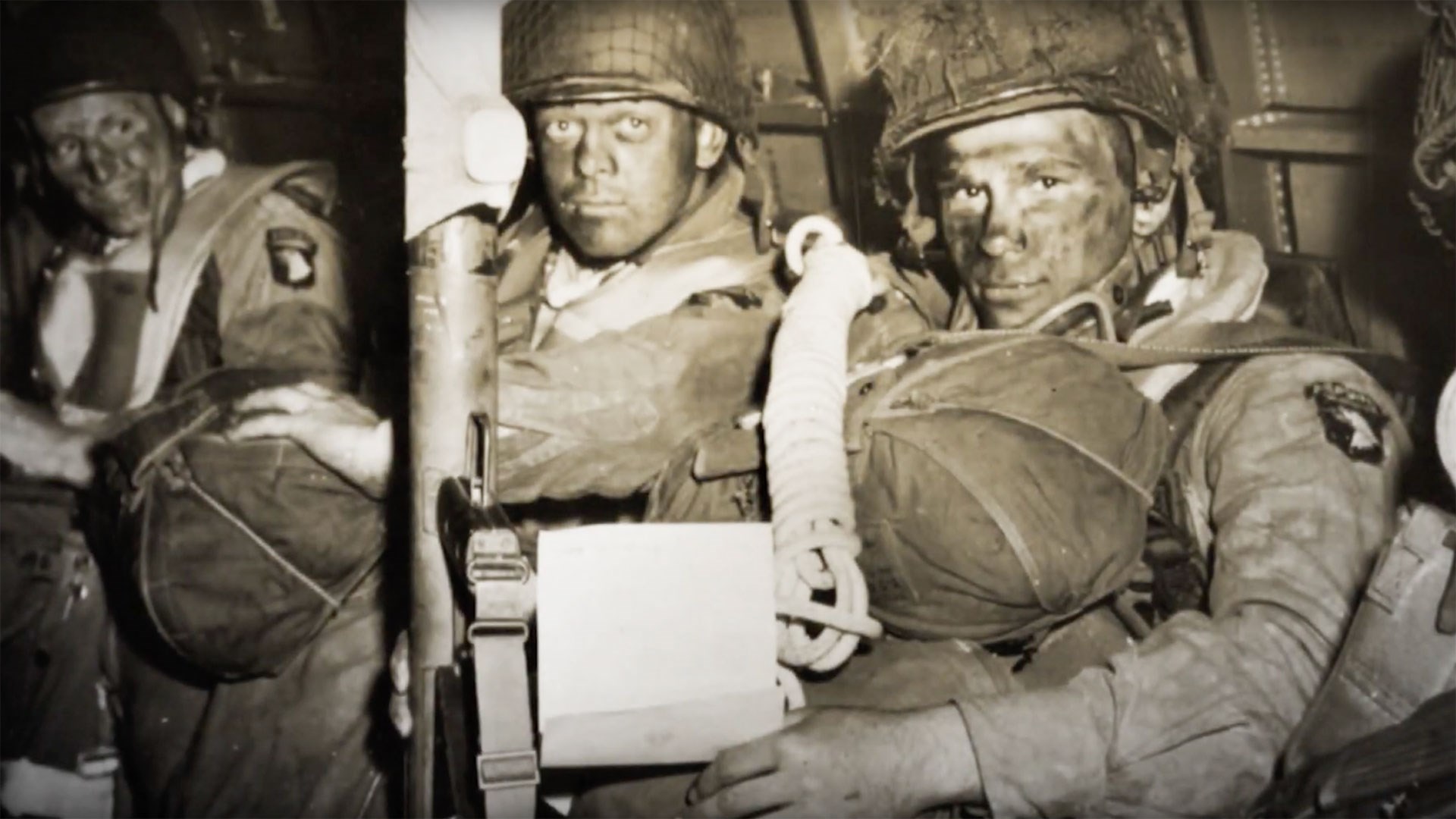 Paratroopers of the 101st Airborne Division geared up and sitting in a C-47 transport aircraft.

As recalled by 101st Airborne Division veteran, Donald R. Burgett, the force took off from airbases in England just before dark on the evening of June 5, and by the time they arrived in Normandy and began to parachute in, it was 1:14 a.m. The aircraft flew in through a fog bank, which caused them to scatter a bit. The C-47s were flying so slow that, as Don recalls, he felt the opening sock, looked up to see machine gun tracers fly through the canopy of his chute and then hit the ground. They had been dropped from merely 300' off the ground, much lower than the 700' minimum they were supposed to jump at. 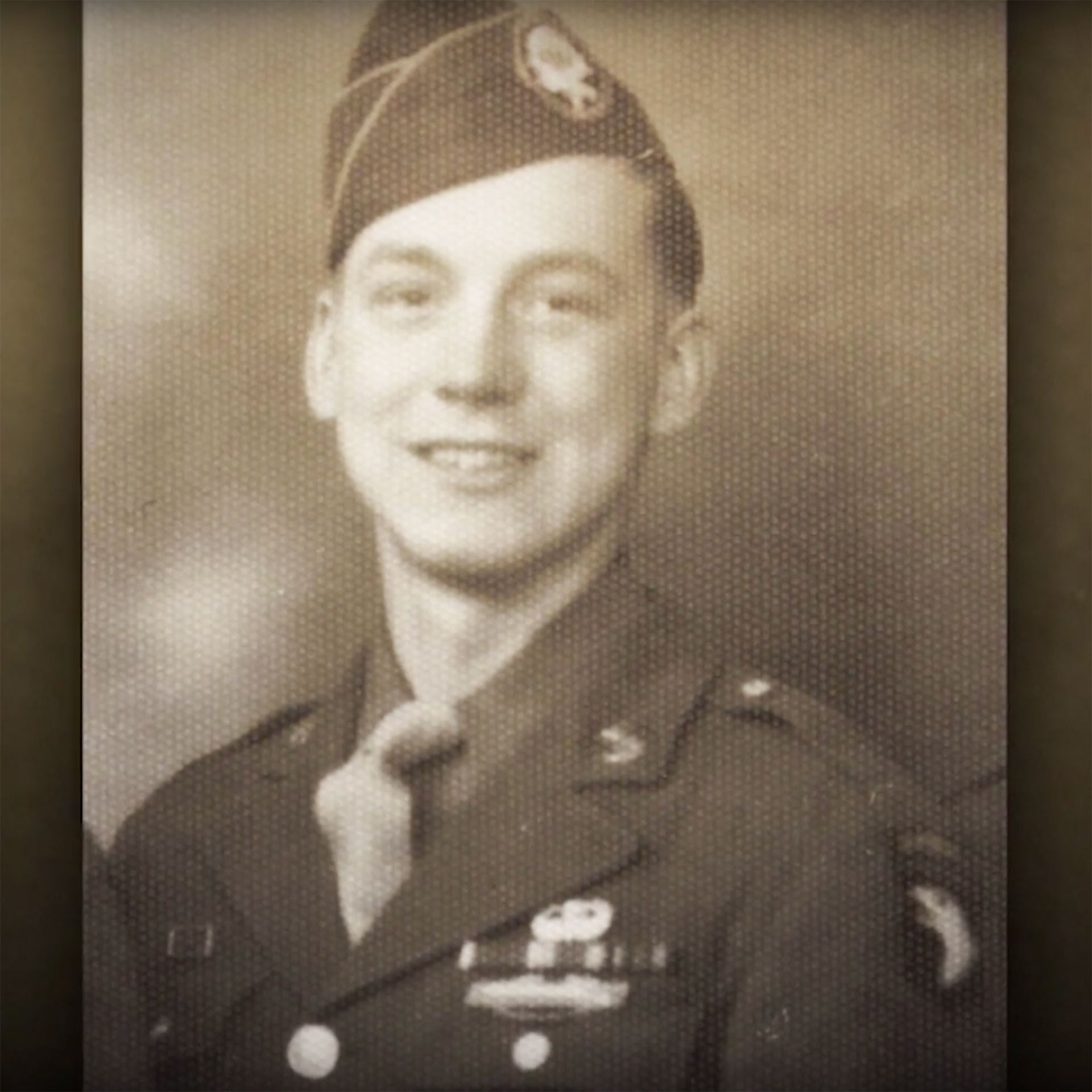 A photo of Donald R. Burgett in uniform during World War II.

Another 101st Airborne veteran, Raymond Geddes Jr., recalls jumping only to see a farm house in the distance for a brief moment, before hitting the ground. It was the lowest parachute jump he ever made. His watch broke when he landed, freezing the hands at the time of 1:25 a.m. Many lesson were learned during these jumps that should have been worked out during training.

One example of these hard-learned lesson involved the jump gear. The paratroopers carried more than 60 lbs. of equipment each during the jumps, with much of it, including weaponry, attached with less than ideal tiedowns. As a result, many paratroopers on D-Day lost their important equipment when the tiedowns failed. This led to paratroopers having to run around in the dark trying to find their drop bags and weapons on the landing zone, all while behind enemy lines. 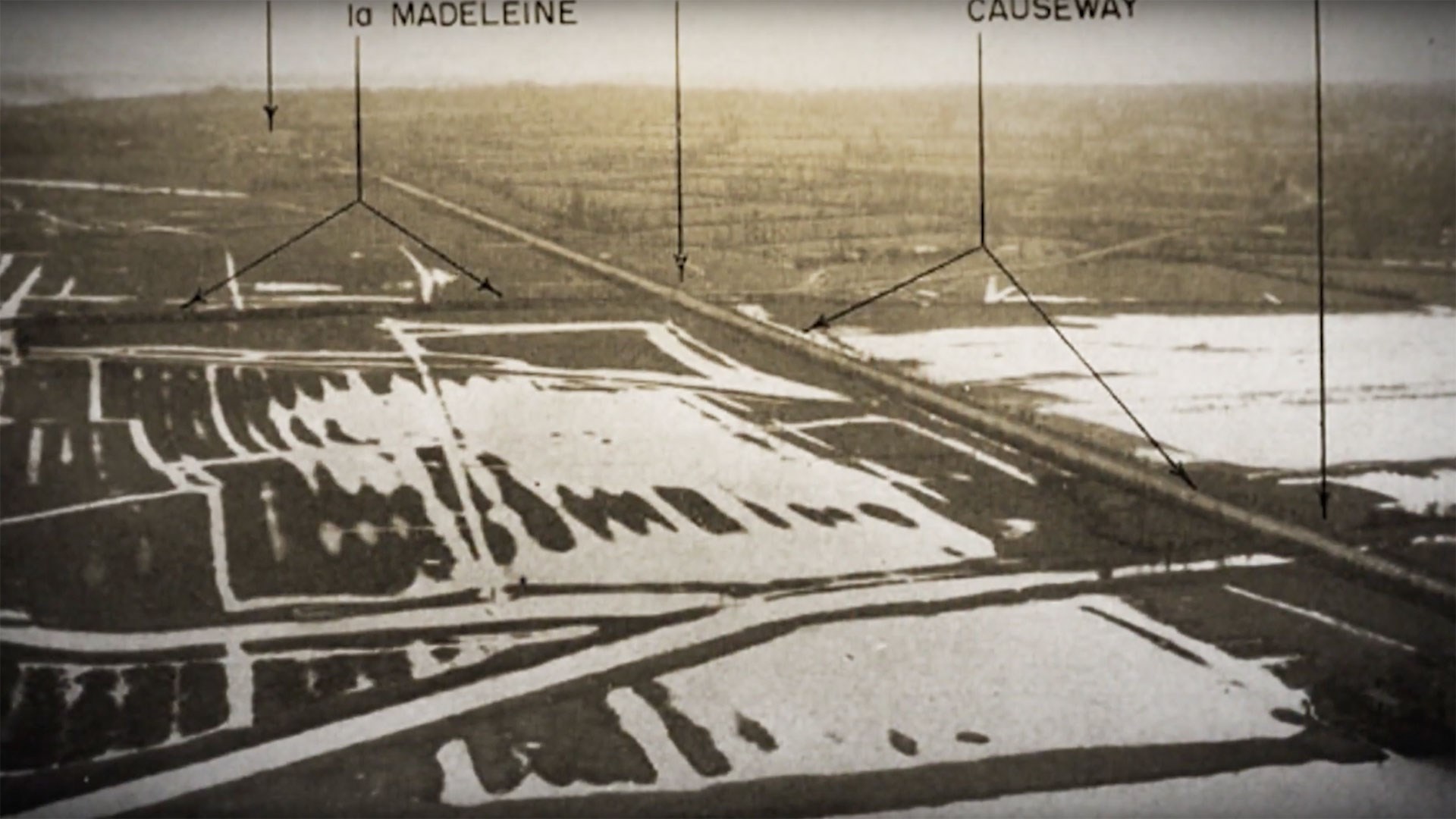 An aerial photo of the flooded plains behind Utah Beach, with causeways pointed out with arrows.

Just behind Utah Beach, the Germans had flooded the Normandy countryside, making the open ground impassable for the invasion forces to head inland off-road. There were, however, a series of causeways headed inland from the beach into various towns and cities inland. These causeways and their intersecting points became vital for moving forces inland, so the 101st Airborne was tasked with capturing the hubs.

On one of the causeways, leading from Saint Côme Du Mont into the outskirts of the city of Carentan, was a house on an intersection with a knocked out M5A1 Stuart tank on the side of the road. The body of the tank's commander was left hanging from the top hatch, leading to the place earning the nickname "Dead Man's Corner," a term coined by Don Burgett. 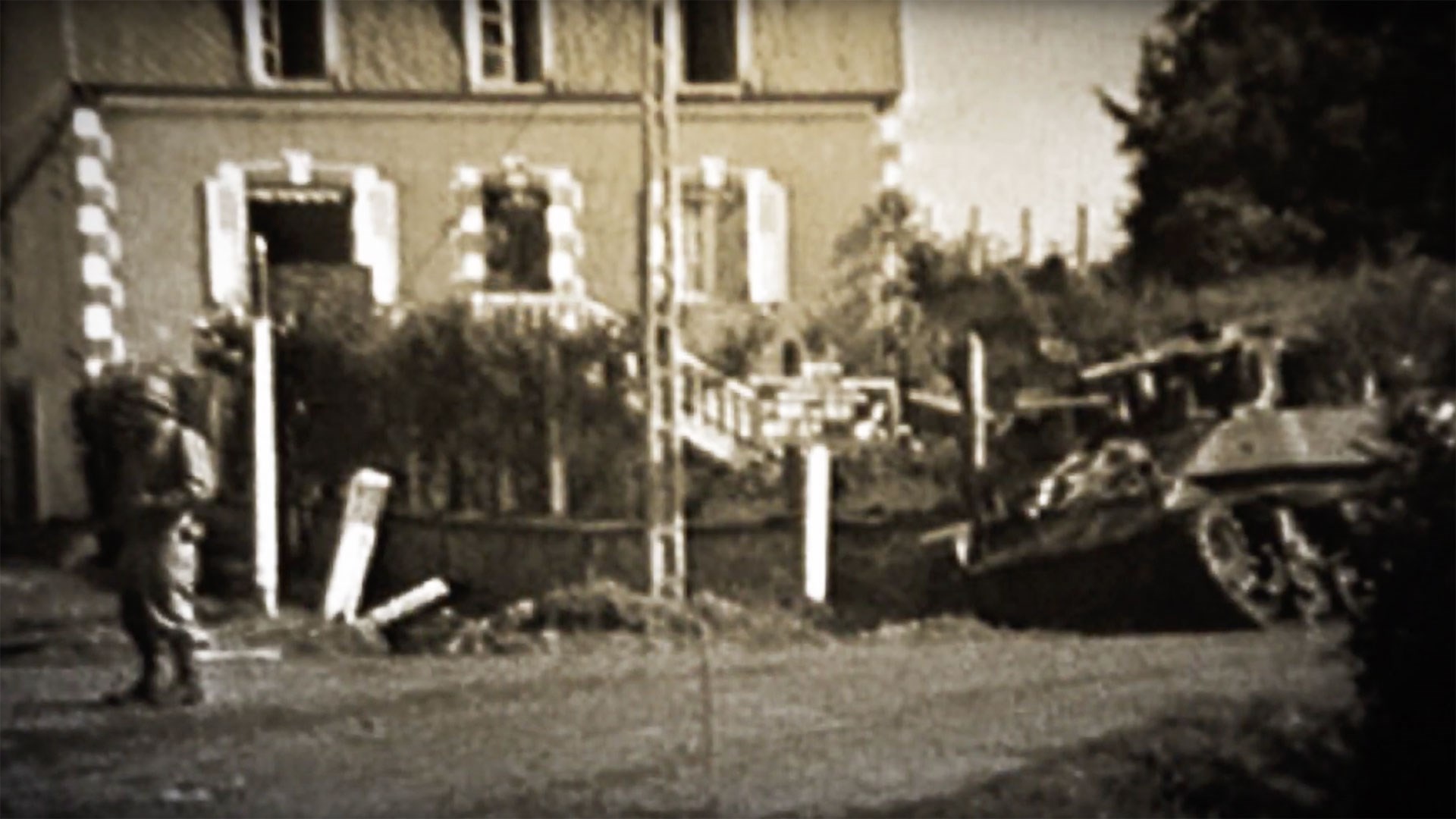 Ray Geddes recalled the site as his last combat experience of the war. Geddes was transmitting the orders of a superior over the radio to an observer while his group was at the "Dead Man's Corner," until the superior took the radio mic to talk for himself. Geddes moved off and was standing around with some of his comrades when an artillery round came thundering in. 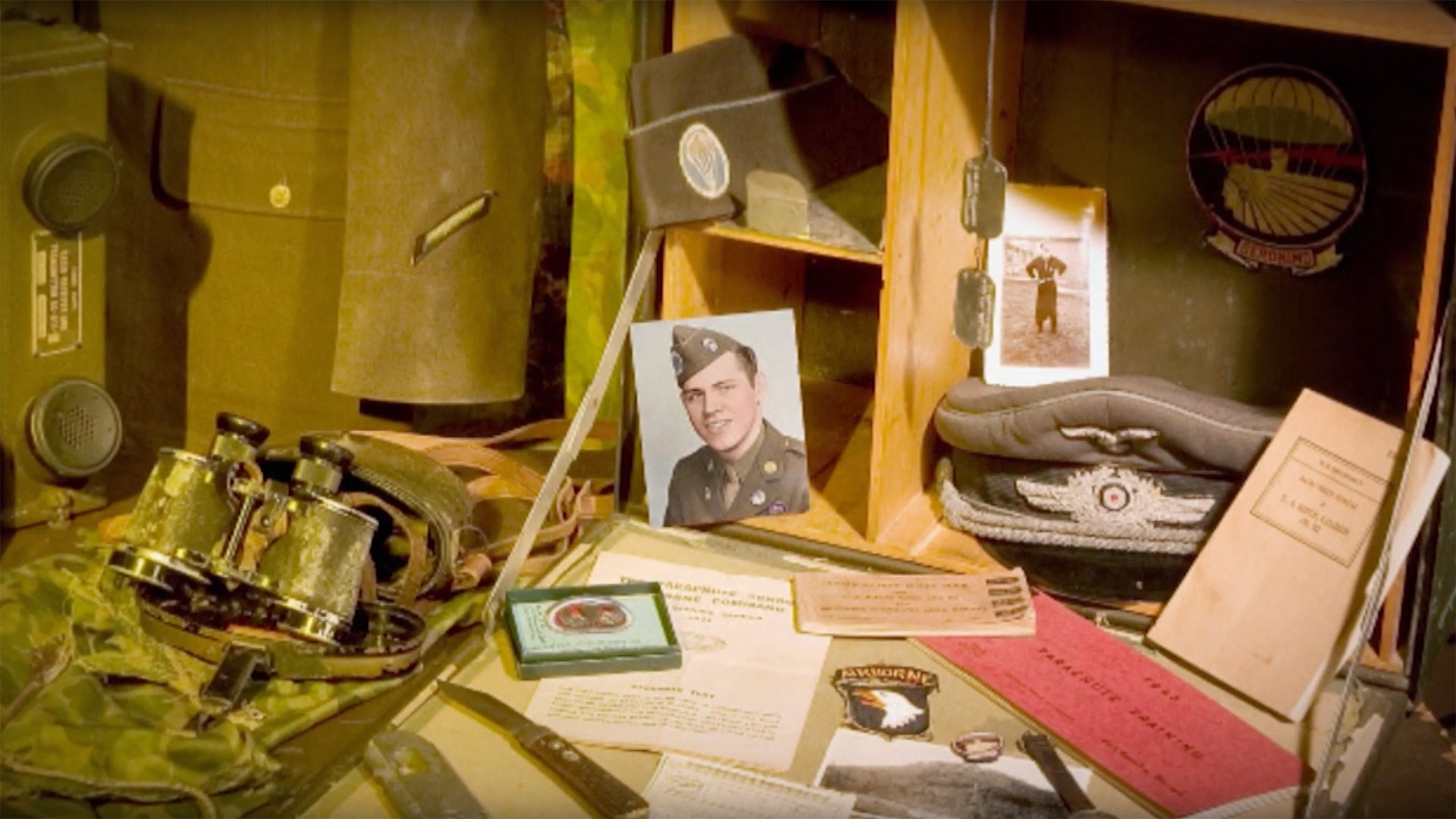 A display of items brought back from the war belonging to Raymond Geddes Jr., along with a photo of him in uniform.

Geddes was hit by shrapnel from the shell, with one piece hitting him in the eye. Wounded, he went down into the basement of the house full of surrendered Germans, where a German medic looked over his eye and gave some first aid. He was then evacuated on a jeep to the landing beaches and then taken to England by ship for medical treatment.

One of the most storied actions of the 101st Airborne on D-Day took place on the afternoon of June 6, as the U.S. Army forces landing on Utah Beach received an unwelcome surprise from the Germans in the form of 105 mm howitzer shells bracketing the beach. The howitzers were inland, hidden in a hedgerow near Brécourt Manor, in a location that was not known to the Allies prior. Elements of the 2nd Battalion, 506th Parachute Infantry Regiment, of the 101st Airborne were tasked to silence the German artillery. 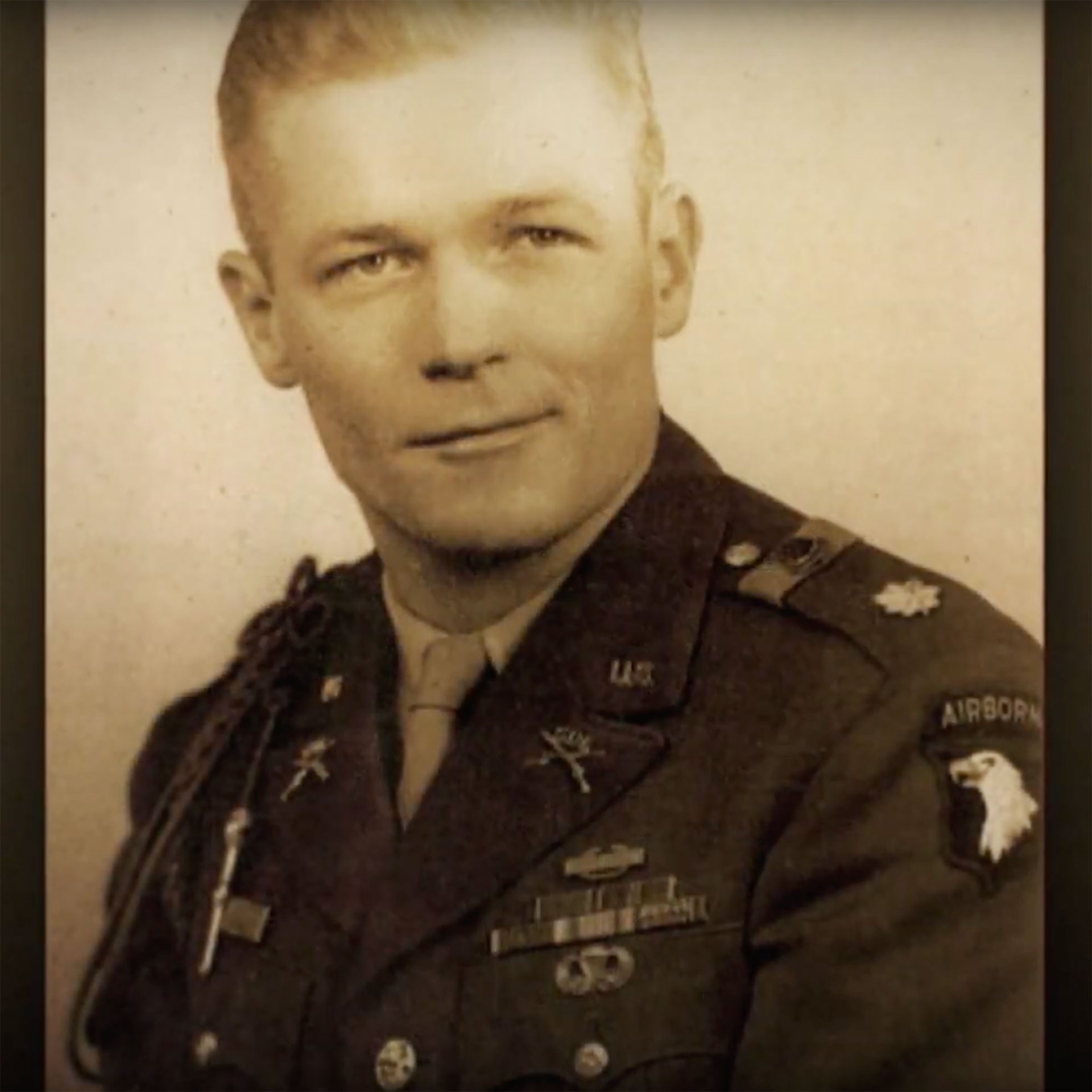 A photo of Richard Winters while in service.

Lead by Lt. Richard Winters, the acting commanding officer of "E" Company since the actual company commander was missing, a group of paratroopers found the positions of the German Howitzers and prepared an assault. Winters himself scouted the positions before formulating a plan of attack. A base of fire was set up, with an assault team that would move in and take out the individual gun positions. 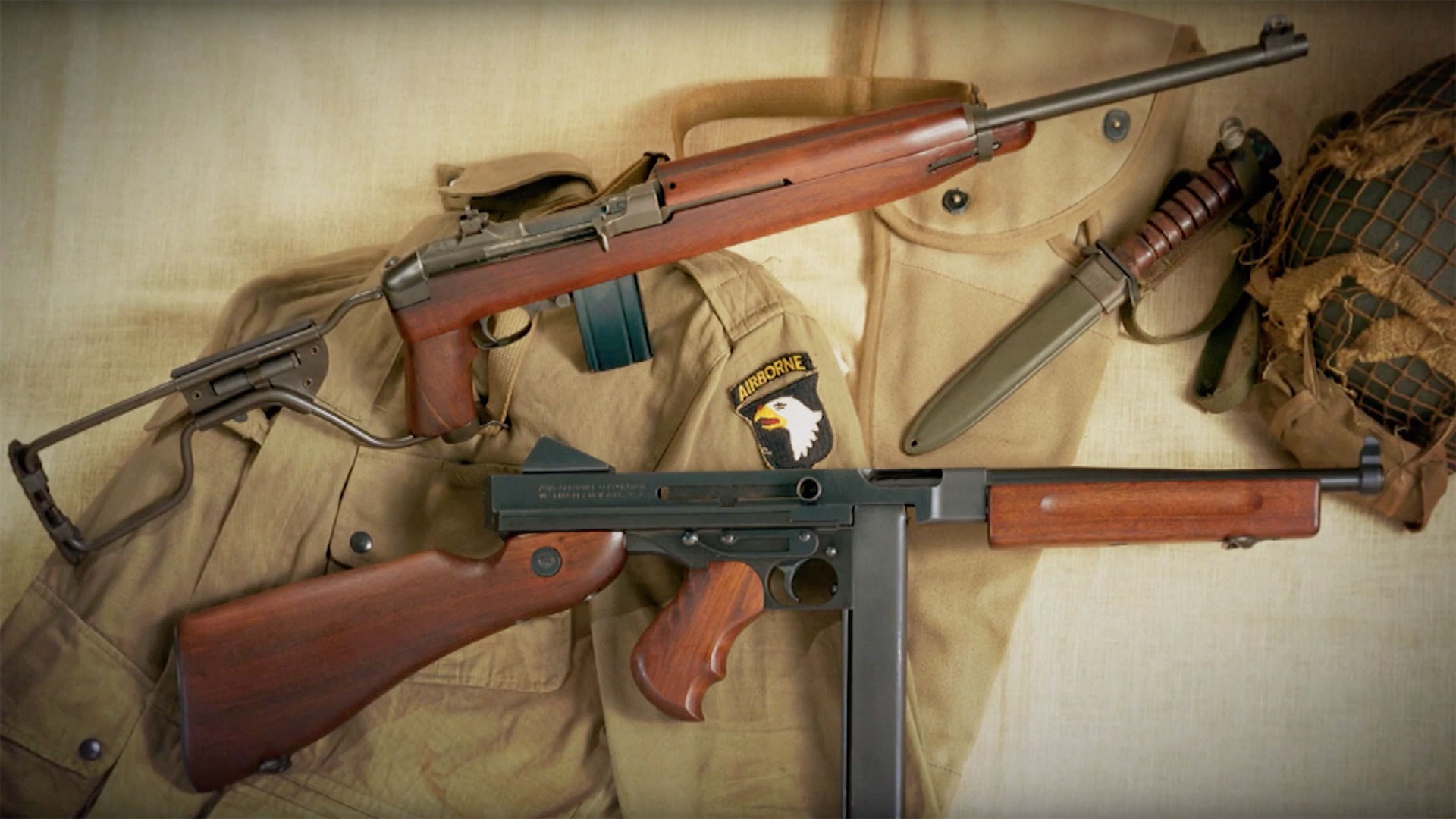 Two other men were tasked with climbing a tree and taking shots at the Germans with their M1A1 carbines. Over the course of the action, which ended up lasting several hours in total, Winters and his men successfully drove the Germans from the gun positions and Brécourt Manor, ending the howitzer barrage onto Utah Beach. For his leadership in the action, Richard Winters was awarded the distinguished service cross. This action was recreated in the HBO series Band Of Brothers.

When Ray Geddes went into the army on Dec. 11, 1942, he was issued a M1 Garand rifle. Even decades after his training, Geddes could still recall the serial number of his Springfield Armory M1, 987078, manufactured in November 1942. Geddes took good care of his first M1, which he carried during training and maneuvers in the United States before shipping out to Europe. After spending so much time with his rifle, he got attached to it. So, it came as a bit of a shock and disappointment for Geddes when they were told to turn in their rifles before shipping out. 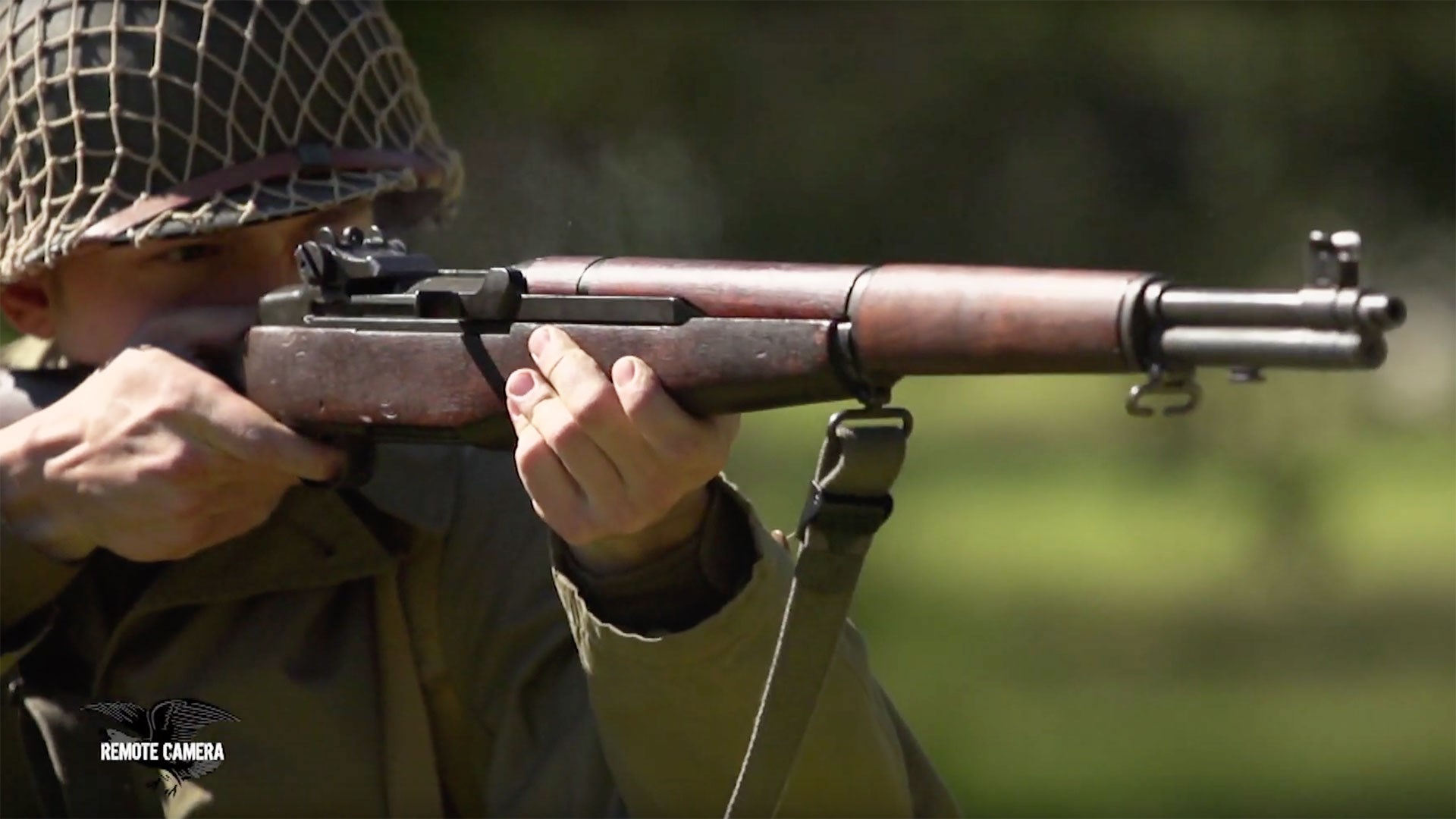 A reenactor dressed as a U.S. Army infantryman shooting a M1 Garand.

He was issued a new rifle when he made it to Europe, and admitted that he remembered nothing about the M1 that he carried for his short time in combat, other than the fact it was a rifle. Don Burgett was also issued a M1 Garand, and praised it as what he believed to be the "best rifle made." He noted that some would claim that the M1 had a tendency to jam, which he renounced from his own experience.

Instead of jamming, Burgett noted that sometimes the operating rods would crack at the 90-degree angle where the rod body meets the charging handle. When this happened, the charging handle part of the operating rod would separate from the rest and fall off, resulting in a useless rifle. Yet this issue wasn't overly common, and such a failure is was usually what would stop a M1 from working in combat instead of a jam. This issue was addressed after the war with the addition of a radius cut to the operating rod at the 90-degree intersection. 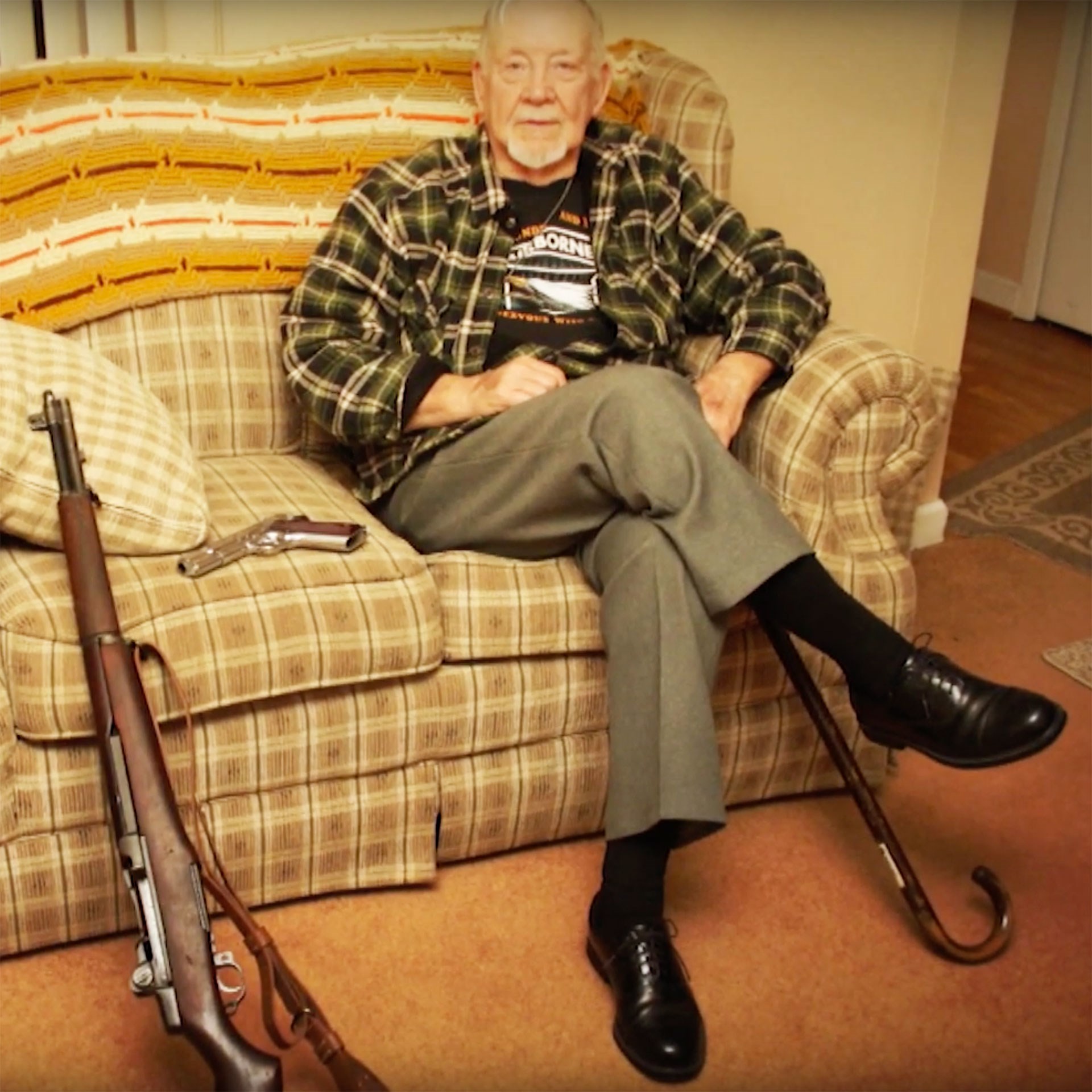 Don Burgett with his M1 and M1911 shortly before his passing.

In the case of such a failure, Burgett noted that a soldier didn't have time to try and fix his rifle, so typically they would be discarded and another one retrieved off of a dead or wounded comrade. Burgett remained an enthusiast of the M1 Garand for the rest of his life and was a NRA life member.

This article is dedicated in memory of Raymond Geddes Jr. and Donald R. Burgett, who were kind enough to leave their stories for future generations to learn from. Don Burgett passed away on March 23, 2017, at the age of 92, just a week short of his birthday. Ray Geddes passed away on Oct. 31, 2020, at the age of 96. Their heroism will not be forgotten
Posted by MrGarabaldi at 8:10 AM