"Why I escaped From Vietnam

I got this from "VietnamCherries" a website that is dedicated to the experiences from Vietnam.  I used to ask my Dad about a lot of the stuff on it to get his "Take" on it and I would add his "2 cents" to my blogpost to give it more of a backstory as were.  It feels weird putting up a Vietnam post and not asking him about it.  I will get better.  This was written from a South Vietnamese perspective. 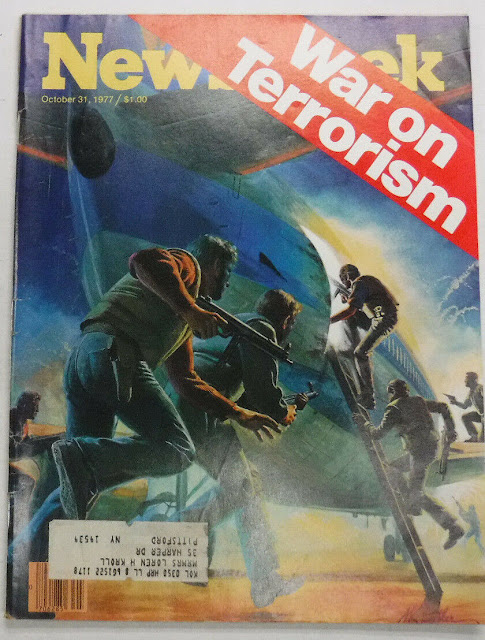 I clipped this pic off "Google", I actually remember this cover.

This article originally appeared in Newsweek, October 31, 1977, and was submitted to me for posting consideration by my friend, Bill Laurie. Much has changed since 1977, and the purpose of this post is to show what happened to the people after the South Vietnamese government fell in 1975. This story from one who was lucky to escape and reach freedom.

The government of Vietnam has accepted triumphantly its full United Nations membership, to the cheers of what Hanoi calls “progressive mankind” – the Communist countries, much of the Third World, and those in the West who opposed American Government policies during the war.

To a Vietnamese like myself, who detested the corrupt and repressive Thieu regime and considered the Communist victory a liberation, such an event should bring joy. But after living for nearly two years in Communist Vietnam, I feel precisely the opposite emotion.

I escaped from Vietnam to tell the world the truth about what is happening in my country. Within days after Hanoi’s troops came to my town, such widely proclaimed policies of the Viet Cong’s National Liberation Front as religious freedom, democratic liberties, peace and neutralism went out the window. Even the southern Communists were cast aside by northerners acting as conquerors, seizing all levers of power, inventorying and requisitioning everything.

For those bold enough to question, a vast network of prisons called “re-education camps” was established almost overnight – prisons where inmates were worked to death or starved. The prisoners included not only former Saigon military and civilian officials, but also many who opposed them – advocates of democratic liberties and a compromise peace. Apolitical professional, intellectual and religious leaders were also detained.

In my province, Phu Yen, alone, out of a total population of about 300,000, there were more than 6,000 prisoners in seven camps when I left Vietnam last spring. During the war the population of South Vietnam was estimated at about 17 million and was censused by Hanoi recently at about 24 million. If the Phu Yen prison population is characteristic of all of former South Vietnam, as is likely, from 340,000 to 480,000 could now be detained.

Outside the camps, many are unemployed and those with jobs can barely earn enough to feed one person, let alone a family. Thousands are press-ganged into nonpaying, ostensibly “voluntary” labor brigades working on roads, canals and irrigation ditches. Large numbers are forced to settle in remote, disease-ridden “new economic zones,” a population dispersal aimed more at political control than at economic development.

The economy is in shambles. What agricultural wealth there is in southern Vietnam is siphoned to the north or exported for foreign exchange. Southern people have had their diet deteriorate from rice to yam and manioc.

The new authorities rule by force and terror. What little freedom existed under Thieu is gone. The An Ninh secret police are dreaded – worse than any previous Vietnamese regime. There is no freedom of movement or association, no freedom of the press, or of religion, or of economic enterprise, or even of private personal opinion. Rights of habeas corpus, or of property, are either unknown or flouted even as the government redefines these rights. Fear is everywhere. An indiscreet remark can make one liable to instant arrest and an indefinite prison term.

America is partly responsible for the tragedy befalling the Vietnamese. While the US cannot, and should not, reintervene militarily, it can influence Hanoi to ameliorate the human rights situation, just as it has obliged Hanoi to make some kind of accounting for MIA’s. For example, virtually the entire An Quang Buddhist leadership has been arrested. As a Buddhist, I urge respectfully that Americans – certainly American religious leaders – express their concern publicly.

Many legislators active with me in opposing Thieu – and who were beaten and jailed by the Saigon government – are in prison again. These include democrats like Tran Van Tuyen, chairman of my opposition bloc in Saigon’s lower house, whose case was recently taken up, I understand, by Amnesty International. As a political leader myself, I appeal to American political figures to express their concern to Hanoi and call for the release of Tuyen and many others I could help them list. The three men I escaped with, incidentally, want to come from Japan to America to provide their own eyewitness accounts of the suffering in Vietnam, but they need assistance.

I appeal also for help to the thousands of Vietnamese boat people who perish on the seas in river boats never meant for the severity of ocean passage. At least half who make it to territorial waters reportedly drown as their flimsy boats go under. Who will rescue them if the United States does not participate? President Carter has agreed to accept at least 15,000 more Indochinese refugees, for which we are grateful. But a rescue project to pick  people off those boats on the high seas is also needed.

Let me mention energetically people whom I once opposed during the war: those who worked directly or indirectly for the United States. The US has responsibilities regarding the fate of these people, comparable to the principle that American marines are said to have of not deserting their wounded.

To tell Americans what I have just said, I left my wife and children and risked my life on the seas. I appeal to Americans on behalf of the human rights of my people: please do not mute your voices on this subject. Before I escaped, there was great interest in my country in the human rights stand of President Carter and other Western leaders. Vietnamese listen attentively to the Voice of America and the BBC. The cause of human rights comes up very often in conversations. Where hope is a rare commodity, the news that the world is watching, and cares, provides moral sustenance.